Perhaps it’s appropriate on our travels in Africa that we pause for a moment to meet some of the people. Here’s an account of a lesson in Congo Poli Sci 101, delivered by a Mr. Kasongo:

Young USIS officers new to the country, Al and I walked across downtown Léopoldvlle to a press conference. There we received a lesson in Congo Poli-Sci 101.

Soon the demonstrators returned. They handed out leaflets. They shouted more abuse. They booed. They hissed. They scoffed. Mr. Kasongo kept reading. A middle-aged woman sauntered down the aisle. She gazed at Mr. Kasongo. He did not gaze at her. She turned her back on him, bent over, and lifted her skirts. She displayed for him her large bare behind. Titters rippled among the Congolese reporters covering the event. Mr. Kasongo kept on reading.

Two more women came forward. Mr. Kasongo glanced at them. They turned their backs, bent over and displayed their behinds. Mr. Kasongo continued to read. The first woman, now halfway up the aisle, turned, face-forward to the politician, and raised her skirts to her waist.

The Congolese newsmen giggled. I wondered if people would throw things. Al whispered: “Whatta we do?” I glanced around for the nearest window to jump through.

But it was hot. The heat produced a listlessness. The demonstrators settled into seats. Mr. Kasongo read on. Finally he finished his statement. Reporters asked questions; he answered them. When he left the hall, the demonstrators rose. They followed him outside. When he got into his chauffeur-driven Mercedes, they jeered, scoffed, hooted.

Al and I walked back to the office, laughing.

What was Donanne doing while Fred was getting his bearings in the Congo? After finishing her sophomore year at Principia College in 1962, Donanne flew to Bogota, Colombia, to join her parents. Her father, Don Ralston, was then a member of the State Department’s inspection corps looking at embassies and consulates in Latin Anerica. During that summer she visited Panama, Costa Rica, Nicaragua, Honduras, El Salvador and Mexico. Needless to say, inspectors and their families are always treated well. The summer after her junior year at Principia Donanne stayed with her grandparents in Redlands, California.

Next post: Serving in Bukavu in the eastern Congo, Fred is desperate to see African animals before being transferred to Coquilhatville. Can he manage it? 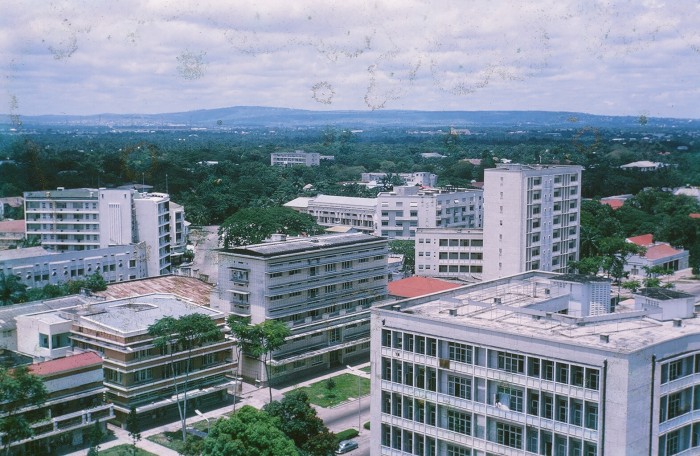 Previous posts can be found in the Archive.