When Fred Hunter arrived in the Congo as a young US Information Service officer, transferring from a post in Brussels, Belgium, a surprise awaited him.

My assignment had been changed. That was the first thing I learned on arriving in the Congo. I would not be going to the USIS post in Elisabethville. Instead I would be opening an American cultural center in a town called Coquilhatville, the former capital of the Belgian colonial province of the Equateur. Open a post? Are you kidding? I’d just come off a training tour in Belgium. But no one was kidding. Off the record I was told, “Coq’s a pisshole.” The more senior officer who’d been assigned to open the post had refused. In joining USIS I’d agreed to serve anywhere. So I would go. 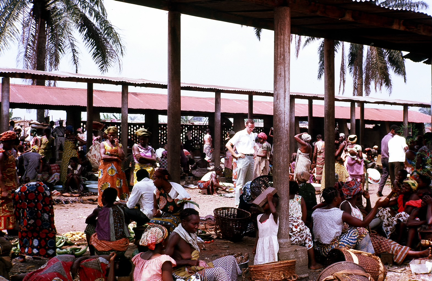 During my first week in the Congo I visited Coq, this after three days in Bukavu where the USIS post was already open, but without a USIS officer. The man assigned to Bukavu had resigned rather than serve there. Curious, since Bukavu was truly a beauty spot.

Cliff, the branch post coordinator, and I flew into Coq on an embassy plane for a three-hour stop to deliver supplies. After we left them at the empty house which I was to convert into a center, there was just time enough to get a postbox. We walked along one of the town’s three paved streets and then stood out of the sun on the porch of a Portuguese dry goods store. Cliff pointed across the street.

“There’s your vegetable market,” he said.

The windowless building stood baking in the African sun and I wondered if Cliff were taunting me. Heat shimmered off the corrugated iron roof.

“Any vegetables in there must be cooking,” I remarked.

Cliff smiled. “We provide adventures in eating,” he said.

Presently a woman emerged. She carried a baby tied to her back. A white enamel pot rode on her head among spines of kinky hair. A friend called to her. She shot out a burst of babble and laughed. I liked the deep-throated spill of sound and I wondered if this woman and I would ever gossip over the carrot bin.

When my neighbor-to-be passed below us, I saw she carried in the pan a magenta cabbage, a bundle of leaks tied with a vine, a few onions and several dirt-covered carrots.

“That really is the vegetable market,” I said.

“Didn’t you believe me?”

We went down the street to where a crowd of pensioners clustered outside the post office. Former colonial soldiers, they sat on their heels, the pension books open in readiness for young postal clerks to holler their names and deliver the checks. Behind them – separated by more than mere space – errand boys and government clerks leaned on bicycles or crouched in seeming slumber on the post office steps.

As we approached, some of the old men rose submissively and saluted, “Bonjour, patron! Bonjour, patron!” They held themselves rigid until we, quite surprised, acknowledged their undeserved respect. The clerks and schoolboys watched this scene without moving, then returned to their conversation and slumberous waiting. In the newly independent Congo white men like us had nothing to do with them.

There was no line at the wicket marked “Post Box Rentals.” Instead, teenaged boys pushed against it, enjoying the cool air and the mystery of postal transactions. A clerk who had reached maturity under colonial rule regarded me over the heads of the boys. “Oui, Monsieur?” he asked.

“I’d like to rent a postbox, please,” I said in noticeably accented French.

“You are English?” he asked, taking me for a Briton in from a Lever palm oil plantation.

He examined me closely. My teasing had amused him, but suddenly his expression grew shy. He leaned forward and quietly asked, “You are a missionary?” It was a serious moment. Our relationship had entered a crucial phase of testing. I explained about the cultural center. The postal clerk smiled, clearly pleased. We had become brothers.

Then he resumed his professional role, speaking in a manner that solicited the teen-aged boys’ attention. They watched, fascinated, as he assigned me a postbox. “It is next to the box of the American missionaries,” he confided. It was as if he had arranged this specially for me.

“The people seem friendly,” I told Cliff when we got outside.

“Very friendly.” He wiped his forehead, ready to return to his air-conditioned office in Léopoldville, the country’s capital. “You’re going to like it here.” Again the banter edged with a taunt. It’ll be good for your character.”

When we returned to the capital, I wrote a letter to my family, trying to piece together aspects of what I’d seen. “I couldn’t help wondering,” I wrote, “if in giving Africa our technology (which is, after all, the big material resource of ours) we also had to insist that it accept our ideas. It might be interesting to give these people the means of material development, the means of wiping out hunger, disease, ignorance, filth, without telling them what to think. Maybe they would develop instructive ways of coping with problems that afflict us.” I also expressed concern that “the US is coming awful close to running the show down here. We are backing a political leader who really has no strong public support, and we are doing things to strengthen his political future. (Things that could backfire should he tumble from power.)… We seem to have chased the Belgians out of here and volunteered for this costly job ourselves.”

But I did not go immediately to Coquilhatville. A warm body was needed to supervise the USIS operation in Bukavu. I was sent there instead.

What was Donanne doing while Fred was getting his bearings in the Congo? After finishing her sophomore year at Principia College in 1962, Donanne flew to Bogota, Colombia, to join her parents. Her father, Don Ralston, was then a member of the State Department’s inspection corps looking at embassies and consulates in Latin Anerica. During that summer she visited Panama, Costa Rica, Nicaragua, Honduras, El Salvador and Mexico. Needless to say, inspectors and their families are always treated well. The summer after her junior year at Principia Donanne stayed with her grandparents in Redlands, California.

Next post: Fred gets a lesson in Poli Sci 101, Congo style.

The previous two posts detailing Donanne’s trip from Cape to Cairo can be found in the Archive.