When Fred Hunter arrived in the Congo as a young US Information Service officer, he was sent first to Bukavu on the eastern froniter, then was told he must go to the northwest to open a cultural center in Coquilhatville. Before leaving the Kivu, he wanted to see some African animals. Defying instructions, he headed toward Parc National Albert with Charley, the commo man at Bukavu’s US Consulate, and Paul, a charming African wheeler-dealer who worked for USIS. They saw animals and got stuck in mud, badly stuck…

Charley and I scurried about, uprooting marsh grass and breaking up a small tree, trying to find anything that would give the tires some purchase. Wearing a tie and office slacks, Paul kept his distance from the mud. He shouted suggestions. The guide feigned efforts to help us, but kept his eyes on the hippo wallow. “C’est très dangereux,” he said again. Nothing was supposed to block hippos’ access to water. We continued to push at the truck. But nothing worked. It was stuck fast.

The sun moved behind the mountains and light was disappearing from the sky. Our options were not attractive. We could not hike back to Ruindi Camp. It was too far; before long the night would be so black we could see nothing. Wild animals, however, could see us. It was unlikely that anyone from camp would come looking for us; the camp staffers had no vehicles. We could spend the night in the truck, hoping that curious hippos did not push it over. Or we could try reaching the fishery at Vitshumbi. With luck we might get there before nightfall – if angry hippos did not come after us.

We started for the fishing village. How far was it? Should we run? Could we? Suddenly hippos began to grunt. They surrounded us. There was no cover, no trees to climb. So we ran. And walked. Walked and ran. We hoped that hippos, which are said to have bad eyesight, would lose us in the twilight.

Darkness descended. Fortunately, lights came on in Vitshumbi. We hurried toward them, walking, running. Finally we came upon mud-and-wattle huts, then more permanent one-room structures. Villagers looked up from cookfires, surprised at four spooked figures stumbling out of the darkness. Paul asked for the director of the fishery. An African led us toward a lighted building with a porch overlooking the lake. On the peak of its roof perched half a dozen marabout storks.

On the porch sat a group of people having aperitifs: a Belgian of middle age and a family of East Indians. The Belgian stood squinting as we came out of the darkness onto the porch. An Indian woman, enough younger than the Belgian to be his daughter, rose to her feet, a quietly attractive girl, slender, but full-breasted. In the dim light and for smelly, deserted, end-of-the-world Vitshumbi she was very beautiful. I knew what Charley was thinking: “Heifer! Heifer!”

We all stared at one another. Then Paul laughed and exclaimed, “Ah! C’est toi!” The Belgian studied him, then grinned and stuck out his hand. “Tu habite ici, eh?” Paul asked, using the familiar form. “You live here, do you?”

“What’re you doing here?” the Belgian asked, responding in the familiar form. He and Paul shook hands.

It turned out that during “les troubles,” when the Kivu was in turmoil immediately after independence, the Belgian had fled and Paul had rowed him across Lake Kivu to safety in Rwanda. Now the Belgian introduced his wife, the beautiful young woman. Her family was visiting, she explained. She offered us drinks.

As we relaxed on the porch, chatty and relieved that we had escaped, we could hear the motor of an invisible boat fishing out in the lake, using the village lights to steer by. Wallowing hippos grunted nearby. A pair of them waddled ashore below the house. Villagers shooed them away like stray dogs. The Belgian had a large Volvo truck brought around for our use. We headed back into the park, accompanied by a dozen villagers. Certainly now we would extricate the film truck. 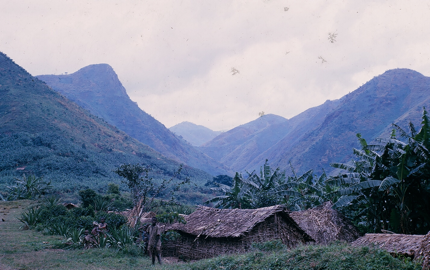 On the road to Goma

We took a dry route to reach it, Paul directing the expedition, drawing on experience gained in driving around Bukavu nightclubs. We passed indistinguishable animal shapes. A tree that moved turned out to be an elephant. We caught the glowing eyes of animals in our headlights and had to extinguish them when they charged us. As we neared the film truck, the Volvo got stuck in mud. I wondered if Paul were really the man to be in charge, but we dislodged the truck easily. Then we came close to getting stuck again.

“This is crazy!” I yelled to Charley. “Paul doesn’t know what the hell he’s doing.” He agreed. “C’est fini pour ce soir!” I shouted at the top of my voice. We were finished for the night. I would not risk miring the Volvo truck. We returned to Ruindi camp.

We had locked our cabins well and had left the keys to them in the film truck. We bedded down in other quarters in muddy underwear. I did not sleep. I stared at the night. I said prayers and worried about what would happen if we could not get the film truck out of the mud. Would leaving it stuck in Parc Albert cost me my job? How would Léo react to learning that I’d gone dancing off to see animals when I had been specifically instructed not to? Would I be sent home from Africa in disgrace?

At dawn we were back out at the film truck. With men to help us and long planks for traction, we pushed it out in short order. We thanked our helpers and sent them back to Vitshumbi. I’d escaped again! Léo need never know I’d been to Parc Albert! I was so elated that I was ready for another game run, for the circuit where we could see lions. But Charley had had enough and Paul was anxious to return to the arms of his amie in Goma. We were back at the Hotel des Grands Lacs by noon.

Late that afternoon while the others relaxed in Goma, I drove out to Saké to see if I could find the parents of my friend Murielle de Munck.

What was Donanne doing while Fred was serving in the Kivu? After finishing her sophomore year at Principia College in 1962, Donanne flew to Bogota, Colombia, to join her parents. Her father, Don Ralston, was then a member of the State Department’s inspection corps looking at embassies and consulates in Latin America. During that summer she visited Panama, Costa Rica, Nicaragua, Honduras, El Salvador and Mexico. Needless to say, inspectors and their families are always treated well. The summer after her junior year at Principia Donanne stayed with her grandparents in Redlands, California.

Next post: Fred calls at a plantation near Goma and happens on to the owners, parents of a girlfriend of his in Washington, D.C.

Parts One through Four of Kivu Safari and other previous TIA posts are available in the Archive. You can find it at the top left of the home page.