When Fred Hunter arrived in the Congo as a young US Information Service officer, he was sent first to Bukavu on the eastern frontier. Then he was told he must go to the northwest to open a cultural center in Coquilhatville. Before leaving, he wanted to see some African animals. Defying instructions, he headed toward Parc National Albert with Charley, the commo man at Bukavu’s US Consulate, and Paul, a charming African wheeler-dealer who worked for USIS. 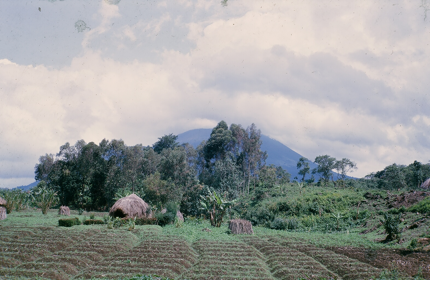 Farm on the road to Goma

Charley, Paul and I left Bukavu for Goma at noon Friday. It rained off and on all day. We left the paved road 35 kilometers out, drove past clusters of banana-frond huts, away from the lake and back beside it, climbed the escarpment. Almost at the top, we stopped to stretch. When we were ready to start again, the battery was dead. Ugh. We rolled the truck backwards and started in compression in reverse. We drove on, up the escarpment and down it. The motor kept cutting out. As long as we were on an incline, we had no problem restarting in compression. But the motor died as we moved along the water’s edge. We got out. We pushed the truck, but could not move it fast enough to restart it. The rain began again. We corralled a passing African, a banana frond over his head as a rain hat. He helped us push, again in vain. A European came along. Using bush ingenuity, we restarted the truck by putting the battery from his Land Rover onto our mount. Once the motor was running, we reinstalled our battery – all while the engine was turning.

We went on. The rain grew heavier. When we stalled again as light was fading from the sky, ever-resourceful Paul went to find help. He returned shortly with two Europeans: a planter in a slicker, his trousers rolled-up, a woman’s plastic fold-up rain scarf on his head, and a Brit who worked at a Lipton Congo plantation near Goma. The Brit pushed us with his Land Rover; we got started again in compression. The Brit offered to follow us as far as his turn-off and we found that it was not difficult to keep the truck running in second gear.

We drove on through darkness and rain. At Saké we hit pavement again, but I could not make out a turn-off to the De Muncks’ plantation. [Murielle de Munck, a young woman I had dated seriously in Washington, had grown up on that plantation.] Approaching Goma, we could see the red glow atop Nyiragongo, the active volcano that sits behind the town. We lost the Brit’s headlights before entering the town and were unable to thank him for sparing us a night in the truck.

The hotel was splendid. But once we had showered and eaten, Paul could not wait to get to a nightclub. He led Charley and me to a brightly-lit room in a building on the main street. Of course, he made an entrance. The copain of white men, he shook hands with everyone, explaining to all that we came from Bukavu.

The bar was full of crudely-made wooden tables and chairs circling a dance floor. Stick-figure paintings adorned the walls. Congolese men sat stolidly with tall brown bottles of Primus beer before them. They eyed the predatory young women who sat across the room, eyeing them back, measuring their victims. The room was stuffy and smelled of beer. Music played, a steady cha-cha beat, but no one danced. Most women – girls really, some no older than middle teens – wore Congolese dress: elaborately tied headcloths, bodices of patterned material, cloths tied about the hips with second cloths draped to emphasize the size and succulence of those hips. Others wore European clothes.

The women knew why most men came to the bar: to find a companion for the night. But Charley and me? It was not clear to the women – nor was it probably to us – why we were there. Had we come for companions? Or merely to drink and gawk?

But it was obvious why Paul had come: to spend money, to make an impression, to carry off the best-looking girl in the place. Soon a candidate approached. She was very pretty with lustrous skin, flashing eyes and a bad case of the giggles. She was clad à la européenne: a white dress with large blue polka dots and a tight waist displaying a body that had not yet begun to thicken. In the light of the room her aureole of combed-out hair shined like a gray mist about her head. She slid onto Paul’s lap. She put an arm around his shoulder. She kissed his cheek. Paul smiled. He gave Charley and me a what-can-I-do? shrug and became as giggly as she was.

Charley watched Paul getting the Big Man treatment. I wondered if he wanted it, too. Charley had boasted to me that he and Paul had gone “girling” together before I arrived even though their friendship lacked a common language. Charley spoke no French, Paul no English. Their conversations were uncomplicated. Charley would mime holding a Primus bottle by its neck, bringing it to his mouth and tilting his head backwards as if to drink. “Primus. Mademoiselle,” he would say to Paul. Paul would answer: “Let’s go!”

“Not heifers,” Charley said. “At least not these heifers.”

We left Paul to be the Big Man in Goma and walked back to the hotel.

The battery repaired, we headed out of Goma through slowly rising countryside, watching three volcanoes jut into clouds. We traveled through country given over to tea, coffee, banana and quinine plantations. We reached Parc National Albert by early afternoon, coming off the Rift Valley escarpment from Rutshuru and moving out onto a long, wide, seemingly empty plain where grass in some places grew higher than our heads. We drove beside a flat-bottomed stream that cut across a rust- and dark orange-colored gulch through the plain. Paul claimed he sighted hippos in his binoculars. Oh, sure. We stopped. Damned if he wasn’t right. Hippos! Excitement overtook us, the elation of kids. We drove close to their pool, jumped out of the truck and gawked at them, creatures that seemed a cross between a rubberized pig and a Michelin-man horse. From the water in which they stood, they watched us, a mother nuzzling her young one. Sometimes one of them would arch back its neck and open a gigantic pink mouth. Each jaw had the shape of a huge guitar. “Ho, Mama!” Charley said. “Those jaws could take a fender off this truck!”

As we crossed a bridge into Ruindi Camp, a tree burst suddenly into life. Branches waved. Leaves rustled. Baboons! The road jumped alive with creatures scurrying in all directions. Hairy, suspicious faces turned around to observe us across hairy backs which ended in hairless rumps of shiny leather.

After settling in at camp, we went for a game run with a guide in the late afternoon. We saw a herd of about fifteen grazing elephants, females with young; then at the distance of about 25 yards we came upon a lone bull. I was sitting atop the cab of the truck and watched him with amazement. In the immensity of the plain with mountains rising on the horizon, the bull did not seem enormous. Still, he dwarfed the film truck. I felt an awe at being so close. The elephant observed us, uninterested, and moved on.

We noticed waves of motion in the grass, then made out pig snouts moving at the head of the waves and tall tails at the end of them. These were scampering wart hogs, their ears and their long tails erect in the air. Antelope watched us. Some, possibly elands, had tawny hides and spiraling horns. Others, topis, stood with their front legs seeming half again the length of their back ones, their hides red and black. When they ran from us, the difference in leg size produced a strange, yet graceful stride. We saw monkeys and more baboons, waterbuck and more hippos. And Cape buffalo with their wide boss of horns. “Ce sont très dangereux,” murmured the guide, eyeing them carefully.

Then with Charley driving, Paul and I suddenly spotted a huge shape in a mud hole from our position on cushions atop the cab. The mud hole was just large enough to contain this shape and it emerged, a huge hippo, freshly coated in mud. It glinted in the sun, a plodding blob of light, and moved away.

Finally we reached Lake Edward. We stopped, left the truck, stretched and watched waterbuck and pelicans, bathing hippos, monkeys on the beach and fish eagles perched in the tops of trees. Paul pointed off along the shore of the lake. “There’s a commercial fishery over there,” he said. “Vitshumbi. An interesting place to visit.” I did not see it; I did not want to see it. I had come to commune with animals and did not want to think about the works of man.

We were a mere handful of miles south of the Equator. Here sundown always fell promptly at 6:00 p.m. It was already well after 5:00. Starting back toward Ruindi, we moved slowly along a track that led beside Lake Edward. We were between the lake and, fifty yards off, a dozen hippos lolling in a wallow. Charley braked at the edge of an iffy section. It had rained the day before and there was mud everywhere. He hesitated, then started across a patch of mud. Five feet into it, the truck sunk. It settled to its axles in mud.

Charley insisted the guide had assured him we could get across.

“You think the guide drives a lot?” I asked.

“The truck has four-wheel drive,” he noted. “You know how to use it?”

We pushed. Impossible. Charley and I scurried about, uprooting marsh grass and breaking up a small tree, trying to find anything that would give the tires some purchase. Wearing a tie and office slacks, Paul kept his distance from the mud. He shouted suggestions. The guide feigned efforts to help us, but kept his eyes on the hippo wallow. “C’est très dangereux,” he said again. Nothing was supposed to block hippos’ access to water. We continued to push at the truck. But nothing worked. It was stuck fast.

The sun moved behind the mountains and light was disappearing from the sky. Our options were not attractive. We could not hike back to Ruindi Camp. It was too far; before long the night would be so black we could see nothing. Wild animals, however, could see us. It was unlikely that anyone from camp would come looking for us; the camp staffers had no vehicles. We could spend the night in the truck, hoping that curious hippos did not push it over. Or we could try reaching the fishery at Vitshumbi – if angry hippos did not come after us. Hmm…

Parts One through Three can be found in the Archive under Kivu Safari.