When Fred Hunter arrived in the Congo as a young US Information Service officer, transferring from a training post in Brussels, Belgium, he expected to serve in Elisabethville in the copper-mining region of Katanga. He never got there.

This is what happened instead. 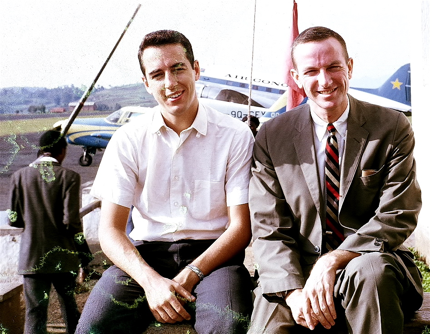 When I entered the Congo, the national collapse of the first days of independence three years earlier had set the country’s fate for the foreseeable future. I arrived in Léopoldville, the capital, assigned to Elisabethville in the Katanga, the country’s second city. There I would run an American Cultural Center. But my assignment had been changed. I was to go to Coquilhatville in the Equateur, the country’s northwest region, its remotest area, to set up a cultural center.

At the time the Congo’s reputation for danger, chaos and unpredictability was so great that USIS had difficulty finding officers to staff its operations anywhere in the country. The cultural center in Bukavu had been without an American director for five months. Since the Coq center was without equipment, USIS Léo shipped me off to the Kivu, to Bukavu, on the eastern frontier with Rwanda.

What a glorious place! Surely, Bukavu was then one of the beauty spots of the world. Sited on peninsulas stretching into Lake Kivu, green and surrounded by mountains that receded, one blue range after another, all the way to the Mountains of the Moon, it nestled on the backbone of Africa. My job was to direct the center’s work until a suitable and more senior officer could arrive. I was, in other words, to be the “American presence” at the center, the guy who made sure that the Congolese “locals” did their work.

I had been in Bukavu hardly six weeks when bureaucratic alarm bells sounded. It turned out that USIS’ parent, the Information Agency in Washington, had inadvertently misinformed Congress, reporting that a USIS officer was on the ground in Coquilhatville. That he had already established a cultural center, a tiny light in the Great Darkness of the jungle. That from this small outpost against Communist encroachment on the Dark Continent he was now providing information about freedom and democracy to black masses yearning to breathe free.

Alas! none of this was true. But what if an obscure Congressional staffer discovered this fact? The staffer might jump to the conclusion that USIA had intentionally misled the Congress. A crisis might erupt. Charges of bad faith might fly. So instructions went out from USIA: “Get a body into Coquilhatville.” The body was mine. USIS Léo instructed me to leave Bukavu ASAP.

I doubted that I would ever return to the Rift Valley. So I requested leave to see the animals of East Africa. But the bureaucratic need was so urgent that the request was denied. Still, the Consul had an idea. He and his family were taking a weekend trip to Usumbura (now Bujumbura), the capital of neighboring Burundi. They would be gone three days. Charley, the Consulate’s communications man, in whose apartment I lived, would have few duties that weekend.

“Charley needs to get out of town,” the Consul said.

Charley had been seeing Chantal, a blonde twenty-one-year-old Belgian girl whose mother was trying to find her a husband. The relationship had become passionate. The USIS film truck gave evidence of this fact. Late one evening while maneuvering Chantal into an accessible position, Charley had removed the knob on the truck’s gear shift. In his passion he threw it out the window. He told me: “I wouldn’t want my Mom to know what I do with that heifer.” Charley invariably referred to young ladies as “heifers.” The Consul’s wife worried about Charley’s susceptibility to Chantal’s wiles. Even Mlle Moutarde, the Consul’s Belgian secretary who lived with Bukavu’s Volkswagen dealer, had warned of the spider’s web being spun by Chantal’s mother, Mme DeTree.

“Why don’t you take the film truck to Goma?” the Consul suggested with a grin. “I’d like to know how that road is, but I sure don’t want to test it myself.”

Goma lay at the north end of Lake Kivu. From there we could dash up to Parc National Albert, the Congo’s premier game reserve. I could see elephants and hippos, maybe even lions. If the trip were questioned, I could claim to have been making contacts for program activities. Few tourists had visited the park since independence. “You’d have the place to yourselves,” the Consul said.

Next post: The trip to Goma/Parc Albert gets hatched.