Before leaving the eastern Congo to set up an American Cultural Center in Coquilhatville deep in the jungles of the northwest, Fred Hunter wanted very much to take a look at animals north of Bukavu. With the American Consul’s encouragement, he recruited Charley, the Consulate’s commo man. Charley was game, but only if Paul came along. 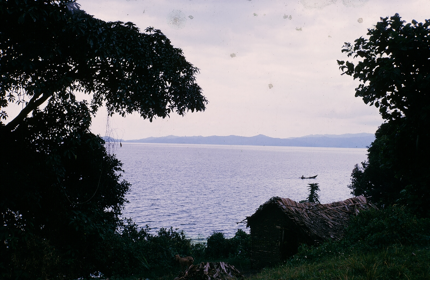 Lake Kivu from the Goma road

Wemboyendja, Paul. This was the Paul Charley meant. Wem-boy-end-ja. Not a hard name to pronounce once you struggled with it for a while. Paul was the center’s projectionist and film truck operator. Also a wheeler-dealer and a suave ladies’ man.

My colleagues in Léopoldville considered Paul a real find. They all claimed he had “great contacts,” not the least with Kivu Europeans, some of whom he’d helped escape across Lake Kivu during “les troubles” after independence. Before USIS Bukavu hired him away, Paul had worked for the Kivu Information Ministry. Before that he had served as a Lomani District delegate to the Congo’s first constituent assembly. He had also been sufficiently influential (whatever that meant) to get beaten and tossed into prison when Patrice Lumumba’s men and his Mouvement National Congolais took control in the Kivu six months after independence.

Paul was tallish, stocky, charming. He kept his hair clipped so close to his head that he always looked as if he were wearing a black pillbox hat. He had a roundish face, a ready sense of humor and sparkling eyes. When you looked at him, you understood that he was a rascal. Even so, you felt the good-hearted anticipation that fills the air when a comedian is telling jokes.

One of my first mornings in Bukavu Paul entered my office to announce: “Je dois aller à Usumbura pour dire bonjour au pere de ma femme.” He had to go to Usumbura to “say hello” to his father-in-law. I was skeptical. Paul added that his wife’s mother had just passed on. He needed time to attend her funeral. Hmmm.

This request required elaborate decoding. Fortunately the Consul could provide it. Step One: “Dire bonjour.” “Saying hello” was apparently an African custom. Step Two: His wife’s father. That did not seem difficult to understand – until I discovered that by African kinship reckoning this father was not necessarily the wife’s biological parent; he might be any number of men senior to the biological father in the father’s lineage. The same applied to his wife’s mother. Step Three: Why must he go? He was working at the Center. Couldn’t he “dire bonjour” on personal time?

Of course, Paul was testing me. Was I a stickler for discipline? It had grown sloppy in the months that the Center lacked an American officer. The Consul had placed Paul in charge of the center, but he was frequently gone – as he wanted to go now. He would roam around town in the USIS film truck, doing “contact work.” In the evenings the truck was often seen parked outside nightclubs where a man with a vehicle was always a magnet for women.

Yes, I was being tested. But why play martinet? I let Paul go. If he liked to travel, so much the better. If I had any goal in Bukavu, it was to see some country.

When I told the Consul that I had agreed to Paul’s trip, he grumbled at me. Paul’s wife had left him, he explained. She had returned to Usumbura with their four children. Paul’s trip was no doubt an attempt to straighten out this matter with her father; probably he was in arrears on bridewealth payments. Heaven knows, the Consul said, Paul owed money all over town. His landlord had dropped by the Consulate that very morning to complain that Paul had not paid his rent in five months. Did Americans not pay their employees? Another recent visitor was the father of an African girl (again that kinship ambiguity). He claimed that she was expecting Paul’s child. Hmmm. What was to be done about this fellow with “great contacts”?

I started to keep better track of the after-hours use of the film truck. I accompanied Paul when he showed films in the cités. One night we went to Bagira, high in the hills above Bukavu. The film truck’s appearance sent waves of excitement through the dusty streets. Children ran toward us, screaming “See-nay-ma! See-nay-ma!” and “Ay-tazz-oo-nee-dam-air-eeek!” (The legend “Etats-Unis d’Amerique” was painted on the film truck door.) Wild with anticipation, they danced in a frenzy, flinging their hips and flailing their arms, clouds of dust motes rising about them. Paul leaned out of the window to greet them.

When we reached the place, the cité square, Paul started the phonograph blaring cha-cha-chas from his personal collection. He quickly had young men carrying boxes here and there, helping him to set up. Soon women abandoned their cook fires. They tied babies to the smalls of their backs and approached the screen Paul had directed his acolytes to erect. When all was ready, he began the show – with a “Charlot,” a Charlie Chaplin film. Slapstick in the balmy evening. Our African audience loved it.

The Charlot was not in the center’s film collection – Paul had gotten it somewhere – and when USIS Léo learned that we were showing it, I received an instruction that Charlots were not to be exhibited. USIS film shows were designed to inform, I was told, not to entertain. (The instruction was best ignored.) After the Charlot Paul showed several USIS informational films, inducing the audience to stay by promising to end with a second Charlot. While Paul rewound the films, our audience sang and danced. I did a twist, then in vogue in the States, to show that white men could also dance.

Sometimes after a show Paul and I would eat dinner together at the Bodega. We even had serious conversations. When the subject was religion, Paul said that everyone should have one – and should be free to choose the one he wanted. Pre-independence practices at the Bukavu cathedral offended him, he told me. He resented the fact that the heads of black children were shaved prior to baptism, but those of white children were not.

“Le Bon Dieu will punish these priests on Judgment Day,” he said.

“They willfully refrain from marriage.”

“And that’s bad?” I myself have so far refrained from marriage.

Paul shrugged, but stated his conviction. “Marriage is the proper state of man,” he said. “Each man has a duty to augment the world. Le Bon Dieu will punish these priests for their arrogance.”

Paul and I learned how not to get in each other’s way. And he was canny enough to play for the big score. That was travel. There was per diem in that for him – and an even bigger plus. While I wanted to travel to see new country, Paul wanted to travel to meet new women.

So Paul could hardly contain his glee when he learned of the trip to Goma. With an air of great importance he made reservations for us at the luxurious colonial era hostelry, the Hotel des Grands Lacs, shouting into the phone, speaking on behalf of Monsieur l’Attaché du Consulat Américain.

Besides hoping to see animals and new country, I had another reason for visiting Goma. Shortly before going overseas, I had met Murielle, a Belgian girl raised on a plantation at Saké, only a few miles south of Goma. We had assumed any emotional attachment would be fleeting – after all, I was about to depart – but we had fallen in love. There were, however, issues between us: a difference in religion and questions about how children would be raised. These never got resolved; in fact, because the time was so short once we grew serious, they were never even discussed.

We stopped writing during my year-long tour in Brussels. However, the correspondence had recently resumed – with enough interest on both sides so that I felt I should probably dire bonjour to her parents.

We departed for Goma at noon Friday. It rained off and on all day. We left the paved road 35 kilometers out, drove past clusters of banana-frond huts, away from the lake and back beside it, climbed the escarpment. Almost at the top, we stopped to stretch. When we were ready to start again, the battery was dead. Ugh. We rolled the truck backwards and started in compression in reverse. We drove on, up the escarpment and down it. The motor kept cutting out. As long as we were on an incline, we had no problem restarting in compression. But the motor died as we moved along the water’s edge. We got out. We pushed the truck, but could not move it fast enough to restart it. The rain began again. We corralled a passing African, a banana frond over his head as a rain hat. He helped us push, again in vain. A European came along. Using bush ingenuity, we restarted the truck by putting the battery from his Land Rover onto our mount. Once the motor was running, we reinstalled our battery – all while the engine was turning.

We went on. The rain grew heavier. When we stalled again as light was fading from the sky, Paul went to find help. Charley and I waited, wondering if we’d spend the night in the truck.

What was Donanne doing while Fred was serving in the Kivu? After finishing her sophomore year at Principia College in 1962, Donanne flew to Bogota, Colombia, to join her parents. Her father, Don Ralston, was then a member of the State Department’s inspection corps looking at embassies and consulates in Latin Anerica. During that summer she visited Panama, Costa Rica, Nicaragua, Honduras, El Salvador and Mexico. Needless to say, inspectors and their families are always treated well. The summer after her junior year at Principia Donanne stayed with her grandparents in Redlands, California.

Next post: Fred and his pals manage to reach Parc National Albert where they see elephants, baboons, Cape Buffalo and hippos and manage to get stuck fast in mud just as night is falling. Uh-oh.