Before leaving the eastern Congo to set up an American Cultural Center in Coquilhatville deep in the jungles of the northwest, Fred Hunter wanted very much to take a look at animals north of Bukavu. With the American Consul’s encouragement, he hatched a plot. 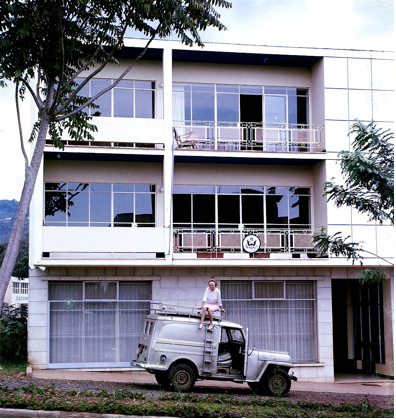 Doubtful that I would ever return to the Rift Valley, Bukavu’s American Consul had an idea. He and his family were taking a weekend trip to Usumbura (now Bujumbura), the capital of neighboring Burundi. They would be gone three days. Charley, the Consulate’s communications man, in whose apartment I lived, would have few duties that weekend.

“Charley needs to get out of town,” the Consul said. Charley had been seeing Chantal, a blonde twenty-one-year-old Belgian girl whose mother, a weaver of spider webs, was trying to find her a husband. The relationship had become passionate – and therefore possibly dangerous for our young American. “Why don’t you take the film truck to Goma?” the Consul suggested with a grin. “I’d like to know how that road is, but I sure don’t want to test it myself.”

Goma lay at the north end of Lake Kivu. From there we could dash up to Parc National Albert, the Congo’s premier game reserve, teeming with wildlife: elephants, hippos, lions. Few tourists had visited the park since independence. “You’d have the place to yourselves,” the Consul said.

That night I found Charley in the Bodega restaurant, sitting alone at a table. He was deeply pissed off. Chantal, who was supposed to meet him, had stood him up. Since he was on his third beer, drowsiness had begun to dissipate his anger.

“Maybe it’s for the best,” I suggested when he told me what was wrong. “Easier to escape the spider’s web.”

“Why don’t we go up to Goma this weekend?” I suggested. I laid out the plan for him.

“Bitch,” Charley grumbled. It was all he said. We ordered dinner.

Soon Chantal entered the Bodega. She joined us without being invited and sat beside Charley. “I’m mad at you,” he snarled. The beer-induced drowsiness had disappeared.

“I thought we were meeting at the Cercle Sportif,” Chantal pleaded. She rubbed her breast against his arm.

“Get lost,” Charley said. “I’ll see ya sometime.” Chantal brushed his hair away from his forehead and smiled. “Who brought you up here?” Charley asked. “Some guy?”

Then, as if on cue, Mme DeTree came into the restaurant to fetch Chantal. When she saw Charley, she mock-scolded him. “You Americans! You expect Chantal to hunt all over town for you?” Madame sashayed over and stood behind Charley, her hands on his shoulders. He was undeniably good-looking, black Irish, with the innocent American openness that baffled Europeans.

Mama DeTree possessed a roguish charm. She pretended to be an artist, while her husband, a bland bucket of incompetence, spent his time drinking at the sports club. In her studio she displayed nude studies of a succulent Chantal; any observant man knew what was on offer there. But was Mama DeTree consciously weaving a web? I doubted that. She was shrewd enough to see that even in the present uncertain times the blonde, buxom, compliant and rather pretty Chantal could do better than an American with that guilelessness Europeans mocked and distrusted. She just wanted her daughter to have some fun.

When our dinners arrived, Chantal nibbled off Charley’s plate. He fed her a bite or two with his fork. She smiled at him. He moved his jaw around, trying to suppress the answering smile that was on his lips. “I guess I’ve got to take you home, don’t I?” Charley said. He looked at me. “Can I borrow the film truck?”

Mama DeTree departed as I gave him the keys.

After a moment he told Chantal, “I can’t see you this weekend. We’re going to Goma.” He looked at me. “Paul has to go with us,” he said. “I’m not going on that road without Paul.”

Next post: The Congolese local employee Paul Wemboyendja is deeeelighted to take a trip to Goma (“Quelles filles!“) and Parc Albert.