As we flew in the World War II cargo plane, painted white to mark it as belonging to the United Nations, the land below was a huge, thick carpet of green, the Congo basin. Steam seemed to rise from it. But we were cold in the fuselage, belted into bucket seats lining the sides of the plane. Strapped to the floor was a cargo of medicines, gasoline and US-supplied powdered milk.

We were going from Bukavu on the Congo’s eastern frontier to jungle-bound Shabunda, 350 kilometers west, halfway to the river port of Kindu on the Lualaba or Upper Congo River. In those days the UN kept the country running. Of the five of us passengers the most important one was a former Argentine diplomat fulfilling his last duty as head of the Kivu’s UN delegation to distribute the relief supplies and food aid that were our cargo. We had two Congolese passengers: Monsieur le Président of Kivu Central Province and his deputy Monsieur le Vice-Président, both wanting to be associated with the arrival of relief aid. The two remaining were the US Consulate’s CIA officer, publicly called the Vice-Consul, and me, temporarily assigned as the director of its Cultural Center.

The plane saluted Shabunda by circling twice over the town, alerting the populace that we were arriving. Descending, we watched figures racing from every direction toward the airstrip. We moved out of the chill of altitude and felt the heat of the jungle absorb us. The plane settled onto the spongy grass runway cut out of thick jungle vegetation not far from the town center. By the time we debarked silent, curious faces lined the stake fence at the runway’s edge. Boys and young men scrambled into trees to watch us. Fifteen bodies sheltered in one of them, peering at us until we left an hour later.

The Argentine UN man spoke briefly in French. He shook hands with the crowd of local bigwigs who clustered close to shine in the reflection of his glory. Monsieur le Président and Monsieur le Vice-Président politicked in Swahili. At the edges of the crowd hordes of boys and young men crept forward to listen. No women in the crowds, just young men and boys. A policeman would shush them away. When they did not obey him, he scooped small stones up off the gravel pathway to throw at them.

Then the Vice-Consul and I saw a woman pushing her way forward. She was white. Obviously a misfit. And undeniably American. Perhaps the daughter of the farm couple in Grant Wood’s “American Gothic.” A tallish, thin woman with a work-worn, breastless figure. Breathing heavily, she smelled as if she’d run a long way. Her cheeks hung straight from the edges of her colorless eyes. Her mouth was thin, just a line across her face. A little stake fence of wrinkles ran above the bridge of her nose. Her hair dropped down in a knot that had come undone. Her dress hung on her the way it might have hung on a hanger.

Emboldened by the recognition of her fellow countrymen, she came toward us. “I’m Miss Helen Hoffman,” she introduced herself. She smiled with a coyness decades out of practice. “An old maid missionary,” she added. Coquettishness seemed the only way she had ever known to talk with men of her own kind. “I ran a mile to get here. Came as soon as I saw the white plane circling.” She looked down as if embarrassed. I saw that her bare feet in sandals were as splayed as the feet of a duck. “I’ve been here 35 years,” she said. “Since 1928. I’m with the Evangelical Bible Society of Pittsburgh, Pennsylvania. I’m particularly partial to spiritual work.”

We asked if she had been back home in all that time.

“Only twice,” she said. “Wouldn’t leave at Independence. Even when it seemed like Armageddon. I had a household full of orphans. I preferred to die for them than leave.” 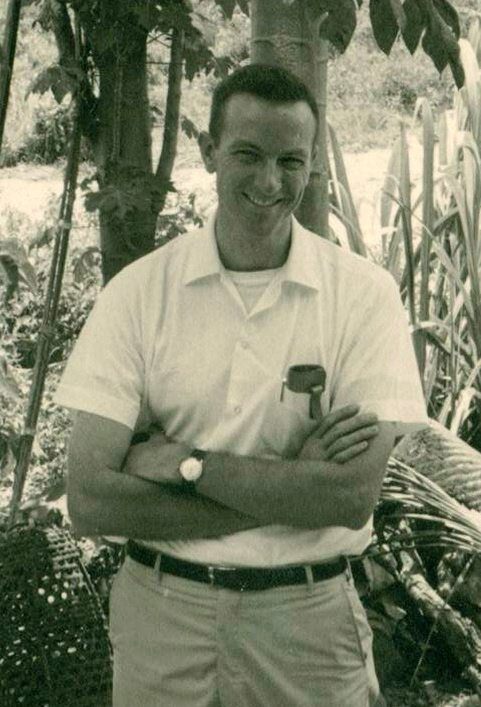 The relief supplies had been off-loaded. We were called back to the plane.

“Before you go, I must introduce you to two of my prizes,” Miss Hoffman said. She ran to two men nearing middle age and pulled them toward us. One was the chef du district, the other a doctor. They shook our hands, willing to act as evidence that she truly had accomplished great things in spiritual work. They treated her with affectionate respect – although she clearly struck them as odd, a sexless creature in a society that judges women by their procreative capacity.

When I shook her hand, she once again murmured, “Just an old maid.” I smiled, a little embarrassed. She held my hand a moment, still Flapper Era girlish in the presence of a man. She was a jungle Rip Van Winkle; she had spent her life in the waking sleep of the deep bush, in that isolation chamber where every week was the same, where the daily routine of life and the annual passage of seasons never changed. It was as if she had been sleeping all those years in the eye of a storm that had never shaken her awake. Our dropping out of the sky was a mere stirring of her sleep.

As I loosened my hand from hers, I hoped that she loved the Congolese, that her service had fulfilled her. I hoped that the donation of her life to these people had satisfied a longing for purpose.

We took off from Shabunda. The last figure I saw was that of Miss Helen Hoffman. She was loping at the edge of the runway, waving. I thought of her all the way back to Bukavu.

What was Donanne doing while Fred was serving in the Kivu? After finishing her sophomore year at Principia College in 1962, Donanne flew to Bogota, Colombia, to join her parents. Her father, Don Ralston, was then a member of the State Department’s inspection corps looking at embassies and consulates in Latin America. During that summer she visited Panama, Costa Rica, Nicaragua, Honduras, El Salvador and Mexico. Needless to say, inspectors and their families are always treated well. The summer after her junior year at Principia Donanne stayed with her grandparents in Redlands, California.

Next post: Fred gets a taste of the Equateur, the region of which Coquilhatville is the hub.