When Fred Hunter arrived in the Congo as a young US Information Service officer, transferring from a training post in Brussels, Belgium, he was sent first to Bukavu, then was told he must go to the northwest to open a cultural center in Coquilhatville. Before leaving the Kivu, he wanted to visit the parents of a young Belgian woman he had dated in Washington, DC. 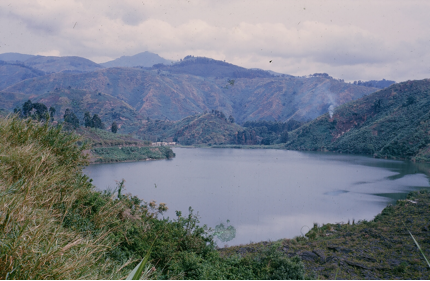 Saké near the DeMunck plantation

Late in the afternoon while the others relaxed in Goma, I drove out to Saké, hoping to find the De Muncks’ plantation and, if I was lucky, to meet them. I passed the lava flow of Nyiragongo’s most recent eruption. I drove down the only turn-off I could find. I passed mud-and-wattle huts, asked directions of Congolese, received conflicting advice and persevered. I came upon a locked gate. There I left the film truck. I climbed around the gate and walked to a plantation house constructed of lava blocks and set on a tall headland overlooking Lake Kivu. It and the view were something out of movie versions of paradise. South Pacific’s Emile de Becque had a home like this and sang songs all day. How lucky the De Muncks were to live here! But no one was around. I circled the house, wanting to verify that it was, indeed, the place where Murielle grew up. I left a note.

Returning to the gate, I found a couple staring at the film truck. He wore khaki trousers and a shirt/jacket, belted, with pockets at the breast and below the belt. She looked very much like Murielle. I introduced myself, explaining that I was an American friend of their daughter, now living in Bukavu. I had no sense that either of them had ever heard of me. But why would Murielle have told them anything? What I did sense was that they were both enormously tired.

They invited me into the house. I felt uncomfortable at first, very aware that I was defying one of the litanies of my upbringing (“Never intrude!”) and conscious of the inadequacies of my French. But soon it was clear that the De Muncks saw me as a pair of virgin ears; they could tell me things that other people they talked to had grown tired of hearing. Moreover, as an American officer, I represented that irresistible force, American policy, which they held responsible for much of the calamity that had befallen them. We had tea and a light supper.

Independence and its aftermath had turned their lives upside down, they said. Eighty percent of the workers on their coffee and tea plantations were Tutsis, originally from Rwanda, though they had lived in Congolese territory for generations. Now members of the Congolese government were threatening to force all Tutsis back into Rwanda. When the De Muncks had talked to North Kivu’s provincial president – it clearly irked Madame to address him as “Monsieur le Ministre” – he had told them that if they supported the Tutsi work force, then they were “contre” the local government. “What can one do?” Madame asked.

She complained that local bandits were hired as police. These hoodlums terrorized the countryside, slitting the throats of plantation workers and beating pregnant women. I remembered Murielle telling me about plantation workers who had found the decapitated heads of fellow workers placed along footpaths. “We sent the children outside the country,” Madame said, “so they would be safe.”

“We did not want them to see these things,” Monsieur said.

“The children are safe,” Madame continued, “but we have nothing to send them.”

Monsieur explained that he had plowed all his money back into the plantation. He had put nothing away against a rainy day. “And why should I?” he asked. “In those days a Congolese franc was worth the same as a Belgian franc.” Now the Congolese franc was worthless; things kept breaking down; it was impossible to get spare parts and on a whim the government commandeered trucks.

Of course, they acknowledged, Belgium had lacked courage. To abandon the Congo in the manner it had! The Portuguese in Angola were right to hold on. And the Americans! Wasn’t it clear that they intended to exploit the Congo’s riches?

I listened as they let off steam. “Mais vous ne dites rien!” Madame kept saying. “You aren’t saying anything!” But what was there to say?

At dinner I asked about Madame’s photography; Murielle had told me about it. “There is no time anymore,” she said. She caressed the dog with affection and conversed with the parrot. Monsieur chuckled now and then; I liked him for that. After dinner Madame showed me a collection of her photos printed as postcards. She stood behind me as I sat thumbing through them; reminiscence warmed her voice.

When I said goodbye, they invited me to return. “Come spend a week,” they suggested. “Climb our volcanoes. Or perhaps we could all go to Uganda. We know a place in Elizabeth Park; it’s not usually open to tourists.”

Driving back to Goma, I realized that I had not asked to see photos of Murielle as a child. I wondered if I would see them again. I never did.

The next afternoon Charley drove us home – all too quickly. Paul’s night of passion had left him tired and speechless. His friend had so extracted the juices from him that halfway down the lake he insisted we stop at a plantation house. He ordered an African there to fetch him a glass of water. Charley was equally silent, thinking probably about the heifer he had seen at Vitshumbi and the one awaiting him in Bukavu. I mulled over my visit with the De Muncks. I wondered what would happen to them and to Murielle and if I would have a part in any of it.

We stayed in second gear until well within sight of Bukavu. The streets were deserted. A rumor had spread that the Mwami of Kabare, a local king, might stir up trouble, perhaps even send warriors to invade the town. Where usually the night was full of cha-cha rhythms from Congolese bars, this night there was only silence.

Parts One through Five can be viewed in the Archive located at the top of the Home Page.

Next post: On a flight to a bush town deep in the Congo jungle, Fred meets a modern-day Rip Van Winkle.

Want to meet the Mwami of Kabare? Want to see how he and Paul Wemboyendja interact? Take a look at “Waiting for the Mwami” in Fred’s AFRICA, AFRICA! Fifteen Stories. Check it out at www.Cune.com/Africa.