Fred Hunter went alone to establish an American Cultural Center in the northwest Congo’s Equateur Province. Here’s how it was:

Some say that entering the Equateur is like traveling back to the beginnings of time.

Driving into it you see little: only the track before you, the rutted, orange-colored road rising and falling, descending to a watercourse bridged by logs and rising again to the top of the next low ridge. Beside you flashes the jungle. It grows thick and dark and does not entice you. Above is the sky, brilliantly blue. It winds like a river through the leafy overhang of trees. And you go up and down, up and down on the orange laterite road.

When you fly into the Equateur, the land spreads below you with unrelieved flatness. It extends beyond the range of your eyes, beyond the haze lying across it in the dry season, beyond the reaches of binoculars during the rains when the air itself is as clear as a lens. It stretches to the Atlantic; it reaches to the backbone of Africa: the Rift Valley Escarpment and the Mountains of the Moon. Below lies the jungle, a green sponge of vegetation surging outward. It lies dense and endless over a space whose walls are the sky. Looking down you may spot a mud pond fringed by trampled grasses where elephants dance and bathe in the evenings. Or a river. Or an occasional plantation or mission, perhaps a cluster of huts. Generally, though, you see only the greenness of vegetation.

Plantations untangle and order this verdure; they do not interrupt it. From the air you suddenly notice that the patternless intertwine of plant life has given away to textured design, to rubber trees or oil palms set out and tended in neat rows. A referee has stopped the struggle among the trees for space. Along one edge of the textured design plantation buildings hug the river’s edge; corrugated roofs glint in the sun. The pattern of trees continues; then abruptly it ends. The chaos of jungle resumes.

Missions disappear even more quickly. A Protestant station is nothing more than a clearing and some buildings: a church, a school, a hospital, a home for the evangelist, and one for the doctor. A Catholic station usually has a cathedral in the Italian style and priests in white soutanes moving slowly across its lawns. But before you can think it incongruously ordered, the raw tangle of jungle has returned.

Villages line the roadways, eight or ten huts to a side. They stand at the regular intervals where colonial administrators of yesteryear resettled their residents to provide a maintenance force. They cluster close to plantations, too, and to missions and trading towns. And they cling to the shorelines of rivers and swamps where the fishing is good.

Only rivers interrupt the jungle. From the air they have the appearance – and much of the mystery – of snakes. A jungle river is a silt-covered living force; it twists through primeval growth and sleeps in the sun. 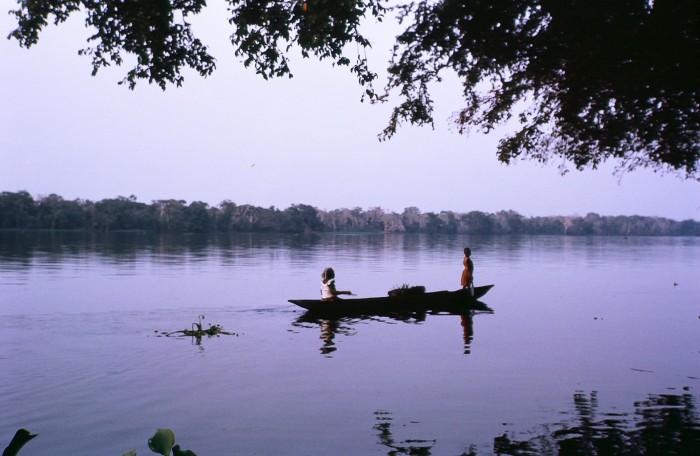 In the Equateur the greatest of these river-serpents is the Congo. It is a broad flat boa with an island-dotted hide, curling out of Africa’s heart. It travels north from the Katanga highlands, turns west sliding over the rapids at Kisangani and at Mbandaka is moving south. Running broad and flecked with islands, its waters seep back into swamps. It swallows the Ruki; it absorbs the Ubangi and Kasai, sweeps past Kinshasa, plunges through a gorge and surges into the Atlantic. It meets the ocean with such force that it discolors the water for miles out into the sea.

For the Equateur the river is the central fact of life.

Sailing into the region you realize this. Going by sternwheeler the passage from Kinshasa takes four-and-a-half days. During that time you are part of the river. Watching the shoreline you feel that nature has held itself unchanged for centuries. You pass fishing villages, some of them abandoned. Beached pirogues mark the inhabited ones. Men weaving nets wave to the boat. You slip by short rises of ground where the trees thrust upward, yearning toward the sky. Profusions of lianas hang from their branches. You see the shoreless expanses of swamp: grass simply growing into the river. Soon the variations lose significance. You realize that only the constants have meaning: the sky, the water, the land.

Your white sternwheeler is pushing several motored barges. You climb forward to observe them. Having built squatters villages on them out of mats, the steerage passengers are loving the breeze and the leisure, the change from daily routine. Gaiety enlivens their movements. Cha-cha music fills the air. Nursing and bathing their infants, the women laugh and yak; their inflections are like a song. Men crowd the rails to bargain for food from fishermen who have pulled out to the paddlewheeler and lashed their pirogues alongside.

The hours pass. You return to the deck outside your cabin to read. The sun is hot. It glares off the river and has already reddened your skin. You are reading Joseph Conrad: “Heart of Darkness.” The story is slow, the sentences as tangled as the jungle’s vegetation. You put the book down. You watch the sky, the water, the land. You understand what is really here: space without time. And silence. Silence. A great silence hangs over the river.

At night you hear it. You stand on the deck in darkness. The stars seem within reach. The air has at last turned cool. The water whispers below, sliding away from the boat. Do you see the shoreline or only imagine it? You cannot tell. Then you hear the silence. It is vast and heavy; it presses down on the Equateur.

The next day you try to read again. But again the sun is hot. You do not wait so long to close your book. You watch the sky, the water, the land, and now and then you doze. You begin to understand Africa’s sense of time.

What was Donanne doing at this time? In the autumn of 1963 she began her senior year at Principia College, taking a four-month Prin Abroad study trip to Europe, visiting Greece, Italy, France and Britain.

Next post: Fred gets to know some of the “Coquins” of Coquilhatville and learns about the post-independence problems they face.

TRAVELS IN AFRICA: CONGO, Settling into Coq, Part One