TRAVELS IN AFRICA: CONGO, Settling into Coq, Part One

Fred Hunter’s first months in Coquilhatville were dicey. But very gradually things got better. His account:

Coquilhatville, capital of the remote Belgian colonial province of the Equateur, was a river port located where the great Congo River crossed the Equator. Named after a Belgian explorer-administrator, it was not an inconsiderable place by bush standards. Even so, it struck me as a tiny toehold of civilization at the edge of jungle. At the time American policy was to thwart Communist penetration of central Africa. One means of doing that was to extend the American presence in the Congo. The Cultural Center I would open was one implementation of that. I was – God help us! – the official American presence in the Equateur. 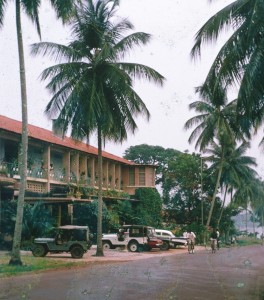 The USIS branch post coordinator had rented an abandoned house near the town center to serve as the Cultural Center building. I was supposed to live there, ugh! Fortunately, the American UN man who fetched me at the airport drove me past the house and then out to the Ancion Hotel; he invited me to bunk in his room. A Congolese girl in her early teens was idling at the reception, ready to be of service. When the American UN man quit Coq a few days later, I took over his room. In the photo, it’s the curved room jutting out at the far end of the building.

There was no place to eat in the hotel. The Oasis, the town’s only restaurant, was near the center building. Small tables filled its dining room – at least that’s how I remember it – and I ate there, always by myself, lunch and dinner every day but Sunday when it was closed. Since I carried my upbringing with me, I did not drink. So it did not occur to me to hang around the Oasis bar, playing dice or darts. I got rolls and coffee for breakfast at a bakery. The walk from hotel to Oasis, possibly half a mile, gave me exercise.

I spent my first weeks awaiting the arrival of supplies from Léopoldville, the Congo’s capital. I made some contacts, introducing myself, hanging around the UN Club a bit, and looked in vain for a place to live. I did begin slowly to become acquainted with some of the townspeople. A few, though not many, were Congolese. Fellow Americans from the Disciples of Christ Congo Mission (DCCM) befriended me and I was immensely grateful, particularly to Ron Sallade, the mission’s young treasurer from Des Moines, for their supplying me with boiled water and feeding me on Sundays when the Oasis Restaurant was closed.

I had been writing a play about two people living clandestinely in one of the history rooms at New York’s Metropolitan Museum, and I worked on it. I wrote long letters. These were two ways of removing myself from Coquilhatville.

I seemed unable to connect with members of the UN contingent. In fact, I never got to know any of them well. A good number of former Belgian colons remained in Coq, but they were clannish. They referred to themselves with pride as “coquins,” a French expression for “rascal.” Most of them were suspicious of what the Americans were really up to in establishing a presence in Coq. It was no secret that American policy was obsessed with thwarting Communist penetration of central Africa. It was a time when the gloved hand of the CIA was suspected everywhere and, laughable as it seemed to me, Belgians did assume that my role was not truly to dispense information, but to gather it. Maybe this was why no one ever invited me into the Oasis Bar. 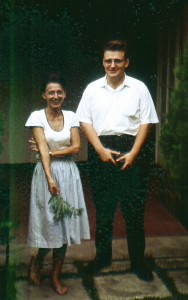 M. and Mme. André, however, were two Belgians willing to accept me for what I seemed to be, a rather confused American trying to get established. Mme. André especially was hospitable to non-Belgians; she seemed interested in knowing people who came from different backgrounds. M. André, the town’s only electrician, was less forthcoming. In his early- to mid-thirties, short and wiry, he had been in the Congo for a dozen years. Once he’d established himself, he returned to Namur, his home town, to find a wife and found a good one. She had dark, flashing eyes and a ready ironic sense of humor. Like other single men in the town, I rather fell for her, found her attractive, womanly and caring, a truly good woman who would never be less than that.

André had stayed in Coq throughout the independence period although he had sent his wife and four children back to Belgium to keep them out of danger. André had an idealistic sense of what he was trying to achieve in the Congo and of the potentialities of “ce petit coin du pays” (this little corner). Maybe that was partly why he’d stayed after independence was declared and some of the first of “les troubles” happened in Coq. That and, of course, his desire not to lose everything he’d put into the town. In some ways the Andrés rescued me from isolation. Even so, for months we observed the politesse of French usage and referred to one another always as Madame and Monsieur. I was Monsieur Oontaire. It took me a long time to become Fret.

André was an enormous help to me in transforming the house the USIS branch post coordinator had rented from Mâitre Herman, the local attorney, into a workable physical plant. It was he who had shown me how to convert two bedrooms on the south side of the house into a theater for film shows (his men knocked out a non-structural wall) and build a projection booth outside that showed films through a window. We also climbed up above the center’s ceiling one day – hot up there and rat-infested – to see what the space offered.

Mme André invited me to dinner on several occasions. Once I was a guest of hers with Ron Sallade who spoke no French. Her hospitality was tangible even to those who did not speak her language. She played Edith Piaf songs on a tape recorder and sang along with the Sparrow. It was the first time I heard “Milord.”

André introduced me to the firm of Delinte & Boudart, local builders whose men actually constructed the small theater. The partners worked six-month stints in Coq. Boudart returned just a bit before Christmas and Delinte soon departed. Boudart was probably ten years older than André, considered himself to have a much more realistic approach to surviving the ups and downs of the post-independence Congo and spoke a gravelly, guttural Belgian French that I often had trouble understanding. The contrast between André and Boudart would fascinate me for months.

Next post: Early days in Coq: some apercus from letters.