Fred Hunter’s first months in Coquilhatville were dicey. Gradually things got better. Then they got worse – for some.

Something happened just before Christmas that tested the ex-colon merchants. The Léopoldville government devalued the Congolese franc. Suddenly soldiers and police appeared outside all the stores in town. Then they entered the stores and searched them to detect any hidden goods the merchants were holding off the market, ostensibly either to sell later at higher prices or to sell on the black market. The mastermind of the searches was the local interior minister Gaston LeBaud, pronounced LeBeau, “qui est le contraire de son nom,” as Mme André with her ironic sense of humor observed. I was not involved in this business. In fact, it was never entirely clear to me what was going on. Some of the Belgians referred to it as “le pillage.” It seemed entirely possible that police were simply plundering some of the merchants’ stores and demanding fines without any sort of judicial procedure. The stores were closed for a week. 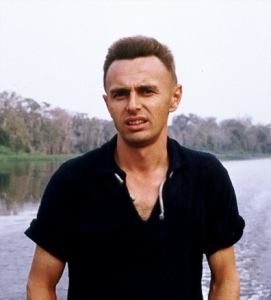 André came to see me late one afternoon. We sat in the office of the center with late afternoon sunlight slanting into the room. I had never seen him drink heavily, but now I could smell liquor on his breath. I was still living at the Ancion Hotel overlooking the river and he knew I’d had trouble finding a place to live. He suggested that I rent the André home.

“It would be perfect for you. It’s in the center of town. On the main square.”

“I will continue to work there. The office and the work area and all my stores are right there.”

“But where will your family live? You’ve got four children.”

Obviously the liquor had fortified him to make this offer. He explained that he had charge of a house out by the river, a bit north of town, that actually had more room than their present house. He was taking care of it for a friend who had left the country. In fact, he said, months ago he had talked with Hank Clifford (as I shall call him) about the center’s renting the André house for its office. “It would have been much better than Herman’s house.” I nodded in agreement. But Hank had wanted a decision before the Andrés had hardly been able to discuss the matter and so he had gone with Herman.

I didn’t know what to say. I very much wanted to leave the hotel, to stop living out of a suitcase. And I understood, of course, that the American Embassy would pay hard currency for the rental and that that would be of real benefit to the Andrés. But I would be forcing the children out of the only home they knew in the Congo.

“We have decided to leave the Congo,” André said. I could hardly believe his words. Madame and the children had only been back a year. Everyone had thought things were getting better, that Coq had hit bottom and was coming back. “This is not a place to raise children,” André said. “This is not a place to do business. My children watch police come onto our property, demand to search our stores.” He stared at the floor, hardly able to speak so deep was his anger at the African pillagers and at his own impotence to counter. “They held a gun to my head,” he said. “They demanded that I write a check for CF 200,000. Made out not to the government, but to a member of the so-called ‘comité de vigilance.’ It went right into his pocket. It was robbery.”

I nodded, stunned by the courage and the despair that lay behind the decision to start over. With a wife and four children.

“This is not a place to bring up children,” he said again. “In un petit an we’ll be gone.”

I said I would be grateful to live in the house. It held pleasant memories for me. I would be glad to have him working every day in the office attached to the house. Maybe I should take a look at it.

When I went to the house, tiny Martine, maybe six years old, showed me her bedroom with innocence and delight. She had no idea that she would be leaving it. Once again I said that I would be grateful to live there. I’d have to make arrangements with the embassy.

As it turned out, André had suddenly to fly to Belgium. His father was dying. He was gone three weeks.

I moved into the house shortly after he returned. And so the year 1963 ended for me.

What was Donanne doing at this time? She returned to the United States from the Prin Abroad trip to Europe and spent Christmas with family in Redlands, California.

Next post: Fred meets a true “coquin” and gets a different perspective on how to deal with the Congolese.