As Fred Hunter labored to open an American Cultural Center in Coquilhatville, government-directed searches and fining of merchants shattered the town’s tranquility. The aftermath reverberated for weeks.

As building projects at the center engaged particularly the electrician André and the contractor Boudart, I gradually gained access to their social circle. Mme André often presided over dinners of expatriates. These usually included Boudart and the Polish UN doctor Janusz Michejda and his wife Barbara. Madame even hosted a dinner when her husband was called away to Belgium to visit his dying father.

From a letter in mid-February:

Thursday evening a moambe chez Boudart. Other guests included the Andrés (he’s back now from 3 weeks in Belgium), the Michejdas and a M. Guillaume, the regional secretary of an organization of Congo and Belgian business firms. The moambe (chicken, rice, manioc greens, palm nut sauce, all garnished with HOT pili-pili sauce) was very good and on leaving Boudart asked me to finish it off with him yesterday at lunch. Which I did.

Thursday evening after dinner we sat around a kidney-shaped coffee table and talked late into the night as the table became more and more weighted with coffee cups, water, liquor and fruit juice glasses, an orange juice maker and ash trays burdened with cigarette butts. Boudart and Michejda are great talkers. All one has to do is sit back and ask the proper questions. Off they go. Boudart put on some 45s of music popular last year in Belgium and Mme André would lean back and occasionally sing.

M. André is having a particularly bad time of it just now, what with his father’s death, being fined at gunpoint and deciding to leave Coq. The contrast between him and Boudart couldn’t be more pronounced. André’s nervous, restless, yet unable to focus his energies. He’s idealistic to a fault, and the realities of Congolese life now (the disintegration, the lack of law and order, the exploitation) are making it more and more impossible for him to stay here. Something is eating away inside the man, and it’s difficult for his friends and acquaintances to watch. After he and his wife left the other night (around 10:30 which was quite early for a bunch that chatted non-stop till 12:30) Michejda and Guillaume commented on André. Michejda mentioned his forthrightness, his honesty, his inability to act in any manner except the direct one. 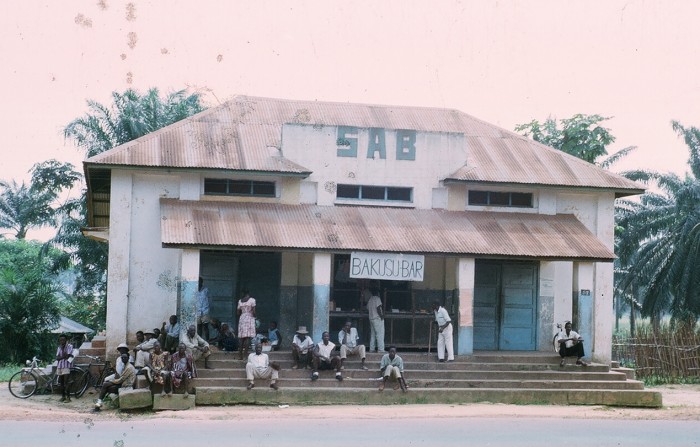 Boudart and I talked about André after lunch yesterday. Boudart feels that this is no longer a country where one can act directly. He’s basically too kind (in a rather tough, cruel way) to scorn André for his failure to adapt to the now-reality of Congo living, but feels that direct action is something one can indulge only from a position of power which Belgian colons no longer possess.

I find myself trying to understand all this from a privileged position. I suspect André has not told even these, his closest friends remaining in Coq, that he has made up his mind to pull out. They think he’s suffering only from the strain on his bruised idealism whereas I know that he’s facing the worries of how to extricate himself and his investment, where and how to start over again, wondering probably if he can start again. The people who came down here and carved something out of nothing worked HARD. Is he going to do it again? Most people here seem to feel that his investment in the place chains him to Coq. But I know he’s decided it doesn’t. I think André has a bourgeois mind, not that there’s anything wrong with that in itself, but it’s not the sort of thing that goes here anymore.

Boudart’s a contrast. In reference to a Clark Gable Western shown at the UN Club, he said that was the sort of life he had always wanted to live. To be where a man was truly free, surviving as a result of his mind and his muscle. Ah, the times of the bandits and the sheriffs! I asked him which he would have chosen to be. He said it was a relevant question, but he never answered it. I suspect Boudart would have been a bandit.

It takes a bit of explaining Boudart’s racial theories to demonstrate how he approaches trying to get along now. He explained them at lunch yesterday in terms of geometry. Axiom 1: There is a difference between the Congolese and the European. Therefore, Axiom 2: One must be stronger than the other. And, therefore, Axiom 3: One must be more intelligent than the other. Boudart considers himself more intelligent because he’s been to school, has learned how to think and knows some basic psychology.

Before independence he was stronger because the country was being ruled by whites by white law (if not necessarily for whites). Now he considers himself less strong than the Congolese who is running his own government with enough disregard of white law to render the law of no protection to a white man. Thus, feels Boudart, the question is: Can I be stronger in my weakness through the use of my intelligence than the Congolese is strong through the use of his strength? This is how Boudart approaches getting along now in the Congo. When the Belgians had both strength and intelligence over the Congolese, it was possible to be direct, idealistic, moral. Now that’s indulgence. So says Boudart.

Next post: Boudart’s account of how he handled Congolese officials when they tried to search his store of goods.