On Christmas Eve day I borrowed a truck from the DCCM Mission, hired four Africans, drove to the Otraco warehouses on the docks and picked up the American Cultural Center’s office supplies. For two months they had been chugging up the Congo River from Léopoldville and I had been waiting for them. Now we got them into the center.

All day I worked hard with Tata Edouard, the sentinel or watchman who lived behind the center. He was a series of interlocking circles: his nearly bald head, his eyes behind the round glasses, the cheeks that smiled shyly when we greeted one another, the two globes of his buttocks, his stomach hanging over the waistband of his trousers. Tata was a term of respect for a man of years. But I had no real sense of Tata Edouard’s age. He was certainly 40, perhaps 60. His hair was gray. His unhurried pace seemed to connote a serenity that comes with age.

Whatever his age, Tata Edouard still possessed sexual vigor. He and his wife had filled the two-room stucco house in which they lived at the rear of the property with small children. These children ran about the yard, wearing mostly nothing except thongs tied with charms.

At first Edouard’s unhurried pace had disconcerted me. The first time I brought mail from the post office, he and two naked children hurried to the door of my office. Without self-consciousness, they silently watched me open the mail. Just stood there. I was very disconcerted. But I exerted on myself iron control. “You will not break,” I kept assuring myself. “You will not shout. You will not tell this old man to LEAVE ME THE HELL ALONE!!!” And I didn’t.

On this Christmas Eve day the Tata and I had muscled desks, chairs and books into the building. I had a sense of having worked well and a desire to share that sense with someone. 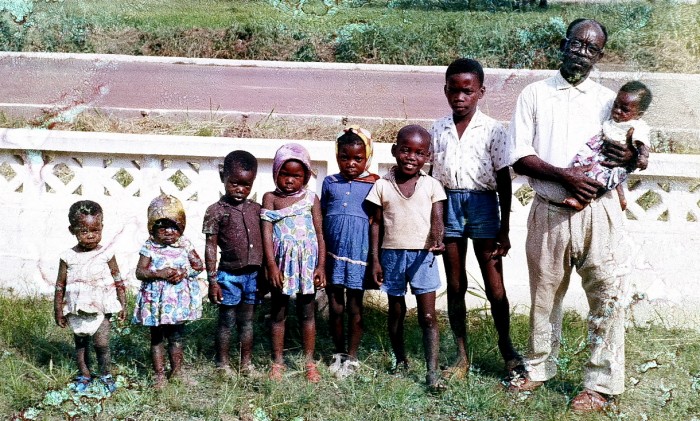 Edouard and his children

But there was no one. Ron Sallade, the town’s other single young American, had gone to Bosobele Station. The Andrés sought the solace of the bush, Madame explaining that they had to get away from the hubbub of Coq. Hubbub, I thought. This slow place? But nothing of mine had been “pillaged.”

Now Tata Edouard stuck his head into the office. He entered slowly with a stalk of yellow bananas and laid it on my desk. “Bon Noel, patron,” he said.

“Tiens, Edouard!” I replied, rising. “C’est vraiment Noel!” Good heavens! I thought. A present. “Je vous remercie beaucoup!” I had not thought of presents. I realized I must give Edouard something. But what?

Then I remembered the four precious bars of chocolate. As I was leaving the Ancion Hotel that morning a Belgian fellow-lodger confided excitedly, “There’s chocolate at Sedec. It’s available only once or twice a year. So hurry.”

I hurried. I had not missed chocolate, but if it came into town only once or twice a year…

At Sedec I found a jostling crowd of colons’ wives, fighting for space at the cashier’s counter. They flirted shamelessly with the Congolese cashier and elbowed me roughly when I joined their queue.  This atmosphere gave the quest for chocolate an aura of great importance. By the time I left the store, clutching my ration, four small bars, I sensed that chocolate had an abstract value of its own. For all I knew, currencies were quoted in it. Eventually at the center I placed them in the pencil tray of the new desk.

Edouard watched me expectantly, ready to receive. In French I said, “C’est Noel! And I have something for you, Edouard.  And for your children!” He brightened. I took the chocolate bars from the desk. “Voila! Bon Noel!”

Edouard stared at the chocolate bars, so small beside the bulk and number of bananas, so few for all those children. I suddenly realized that, of course, money would have been more welcome.

Finally he smiled, thoroughly perplexed. He put the gift into his trouser pocket. “Merci, patron,” he said. He shuffled slowly from the office. 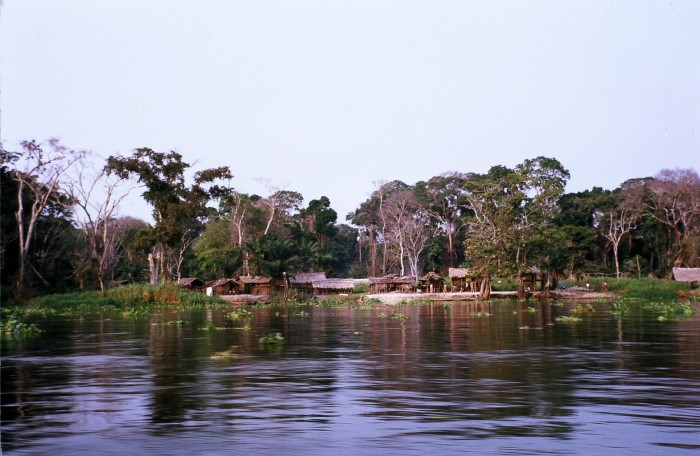 Troubling news came at the end of January. I wrote these notes to myself:

At the end of last week press and radio reported the murder of three Catholic (Flemish) priests in Kwilu province, east of Leopoldville. After burying the priests a “dizaine” of nuns made their way to safety in Kikwit, provincial capital. Two groups of American missionaries were helicopter-rescued by the UN from the same part of the province – after their mission stations had been burned. Ron Sallade told me yesterday that the death toll in Kwilu is said to have reached eight or nine, all Catholic missionaries, a possible exception being one Protestant. He says a number of Protestant missionary stations have been evacuated.

Trouble seems to have a political base. A Gizenga lieutenant named Mulele, I believe, has been terrorizing the area as a means of bringing some kind of leverage against provincial regimes. It’s difficult to understand this taking an anti-missionary outlet, but perhaps the Catholics are still associated (in the Gizengist mind) with the Belgian colonial rule and the Americans with the present regime of GOC.

Reports also come that Europeans have been killed in the last day or two at Lisala, just a day and a half or two days’ boat-travel up the river from us. Some dissident group has taken control of the airport radio tower, Lisala’s only outside communication link, and no news is coming from the town.

Killings in Lisala strike much closer to our own feelings of security than do those in Kwilu. I presume that problems in Lisala have a tribal base since the Budja and Ngombe tribes have carried on a long rivalry within Moyen Congo province since its creation.

Ron and I drove out to the airport (just for a drive) and he told me about the Lisala business. He felt Europeans here have to rely on the good will of their African contacts since the police are incapable of offering protection. We both wondered what will happen when the UN troops pull out of this place as they’re scheduled to do in March.

Next post: More bad news about unrest in the country.