Fred Hunter was evacuated from his post as a USIS officer at the American Cultural Center in the northwest Congo at the orders of the senior officer Tom Madison. Fred felt the evacuation was precipitate and jeopardized the investment he and the US had made in the town. He agitated to return. His account:

On Tuesday morning I concentrate on getting the Wednesday evening plane out to Europe – although I still feel we should return to Coq. I accompany Charlotte Loris, the USIS admin officer, to the APO to pick up mail. I have the feeling that Charlotte – who has always seemed so loyal – is casting off her moorings to me. Suddenly I realize that criticism of Tom’s decision to evacuate can attach itself to me. (“Well, Hunter was there; surely they must have talked this over.” Or: “Why didn’t he stay then if he thought the evacuation was premature?”)

I also begin to understand that in a bureaucracy success and survival are achieved partially on the basis of disassociating yourself from the mistakes of others. This produces a sick feeling in my stomach when I think that all my work in Coq, my struggles and loneliness and hard times, will come to nought in the stigma of this criticism. I discuss the matter briefly with Charlotte. We talk turkey.

“Why did you bring all your equipment out?” she asks.

“If you’d left your equipment, you could have said you were merely coming down here for the weekend.”

“Tom has an idée fixe about getting the equipment out.”

Charlotte shakes her head. She advises me to make it clear to Mowinckel that I had no part in the decision to leave.

My opportunity comes when John calls me into his office. I sit down and he says: “I’m wondering what you want to do when you come back from leave, Fred.”

“It doesn’t matter particularly,” I tell him. “I’d rather have a project than be assigned to odd jobs.”

“I thought we’d put you to working in Press.”

“That’s fine.” It sounds like odd jobs. Phil Mayhew, my evacuated counterpart from Stan, has been writing picture captions for about a month. Nervously I start: “Say, John, I–” I’m looking down at my hands. “I want you to realize that I wasn’t consulted in the decision that brought us out of Coq.” 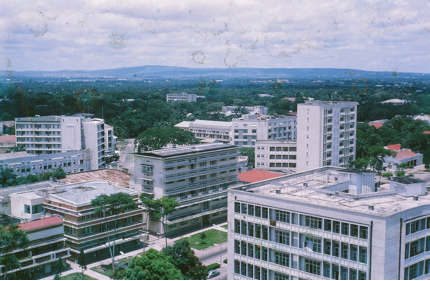 “Oh, I understand that.”

“You know I think we ought to return.”

“Well, I couldn’t go to the Ambassador with that the day after you evacuated. He’d have gone through the roof.”

“I’d like to go back. I’m afraid we may lose everything we’ve put in there. We can’t expect our audiences to accept our information if they don’t respect us.”

“What’s this with Madison? He won’t go back without his wife?”

“You go on to Europe. You’ve been looking forward to this vacation.”

A solitary lunch. The idea that the Coq experience should end in failure and vague disgrace depresses me. I’m nervous as I eat.

Back at the office I approach Mowinckel. “Look, John, why don’t you let me postpone my vacation?”

“What about your plans?”

“I haven’t any specific plans until mid-October when I meet my parents in Rome. What if I went back up until, say, October 10?”

“Let me check this out with the Country Team.” He calls Colonel Raudstein, the US military attaché. Mowinkel quotes him as saying: “Hunter can do a better job than that horse’s ass you’ve got in charge up there.” Mowinckel will discuss the matter with the Ambassador and let me know the outcome.

Before dinner a message to call Hank Clifford, the Branch Post Corrdinator. I phone him from Thérèse’s pied-à-terre. The Ambassador, he tells me, has approved my return to Coq. I’m to hitch a ride the next morning on Bugsmasher, the six-seat military attaché plane. It’s flying to the Equateur to get a situation report on Boende. I’m delighted. Relieved to feel the worry drop away, pleased to have another chance to prove myself in Coq. And yet at times in Léo I’ve noticed a tiny, almost secret feeling of relief that I no longer have to face the uncertainties of Coq. Now I have to face them again and without even a radio. (Bucks-conscious Madison made sure we brought that out.) Still I haven’t wanted to feel that I run the first time in my life that I’m confronted with danger. Do I think I’m living in a movie? Let’s hope not.

Next post: Fred’s allowed to return to Coq. But is this wisdom? Or folly?