As Fred Hunter labored to open an American Cultural Center in Coquilhatville in the remote northwestern Congo, he had an unusual experience at an art show. 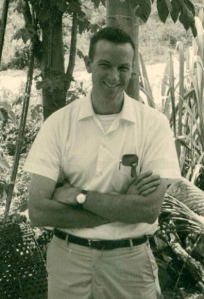 “Madame André, who does some painting, and I went Thursday afternoon to see an exposition of paintings by an Italian UN doctor. They were representational, though highly abstracted, depictions of the Congo and its life, done generally in somber colors. One could not help being struck by the violence of the paintings. They seemed a very true portrayal of what is here now, and I was interested in how thoroughly my mind rejected all of it. The violence is everywhere here, and yet you live with it so closely every day that you no longer consider it until something like these paintings throws it at you. The curious thing about the exhibit is that the doctor couldn’t be a milder, kinder person. The color, movement, rhythm, even the application of the paint is violent. You look at the fellow and wonder where it all comes from – or marvel at the control he has over it and his channel for getting rid of it. Mme André says he sometimes breaks brushes, sometimes even applies the paint with his hands. Hmm. Such a meek fellow.”

Next post: Fred travels by paddlewheeler from Coq to Léopoldville for consultation.