As Fred Hunter labored to open an American Cultural Center in Coquilhatville, his contacts with former colons revealed different approaches to dealing with Congolese.

A letter in mid-February mulled the differences between my friend Jules André and the seeming rascal Boudart. André assumed that Boudart had escaped le pillage by buying off provincial Interior Minister Gaston LeBaud. But Boudart told me that by using his intelligence and knowledge of psychology he had manipulated LeBaud to decide that he best served his own interests by letting Boudart off the hook. Nothing dishonest in that, Boudart felt.

Boudart was something of a buccaneer, colorful and vivid. Both he and LeBaud were crafty, cunning. (But LeBaud was gone in a matter of months because Provincial President Léon Engulu was no fool.) I appreciated Boudart’s apparent decision to pay me the respect of clueing me in. At the least I appreciated being told a survivalist way of operating. But was it truly survivalist? Boudart and the André’s great friends the Polish UN doctor Janusz Michejda and his wife Barbara and I were all transients. We made our contribution to the town, but we weren’t trying to survive here. The UN was already pulling out of Coq and so the Michejdas would be leaving. Boudart came for six-month stints.

André was different. He had been living in Coq for a dozen years, had stayed after the turmoil of independence although his family had taken refuge in Belgium. André and Thérèse and their four children were the brick and mortar from which a society could be built. They were not transients. But the future was so uncertain that they kept wrestling with this decision: stay or leave? But how could they stay? The kids would soon need an education that could not be found in Coq. If they left the Congo, they would need hard currency. That was why renting their house to me (the American Embassy) made sense.

I supposed that Boudart was one of the fittest that survives. Still, I sympathized with André. I wrote in a letter: “What’s strange is that for all the flexibility of Boudart’s honesty, he may in the long run be the more honest of the two men. Because, even to try to survive, André is having to change his sense of honesty. That is, his is so rigid, so exact and so dependent on the support of law and order that it can’t stand up under the strains of this place at this time.”

The letter continued: “I remember André’s first coming to me during the warehouse inspections to offer me the apartment. There was liquor on his breath. That struck me forcefully then, perhaps as a dishonest path to a decision. I remember the look in his eyes as his charmingly innocent daughter showed me where she slept, which bed was hers. And I remember the time I went over to André’s office, knocked and was mysteriously allowed to enter. A Bolenge missionary was inside buying four portable radios. It must have been a clandestine transaction – though I don’t see how it could have been; he was charging so little. Still, there was something compromised in this clandestineness. The other night at Boudart’s André is said to have eaten no dinner. I didn’t notice. Boudart claims André couldn’t eat because a cop had stopped him. Cops were stopping everyone that day. It must have been more than that – he’s dealing with a lot – but that may have been enough to trigger depression. The poor guy.

My letter continued: “Boudart claims that Congolese can make love throughout the night, but not Europeans. He and Michejda have had a fine time kidding me about Anne-Marie, a presumably mythical young Congolese of prodigious sexual appetite who would be happy to visit me. She was very accomplished, they assured me; they had availed themselves of her services themselves; she was happy to take Congolese francs rather than demanding hard currency and on and on. I found these recommendations a little disconcerting when made in the presence of Mmes André and Michejda, especially when Boudart went on to elaborate about her prowess at love à la cossaque. My being disconcerted only increased their pleasure in kidding me. 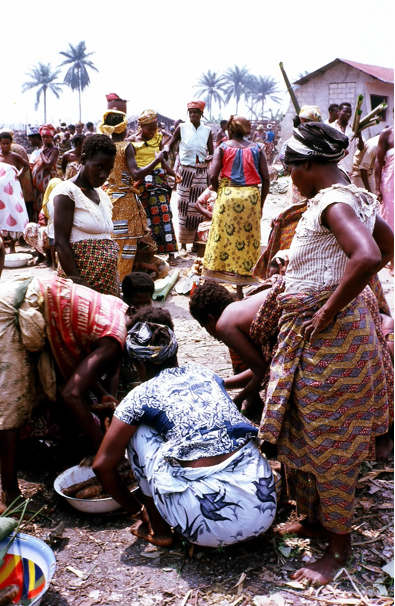 “At first I thought they were setting me up; now I suspect that Anne-Marie is a fantasy. Boudart may, in fact, have a friend of this sort, but my strong sense is that a man with a Congolese companion would not be welcome at these dinners.”

It turned out that Boudart did not have everything figured out. Weeks later when the Andrés and I had ventured onto a first name basis – more of a bonding with French-speakers than with Americans – I asked Thérèse if Boudart were married. There was a Mme Boudart, she said; Madame lived in Belgium. She had been the victim of a disfiguring accident. Plastic surgery had restored her face, but it was not the face that Boudart loved and now they were rarely together. What a fix! Poor Boudart.

Next post: Mme André takes Fred to an art show.