Generally Fred Hunter’s greatest problem in Coquilhatville was isolation. Then, astonishingly when he had been there about six months, a dozen visitors fell out of the sky including the American Ambassador who was virtually running the country. He recounts how he dealt with them.

During my week of consultation in Léopoldville in March, I learned that the embassy had decided to equip each branch post with a single-side band radio. These would facilitate our staying in contact. I returned to Coq in the attaché plane with the team of military men who installed the radio and gave a lesson on how to use it.

It very quickly proved its value. Several weeks later, for example, I was informed via radio that Iwo Pierre, an Equateur Congolese employee of USIS Léo, was to be the Coq center’s first African staffer. He and his family soon arrived.

Then I learned that USIA had decided to upgrade the Congo cultural centers into two-man posts. If the radio and the upgrading were responses to the Kwilu rebellion spreading east across the country, nothing about that was ever mentioned to me. This, however, was probably the case. One of the main reasons for having one- or two-man cultural centers in remote locations was to have a presence in the country if it began to split apart.

Since I was so junior, a more senior officer whom I’ll call Tom Madison was coming on direct transfer from Manila to take charge of the center. My challenge was to get it open and running before he arrived. I did not want there to be any doubt about who had opened the post.

A few weeks later, thanks to the radio, I discovered some surprising news. An excerpt from a letter takes up the tale:

Last Friday morning, began the letter, I was unable to get through to Léo on the radio, but heard Léo talking to Bukavu. (When you talk by shortwave, the beam is shot into the stratosphere and picked up as it bounces back. The bounce from Coq overreaches Léo much of the time and necessitates a relay through a station like Bukavu further away.) I heard Léo say that Coq was going to be surprised on Sunday morning when visitors dropped in to see him. I figured AID people might be coming and would want reservations at the Ancion. 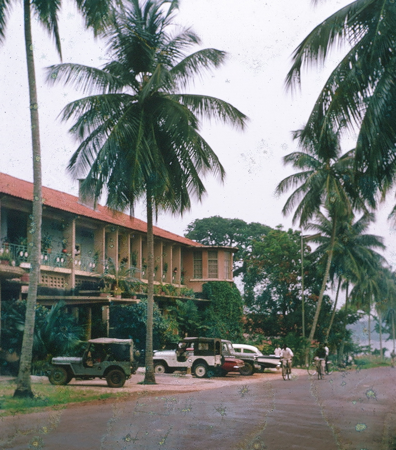 Ancion Hotel on the riverfront

I’d set aside most of the day to get final reports written before Tom Madison’s arrival the following Monday. I wanted to write my monthly report and a short thing on the USIS-sponsored concert given in Coq the previous evening by the Dorian Quintet (which proved that there is an acceptable auditorium in Coq for serious cultural efforts as well as an audience for them). I wanted also to do a piece about the downfall of local Interior Minister Gaston LeBaud who’d masterminded the merchant searches in December and apparently gathered too much power to himself.

Later that afternoon when I could hear neither Stanleyville nor Léo on the radio, I went over to the post office to see if I could find out who was coming. I did. Charlotte Loris [USIS admin officer] and I screamed at each other across three hundred miles of jungle. I discovered that Ambassador [G. McMurtrie “Mac”] Godley and an entourage of 12 people, including the British Ambassador and Tom Madison, would arrive in 36 hours. I would have to bed them down, feed them, and arrange meetings for the Ambassador with local government leaders.

An incredibly Big Deal. How could I possibly be ready?

Next post: Fred rushes to prepare for the American Ambassador’s visit.