Generally Fred Hunter’s greatest problem in Coquilhatville was isolation. Then, with only 36 hours notice, he learned that the American Ambassador and an entourage of 12 would descend from the sky for a visit.

On an overheard conversation on the single-side band radio, I learned that Coq would be getting some visitors – very soon. Later that afternoon when I could hear neither Stan nor Léo on the radio, I telephoned from the post office. The USIS admin officer and I screamed at each other across three hundred miles and I discovered that Ambassador G. McMurtrie “Mac” Godley and an entourage of 12 people, including the British Ambassador and Tom Madison would arrive in 36 hours. I would have to bed them down, feed them, and arrange meetings for the Ambassador with local government leaders.

From a letter about the excitement:

Incredibly, M. Ancion had enough room for everyone at the hotel – even enough so that Ambassadors Godley and Rose were given rooms to themselves. (Godley had the one I lived in for four and a half months.) [Obviously I had now moved to the apartment at the Andrés.] The Oasis, despite being closed on Sundays, agreed to give the group a noon meal (which turned out to be the world’s toughest chicken). The Hacienda, the town’s newly opened second restaurant, did the evening meal in real style: tablecloths, bits of greenery and napkins specially folded in the drinking glasses.

USIS Léo said Godley wanted to see US missionaries. So very late Friday afternoon Barbara Farmer and I drove out to Bolenge to arrange an early Sunday afternoon meeting with the Gary Farmers and Dick Taylors. I drove over to see President Engulu [the local governor of Cuvette Centrale Province, always called “President”], but no one was at the Presidential mansion.

Lodging was about the only thing taken care of Friday night, but that was load enough off my mind to spend most of the evening at the Michejdas (he’s a UN doctor, a very nice Pole). Left around 10:00, went home and began writing briefing papers on the missionary visit and the political scene which with LeBaud’s downfall had changed a good deal in the previous week. 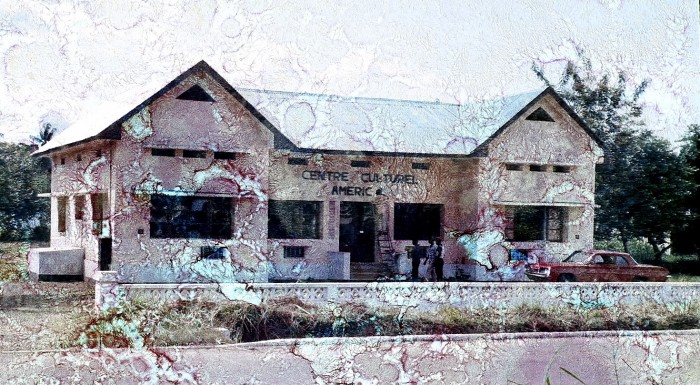 Saturday morning I got cookies ordered for a soirée at the center that I’d decided to attempt. Found Mutien Bokele, Engulu’s protocol chief, who took me to Engulu who has begun to use an office in the house where the Ministry of Finances is located. Yes, he would see the Ambassador at 4:30 in the afternoon; he would put off his trip to Léo at least a day and would attend the soirée at the center.

Got André who has gotten me out of SO MANY JAMS here to move the refrigerator in my magasin [pantry] into the center, install a light bulb in the Center’s toilet and get the portable generator working so that we could show movies in the center even if the normal electrical current were too uneven to run a projector.

Mme André checked the wording of the invitation to the soirée. Bokele, N’Djoku, Iwo and I wrote out the invitations, then Bokele and I ran around town delivering them to the ministers in Engulu’s cabinet, the president of the provincial assembly and the premier bourgmestre. (It was the first time I’d met a lot of these guys and I tried to get a really good look at them in order to be able to introduce them the next evening.)

Iwo and I also worked out a list of men who’d been to the US on AID-financed training stages. After writing out more invitations, we ran around to try to find these guys, too.

Saturday afternoon I helped Edouard get the center cleaned up, ran out to Bolenge to deliver an invitation to a fellow who never arrived (police checks, as usual, made it difficult for Congolese to get in and out of town) and to firm up the time of the missionary visit. Saturday evening dined on a moambe [a Congolese dish featuring chicken, palm oil sauce and manioc greens] at the Andrés’ new house out by the river. Left early to return to more report writing, this after pumping the assembled for the story of exactly what happened to LeBaud.

Sunday morning I finished the briefing papers (missionary visit, political situation, biographical notes on Engulu, schedule of the day, and a guest list for the soirée), carried drinks to the center, got the new vehicle out to the airport and returned to town with Nick Sapieha who was still wandering around. [Sapieha, a young Polish-American touring Catholic mission stations on behalf of the church, had been in and out of Coq.] I was starting to wash my car when I realized the plane would arrive in 25 minutes. Frantic rush to get changed. (I greeted the Ambassador with neither tie nor coat!) Got to the airport in time to park both vehicles on that section of the runway where planes are left and stuff briefing papers into individual envelopes.

If I do say so myself, what greeted that group of 14 people was pretty damned impressive for having been informed only 36 hours previously. One man in town and he has two vehicles parked on a runway seven kms from town, lodging and meals all arranged, briefing papers properly prepared. Fortunately, they were impressed. “Normal USIS preparations,” said Deputy PAO Martin Ackerman to the Ambassador.

Next post: The Ambassador’s visit and a soirée at the American Cultural Center.