After five months alone in Coquilhatville where he was opening an American Cultural Center, Fred Hunter went to Léopoldville on consultation. Since the Congo River was the main factor in the life of Coq, he chose to go by boat. His report: 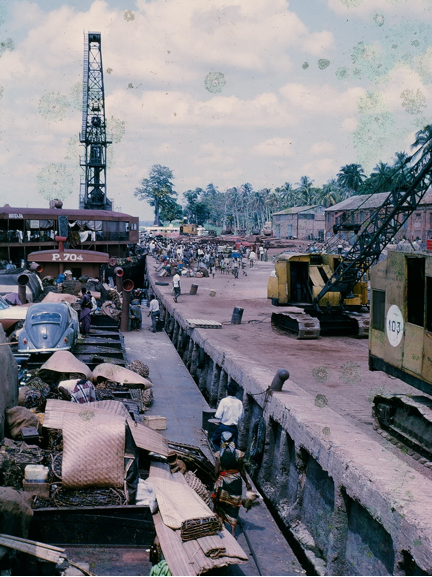 Arriving in Coq the Otraco paddle wheeler draws slowly toward the shore. It’s huge and white in the gathering dusk that sets off the wonderful African clouds against a purpling sky. People stand at the edge of the dock watching passengers on the boat and on the barges it’s pushing. Those on board watch the people on the jetty, chattering, waving, calling in that characteristic African screech. In the air a distant sound of music and there’s rhythm and music in the anticipation of these two still separated groups of people for each other. Women crowd the rails, the dusk-subdued colors of mammy cloth everywhere.

There’s the stench of Congolese humanity and fish, smoked absolutely black. Piles of bananas and blue metal footlockers (every traveler has his blue metal footlocker) and the silhouette of a monkey running back and forth leashed to a wire mesh parcel locker. (Every Otraco boat seems to have its monkey.) Now some people have found their friends; they scream at each other back and forth. The boat is now only a long broad jump from shore. I glance over to my right. A Congolese is talking loudly to a friend on board the boat. And my god! He’s urinating into the river. Right into the faces, so it seems, of all those people about to land. Absolutely wild! The real Congo! 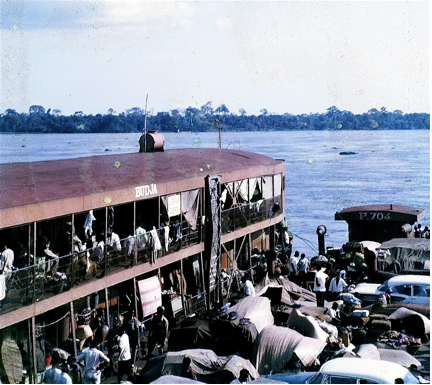 On the Congo River

You reserve a cabin by getting your name listed in a thin ledger-like book left over from the Belgian days. Then you have to wait until “la communication” is received from Stanleyville. It tells Otraco Coq how many cabins are available on the boat. La communication never arrives earlier than one day in advance.

In my case it arrived after the previous day’s closing hour. I was at the port three times yesterday and this morning at 7:40 am and still had not been able to buy a ticket. No one knew when the boat would arrive or depart. But with that typical African optimism in the face of utter and complete chaos, everyone assured me that I’d get off on the boat. I was learning patience which experience teaches us in a thousand ways.

I did make it! The paddle wheeler pushed three barges full of the most amazing mass of cargo and people. Congolese crowded the open barge decks with all their worldly possessions including ducks, chickens, pigs and a most incredible mass of dried and smoked fish. The barges were to the front of the main boat so that the fish smell poured back against us throughout the voyage.

I watched a crocodile being loaded. Its mouth was tied shut and its body lashed to a long and sturdy pole. But its tail was free and flicked powerfully back and forth. You did not want to get near that tail. It could easily knock you off your feet!

Congolese life went on more or less as normal. Women washed their children from buckets; they prepared food on little cookstoves, fetched water out of the river by dropping buckets tied to long lengths of rope. People sometimes drank directly from water lifted out of the river; that was a reminder of how healthy Congolese are, those who survive childhood. Men sat around and talked, chewing bits of smoked fish or watching women wash clothes in buckets. Off Bolobo, fishermen rowed pirogues out to come along side, cling to the side of the boat and trade their catch. 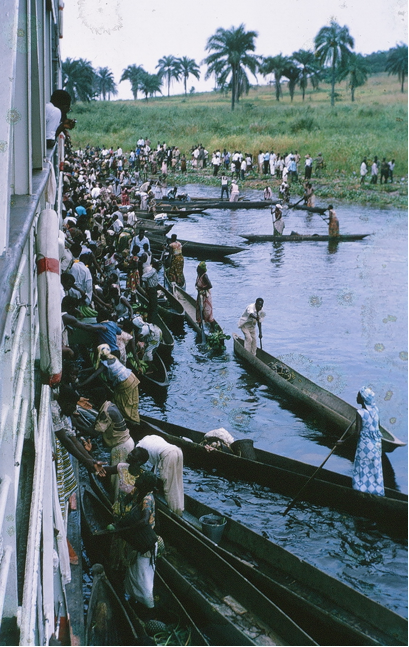 Trading from pirogues at Bolobo

My fellow passengers: A Lebanese woman whose husband is a douane (customs) expert with the UN at Libenge, north of Coq. A young Congolese army major in the Sureté in Katanga although he participated in the secession; when asked if he thought secession might flare up again once the UN leaves, he only smiled. A young German who claimed to have hitchhiked across the Sahara with a pack on his back, had studied tropical agriculture and had some idea of settling in the Congo and buying a plantation with less than $US 100. He had met two German buddies in Kano, Nigeria, and traveled to Nairobi with them where they were trying to subsist on income from prostitutes with whom they’d somehow connected. These pals had gone off to South Africa. Still the German thought they would support his Congo venture and join him in working the plantation.

My roommate proved to be a young Congolese who seemed more uncertain of me than I was of him. The cabin was tiny, hot and airless at night when closed up against insects, but perfectly adequate to my needs. Our cabin shared a bath with another which worked out well enough except I’d neglected to bring a towel though I had brought bottled water and a bug bomb. So-so food and waiters who pointedly gave whites a bad time. I got sunburned the first day and some the second, too. That sapped my strength enough so that I was content to sit and watch the world go by. And not think of Coq.

What was Donanne doing at this time? In late March, having finished the winter quarter of her senior year at Principia College, she vacationed in rural Indiana with the family of a college friend.

Next post: Back at his slumberous center in Coq, Fred has a visitor drop – almost unannounced – out of the sky: the American Ambassador to the Congo. 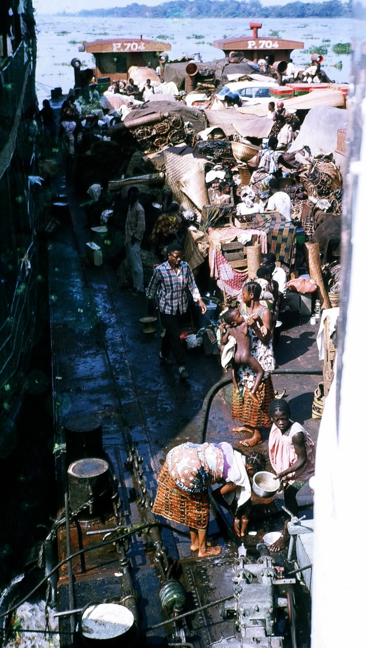 Bath time on an Otraco boat