Generally Fred Hunter’s greatest problem in Coquilhatville was isolation. Then the American Ambassador and his party suddenly visited.

Opening a post is an unusual opportunity in the Foreign Service. Especially if you have just come off a training post, as I had, in a different part of the world.

When I learned that Tom Madison would be arriving to take charge of USIS Coquilhatville, I beavered to get the cultural center open and running. Thanks to the help of Jules André and his men, we converted one wing of the center building into a movie theater, complete with exterior projection booth housing two projectors. The center began showing USIS films to library patrons. I got the library collections ordered and ready for borrowing. I began work on a project to get USIS publications circulating, not just in Coq, but throughout the region, to Ingende, Boende, Gemena, Basankusu and beyond. I got two Congolese employees working at their jobs, serving center patrons.

If my sudden discovery of the American Ambassador’s unexpected visit caused a day and a half of frantic preparation, it also gave me a chance to demonstrate that USIS Coq was up and operating and that the American officer stationed there had not simply been twiddling his thumbs.

From a letter about that visit:

The jaunt out to Bolenge to see the missionaries went off fine. We had a briefing before the Ambassador saw President Engulu at his Résidence. Ambassador was inclined to think that Madison and I should attend, but I recommended against the idea, feeling that Engulu would prefer a “high-level, confidential” meeting. Ambassador accepted my appraisal, although I now wonder if maybe his idea didn’t have more merit than I originally thought. Engulu spoke highly of Major Itambo, the local gendarmerie commander, who had arrested some Mulelists infiltrating from Lac Léopold II and the next morning I arranged a meeting for the Ambassador with him.

I guess you can’t blame the Congolese if they don’t know how to act at the kind of party we were giving. I didn’t go to dinner, but stayed to fix up the center and get drinks servers under control. The guests invited for 8:00 arrived at 7:30. We let them sit around looking at picture books until we were ready to do something with them. (I was in the office trying desperately to remember the names and titles of the ministers. Iwo tested me and I did a fair job of remembering. But as one minister came in, I looked at Iwo for help and he said in a fairly loud voice, grinning at the minister (a friend): “Don’t you know who he is?”) 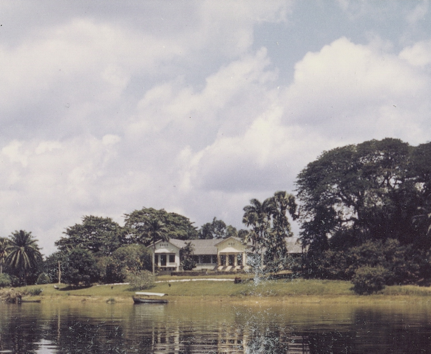 We got as many as we could to meet the Ambassador. (Those whose names I could remember I would take over to meet him.) The Congolese don’t know what to say; they are scared [American Ambassadors have been virtually running the Congo for several years]; they want to run away; they try to melt into the bookshelves. Once we got them inside the theater we were all right. They saw three films. The Ambassador made a little speech. I told the guests after the speech that brochures would be awaiting each of them as they left. And so they did.

All in all, the visit went extremely well. In a way it was better done under extreme time pressure. There wasn’t any time for timid hanging back. We’ve been needing to do something to get the top government people into the center. This was an ideal occasion.

I realize, nonetheless, that I am still tired after all the running around. Had 11 hours sleep last night and could use more now.

A curious postscript to this event: In late 2010 Ambassador Richard Matheron emailed me forwarding something Ambassador Godley wrote to family after visiting Coq. (After I left Coq, Dick and I served together in Bukavu where he was consul.) Godley’s Congo secretary Maggie Conrad Johnston had recently transcribed the letter from long ago dictation. Godley wrote: “Last Sunday, April 19, I set out on my first junket around this fascinating country… Our first stop was Coquilhatville… There we have a one-man USIA office and this poor fellow had only heard of our arrival some 48 hours before. He had, however, done the impossible: gotten us rooms in quite a decent hotel overlooking the Congo River, most of which were air-conditioned… from 6:00 p.m. to 7:00 a.m., had arranged transportation and even had typed out an elaborate schedule and notes on the person we would be seeing.”

Next post: With a second USIS officer now resident in Coq, Fred is able to take a trip into the deep and mysterious bush.