When a second USIS officer joined Fred Hunter at the American Cultural Center in Coquilhatville, Fred was able to travel. A local missionary offered him a trip to the deep bush and he took it. Here’s his report:

Shortly after Tom Madison took charge of the Center, I learned from Betty Erlewine that Disciples of Christ Congo Mission doctor Bob Bowers would be driving a Volkswagen Microbus, called a “combi” by the missionaries, to a station in the deep interior. I wangled an invitation to tag along.

We drove east from the mission station at Bolenge, following the watershed of the river known variously as the Ruki, the Busira or the Tshuapa. (A Congo tributary changes its name every time a sizable tributary enters it.) We drove on roads once well maintained. Now, three years into independence, they were deteriorating. Rain carved deep ruts into their surfaces. Now that overhanging vegetation was no longer cut back, the orange-colored roads did not dry quickly after rain. Passing vehicles dug holes in them.

The road would rise to a ridge, then descend to a watercourse. Over it lay a bridge of logs. Bob would stop the combi and I would get out to check that the bridge was solid. I would guide him to the other side and we would start toward another low ridge. The rivers we drove beside or crossed were old. They doubled back and forth, changing course. They meandered, formed horseshoe lakes, drained the water from vegetation that was intensely green.

Occasionally we passed through villages, brown clearings where clusters of thatched huts and dirt dooryards lined the roads. Naked children would rush out to wave. Adults would watch, men sitting in dooryards, swept clean of vegetation as a protection against snakes. Women ambled between huts, wearing only strips of cloth between their legs, these held in place by strings or thongs tied at their hips.

At every village animals would dart across our path: goats and chickens, ducks and dogs. It was important not to hit them because then there would be long palavers about compensation. But avoiding them was not easy. Goats seemed mesmerized by the combi as if its motion required an answering one. They would race across the road at the last moment as if testing their daring and their speed. We never hit a goat or dog; chickens were not so lucky. Once three fled into the road just in front of the vehicle, squawking and flapping wings unaccustomed to flight. We hit them broadside. They seemed to be coming through the windshield, feathers flying, the birds landing on top of the roof and bouncing, bouncing backwards, until they landed again on the road, only their dignity damaged. 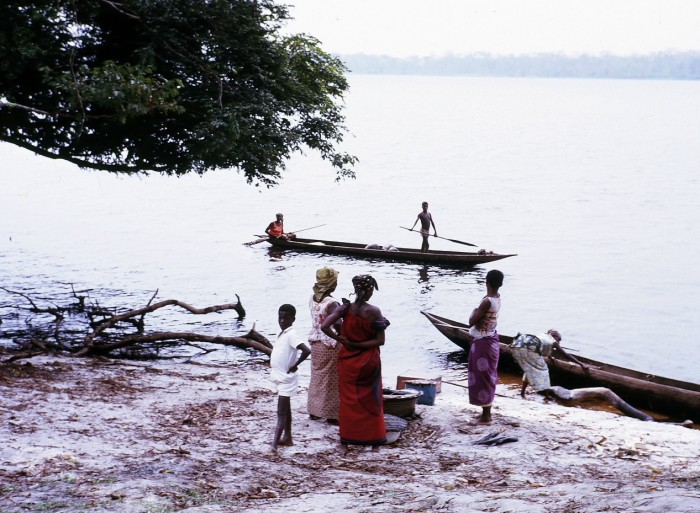 Congo River scene. Is that a croc?

At lunchtime Dr. Bob stopped the combi at the side of the road. We’d been eating a while, not bothering to converse, when a small man, well short of five feet, appeared out of the jungle. He was naked except for a pair of old, torn shorts. He carried a panga, a long knife, and jumped, startled, when he saw us.

I looked at the little man. He examined both of us, then started talking.

“Or pygmoid, to be precise,” the doctor added. “He’s a mixture of pygmy and other strains. The Mongos don’t regard Batwa as human.” The Mongos were the main tribe of the area. “Of course, they were here before the Mongos arrived.” The doctor scrutinized him. “He’s been smoking hemp.”

As we continued to eat, the man kept up his flow of words. He harangued us, whimpered, sat on the ground, threw down his knife in frustration, beat the earth. “What’s he saying?” I asked.

The pleas went on and on. Bob opened a small can of turkey and ate it with a metal fork. “Gimme twenty francs,” Bob said, translating the pgymy’s demands. “Ten francs, five francs… Gimme a shirt.” When Bob finished his lunch, he wiped the fork on a napkin and set the bottom of the turkey can within easy reach of the pygmy. “Lots of uses for a can like that in the forest,” he said.

As we prepared to leave, the man hurried forward, picked up the can, sat down within two feet of the combi door and went on whimpering. When we got back into the combi, he shouted at us. “Hey! Where’s my five francs? You promised me five francs!” We drove off. I watched the man sitting on the road, mumbling to himself and examining the can.

This trip to Congo mission stations formed the background for the story “Elizabeth Who Disappeared” in my collection Africa, Africa! Fifteen Stories, published by Cune Press.

Africa, Africa! is available from Cune Press, www.CunePress.net. Just now Cune is launching ebooks. To test the distribution system, Cune is offering Africa, Africa! in its ebook edition at the low, low, low price of $4.95 . . . less than half the standard ebook price. This offer extends from May 15 to June 15 only. You can’t buy a hamburger for this price. And this will feed you better!