When a second USIS officer joined Fred Hunter at the American Cultural Center in Coquilhatville, Fred was able to travel. A missionary offered him a trip to the deep bush. He took it and got to know missionary doctor Gene Johnson.

After my visit to his surgery, Gene took me on a short jaunt to Bokote. I came to feel a real sense of respect and friendship for him. He told me about his work as a missionary doctor; he spoke without the self-importance that some doctors assume about themselves. Without the self-dramatizing of those missionaries who seemed always to mention that they were serving in a “benighted land,” in “the heart of darkness.” After six years in the Congo he felt he was reaching his maximum usefulness. He handled the doctoring without difficulty, he said. He knew enough of the local language and customs to work effectively with Congolese.

And he liked the people. We stopped at the hut of a Congolese because I said I’d like to see how villagers lived. He and the householder greeted one another affably. I peeked inside the hut. The host asked if I’d like to try my hand at shooting the arrows they used for hunting. I obliged and my awkwardness amused him. I also bought a rattle with bottle caps inside it.

At Bokote Gene introduced me to a Catholic priest, a docile old gray-beard who had been in the Congo almost forty years. He’d just wakened from his sieste, entered sleepily in a threadbare white soutane and reminded me of a teddy bear. He had a gentle, patient sense of humor, a kind of hands-thrown-up attitude toward the Congolese and their future. Catholic priests did not strike me as participating in the life process in the same way that the Protestants did with all their kids. The Congolese for whom procreation and children were such vital parts of life must have felt baffled by the priests.

I told Gene that he seemed perfectly cut out for the work he was doing. I wished I felt as much purpose in my work. He nodded. Then after a moment he said that his wife was lonely. Her life on the station did not give her sufficient social outlets. She worried about the children. So, Gene assumed, the next time they went home on leave, they probably would not return. That likelihood distressed him. He did not want to go back to a kind of doctoring where his professional conversations with colleagues centered on investments, on getting rich. 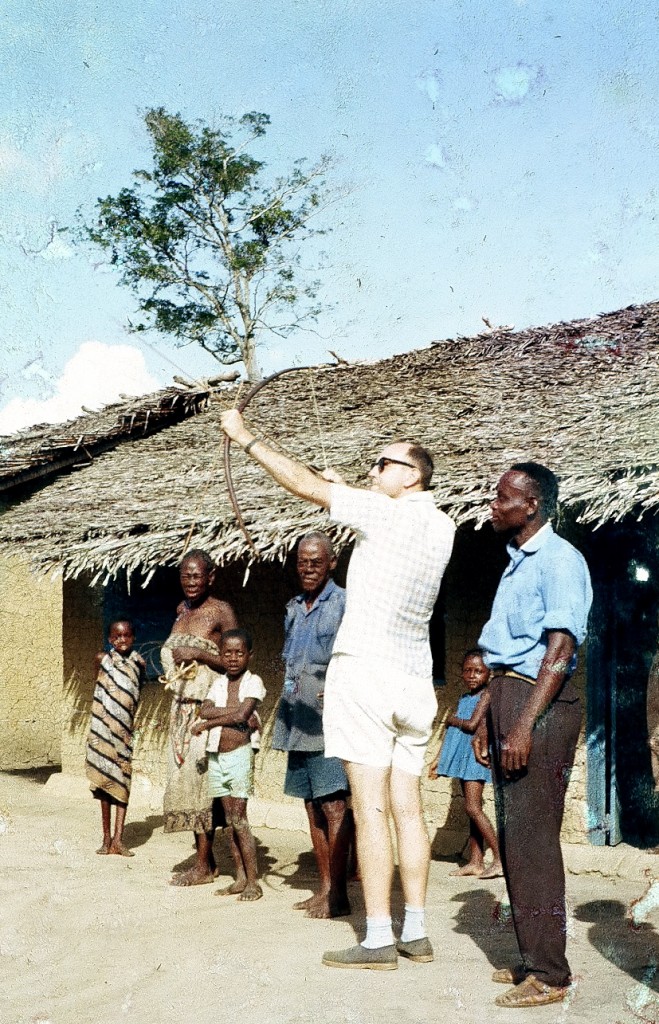 Distressing, I thought. I wished Gene’s wife were more adaptable, because although I had expected back-country missionary life to be full of hardship, I did not find that to be the case. Yes, real limitations characterized that life, limitations of creature comforts and distractions, of intellectual stimulation. But the stations struck me as places of real interest, of great leisure and sometimes of incredible beauty. The life seemed often easy, certainly not taxing in the sense that the daily grind of city living could be. Nature could bring refreshment, much of it splendid. On the stations I swam in slow-moving rivers, read, played cards and other parlor games, took walks, went canoeing on the river and into nearby swamps, watched monkeys, chattering, playing, feeding in the tall trees just before dusk. For me, strangely, the Congo bush seemed to possess potential as a place of renewal for the world-weary.

What was Donanne doing at this time? In June she graduated from Principia College. She flew to Hong Kong where she met her parents and went with them to Pnom Penh, Cambodia, where her father was assigned as the American Embassy’s administrative chief. Before the end of the summer Donanne and her mother moved to Kuala Lumpur, Malaysia, while her father stayed in Cambodia to close the embassy.

Next post: A deep-bush woman and a missionary doctor’s tale.

This trip to Monieka and the people met there served as the backdrop of Fred’s story “Elizabeth Who Disappeared,” published in his collection AFRICA, AFRICA! About the book or the blog contact: FredericHunter@aol.com.