When Tom Madison took charge of the Cultural Center in Coq, Fred Hunter was able to travel. A local missionary took him into the deep bush. There he became acquainted with a missionary doctor. His report:

Missionary doctor Bob Bowers and I drove east all day through jungle and swamp. At Ingende, we chatted up the Territorial Administrator (to whom I presented USIS materials), found the ferry disabled until it borrowed our vehicle’s battery and on the north side of the Ruki rode all the way to Djoa on a kind of dike, impressive engineering for the jungle. (If not well maintained, this road would be lost.) At the turn-off to Bokolongo we headed down to the river and the DCCM mission station at Monieka. We arrived just before dark.

Monieka Station was a string of yesteryear houses with wide eaves and screened porches, a church, a school, a dispensary, a surgery and a high school for missionary children from the entire breadth of DCCM territory.

I had hardly gotten my bearings when Dr. Gene Johnson invited me to attend an operation or two the next morning. Well, why not? I sensed immediately that Gene did not possess the kind of personal warmth that immediately attracted people to him. That’s a kind of warmth that many evangelizing missionaries boast in abundance. In fact, one of the missionary teenagers described Gene as “creepy.”

Talking about visitors, Gene said some Bolenge missionaries had witnessed an operation on a man whose belly was swelling. After cutting into the patient, Gene discovered the swelling was caused by internal bleeding. He released something; blood flowed out all over everything and within two minutes the patient was dead. Hmm. No self-promotion at jungle mish stations. I hoped I wouldn’t see that.

I arrived at the surgery early the next morning after taking a swim in the Busira. (The river was where the missionaries bathed. By the time I rinsed off, I had an audience of fifteen Congolese kids.) The room was perhaps fourteen feet square. Gene was working in a cap, mask and smock, all clean, but none ironed. Underneath the smock he wore a pair of Bermuda shorts, no shirt. Four Congolese nurses assisted him. Three male nurses were with him at the operating table. The lone woman nurse gave me a mask, smelling strongly of disinfectant.

Gene talked to me casually in an English the Congolese did not understand. He commented on the operations (three hernias that morning) and asked about the films I would show that night. He inserted a nerve-deadening agent into the vertebra at the small of his patient’s back. 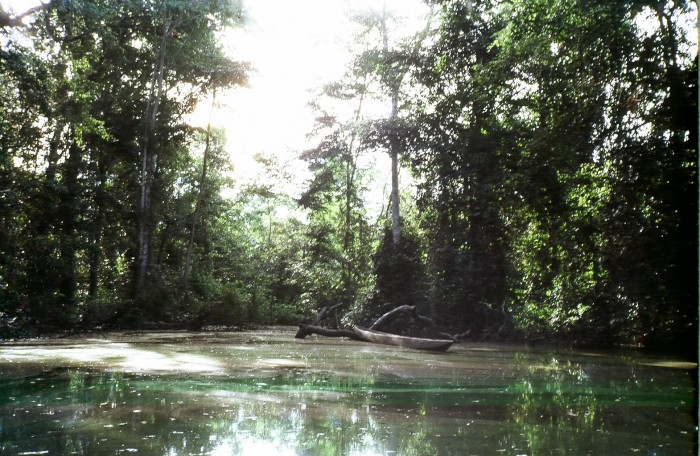 Gene was not fat, but loose flesh hung over the top of his shorts. The patient was a man older than Gene. But there was not a scrap of fat on him. Gene had the mental development and skill with instruments that the Congolese lacked. The Congolese had the physical development Gene lacked. I had seen remarkable physiques among the Congolese. And no wonder. Paddling pirogues on rivers is hard work. It produces tremendous back, chest, arm and leg development. Women had amazing posture and muscular development at the neck and shoulders from carrying loads on their heads. I watched a woman, naked to the waist, picking potatoes in front of Gene’s house the next day. When she stood, her back to me, I could not tell if she were a man or a woman. “She’s been carrying loads on her head,” Gene said.

When I watched Gene slice open the patient’s lower abdomen, I glanced at the patient. He was awake and looked uncertain, aware that the operation had started, but unable to feel anything. I got woozy – blood, heat, the incision, the disinfectant in my nostrils – and felt annoyed with myself. Gene sensed what I was feeling. He suggested I sit outside with my head between my legs. It was wonderfully cool out on the surgery steps. I stripped off the mask.

I had dinner with the Johnsons. Gene’s wife was shy, reserved, a quietly pretty girl who wore glasses. I wondered if she used them as a transparent shield to hide behind, as a way of removing herself from contacts she did not want to handle. She was cautious with people, not outgoing and open as it behooves missionaries to be. She served tuna casserole to her family at the dinner I ate with them. Gene lightly kidded her about the meal. She admitted to me – and later even showed me – that she had pantry shelves stacked high with cans of tuna. And a small box filled with tuna recipes. So her reserve extended to eating carefully, to living in a place that could easily be seen as forbidding, among people who were not only physically, but also seemed metaphorically, dark. She acknowledged that she worried about her kids. I sensed a disquiet between her and Gene. Perhaps they were too much alike.

I wondered if he knew how to woo her, if there were romantic moments late at night – balmy air moving from the darkness into the screened bedroom, candles, soft music from a radio, the regular breathing of children down the hall, the tastes of kisses on their lips – when Gene lifted the glasses from her and told her she was beautiful. Perhaps. Movies could show a guy how to do that. But in the bush Gene had no occasion to see such movies. And he was too serious to have bothered with them in med school. Sweet-talking, even at so rudimentary a level, did not seem his style. Still, I suspected that a high priority on a mission station was keeping a marriage in good repair. I wondered if they were doing that.

This trip to Monieka and the people met there served as the backdrop of Fred’s story “Elizabeth Who Disappeared,” published in his collection AFRICA, AFRICA! Check it out at http://www.cunepress.com/Africa.