Sometimes travels in Africa involve visitors coming to you – even in remote Coquilhatville in the northwestern Congo. Often you’re surprised at who turns up. The third of three examples: 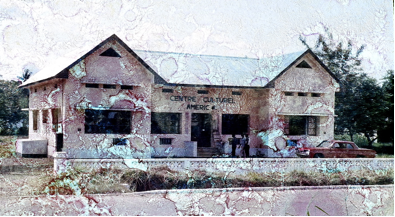 American Cultural Center, Coq (with apologies for the photo)

Headquarters in Washington views the guys way out at the end of a chain as names that turn policy into action. Still, they are merely names on a manning chart. The guys themselves often feel forgotten and unappreciated. But does that mean they want the Big Boss to drop unannounced out of the sky?

Tom Madison and I were in the office one morning. The electricity was out. The center was a mess due to Congolese independence celebrations. Fortunately, patrons were in the library. A generator-powered film show was soon to begin.

A UN jeep pulled up before the center. Out of it stepped three visitors from Léopoldville: Hank Clifford (as I shall call him), the USIS branch post co-ordinator; Martin Ackerman, the embassy’s #2 USIS man; and just in from Washington the Agency’s top man for Africa, Mark Lewis, boss of us all. Just dropped out of the sky. From E Street NW with tie, Ivy League suit and shined shoes. We grinned our surprise, our delight. Lewis beheld us in all our informality: no ties, cotton pants, sandals.

Advance warning? None. Just in for an hour and a half to see us on their way somewhere else. We jumped immediately into a discussion of program problems – though not our befuddlement at the purpose of so tiny and marginal a post. Then personnel matters, future plans. I did not want to discuss my future in the presence of Hank Clifford. He seemed always to belittle my interests; he had urged Madison, for instance, to pull rank and bounce me out of the André house. Clifford was to depart in September. I did not want to discuss my future until after he left.

But we did discuss our futures here, on the fly, when Madison and I had been vouchsafed no time to prepare. Madison went first. He did not disguise his anger at being sent precipitately to this jungle outpost. He noted that while usually the ratio of American officers to local employees was one to five, sometimes one to eight, here in Coq it was a wasteful one to one. He told Lewis that if he were not promoted in January [the promotion list came out once a year in January] he would resign. A civilian job was awaiting him, he claimed, and he would take it.

A letter of mine about the visit noted: “You live with the hardships of this place every day and think you have them pretty well under control. Then a situation like this visit comes along and they spill out forcefully. You’re surprised how close to the surface they really are.” (Madison’s emotion must have encouraged mine.) I told Lewis that Coq was a rough post for a single person, that I did not want to spend my 30s in places like Coq. I must have known that this would be my sole encounter with him, that I would be foolish to let his only recollection of me be of a griper. With preparation I might have finessed it, but not this way.

The discussion continued as we drove to the airport. Lewis noted that I was not scheduled to leave the Congo for another thirteen months. I had hoped for something earlier. Clifford stuck in his kiss-ass two cents, infuriating me. Emotions I thought were under better control kept popping out. [I wonder now, all these years later, to what extent my feelings were influenced by the fact that Madison’s arrival had turned a job that challenged me into one that proved increasingly boring.]

Lewis did seem grateful to hear that Tom and I liked the work. Neither man in Stanleyville did; neither wanted to stay; neither felt the post should be there. Lewis must have found morale low all over the Congo: marginal posts overstaffed; a hiring freeze making it impossible to bring on new locals to extend the work. For example, I was eager to take films into the hinterlands. But Madison nixed that, contending our vehicle could not safely navigate back-country roads.

Once the visitors left, I took refuge in reading. My letter notes: “Paris est une fête (A Moveable Feast), Ernest Hemingway’s account of the Paris years arrived last week. To read about Paris in French gives the book more flavor somehow and left me with a feeling of nostalgia for the time I’ve spent there. I enjoyed it, finished reading it this morning – in French.”

Madison’s morale improved when his wife Sally arrived from the Philippines and they established themselves in a house. But the Muleliste rebellion was already headed our way. It seemed certain to imperil our work at the center.

What was Donanne doing at this time? In June she graduated from Principia College. She flew to Hong Kong where she met her parents and went with them to Phnom Penh, Cambodia, where her father was assigned as the American Embassy’s administrative chief. Before the end of the summer Donanne and her mother moved to Kuala Lumpur, Malaysia, while her father stayed in Cambodia to close the embassy.

Next post: An anti-government, anti-American, anti-white rebellion spreads across the Congo and menaces Coquilhatville. And the question is: Stay or run?