When a second USIS officer joined Fred Hunter at the American Cultural Center in Coquilhatville, Fred was able to travel. A local missionary offered him a trip to the deep bush and he took it. He picked up insights even the last day of the trip.

The next day Dr. Bob Bowers and I drove east again, this time with three girls from the missionary high school at Monieka. It was late May. Their school term had finished. Kay Bowers cuddled Nuisance, her pet mongoose, a funny-looking, long-nosed ball of fur. When we stopped for lunch with Disciples of Christ people in Boende, a plantation town, Frank Coburn regarded Nuisance and mumbled, “I wonder if he’d make good eating.” Then he looked at me and said, “I guess you haven’t been out here long enough to think things like that, have you, Fred?”

Just before Boende the Busira divided into two rivers, the Lomela, flowing south, and the Tshuapa, flowing north. We followed the Tshuapa. It was a long haul to Mondombe Station and the girls kept asking when we’d get there.

As we rode along, Bob Bowers told me a bit about the local language. With Gene Johnson I had wished I could speak it – out of the question! – because the Congolese were friendly. Bob said that if he wanted to show a person respect, he would greet him in Lonkundo by saying: “Olecko.” That means more or less: “What is your proverb?” He used these proverbs: “Go carefully;” “Look on the other side of a fallen tree before stepping over;” and “By and by the monkey came.”

This last refers to a Nkundo folk tale. A bunch of monkeys playing in a tree were warned that a hunter approached. They began to scatter. But a curious monkey decided to stay, Curious George probably. He told the friends who urged him to leave, “You go on. I want to see what the hunter looks like.” The friends hid in trees down the road. They heard the hunter shooting arrows and wondered what had happened to their friend. And by and by the monkey came, ready to make the hunter a nice meal. 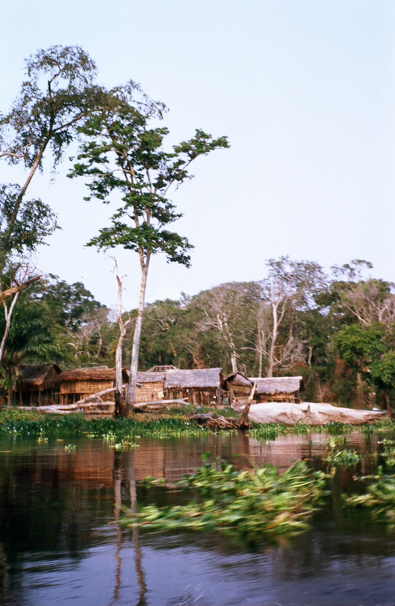 I showed movies at Mondombe and the morning I was to leave, the mission plane arrived. It drew a crowd. When the onlookers drifted away, I happened to catch sight of a woman of the sort seen only in the deep bush. She wore a loincloth; that was all. I watched her observe the parked and inanimate plane as if it were a creature as strangely beyond her world as the creatures of her world – monkeys and elephants – were beyond mine. Tall, with scarification designs on her back and braids of tight-coiled hair sticking out all over her head, she scrutinized the metal bird. Slowly on long legs she approached it. She moved near the plane with an instinctive caution about the incomprehensible and unknown. She stopped, absolutely motionless.

Then she reached forward, her breasts hanging like wide, thin flaps. She extended an arm and lightly laid her hand on the skin of the wing, ready to dart away if the creature should move. But it did not move. Neither did she. She let her hand rest on that white and yellow metal bird which would always remain incomprehensible to her. She may have stayed there till it flew off. But the combi was leaving and I had to leave with it.

As we retraced our route, Dr. Bob Bowers told occasional stories. He mentioned a man he’d examined at Lotumbe. The patient complained of leg pains. Bob could detect nothing wrong. Neither could another doctor who was consulted for a second opinion. The patient insisted he was sick; he grew progressively worse. Finally he walked about using two canes, then with women holding him on either side. Soon the women were preparing him special food. He was reduced to sitting all day. At last he went back to his home village, prepared to die.

But he did not die. Instead he consulted a witchdoctor. Bob discovered this months later when he was traveling near the man’s home village. A church member asked Bob for three thousand Congolese francs, at the time about $60. “Who needs so much money?” he asked.

“A friend is badly in debt to the nganga,” the woman said. “Here he comes now.” She pointed to a man carrying a huge log. He was the man Bob had examined. He was now working off the debt he owed the witchdoctor.

“How was he cured?” Bob asked.

“The nganga had him buried up to his neck,” the woman said. “Then he dug holes nearby. He started fires in the holes.”

“And that cured him?”

“He begged to be unburied and has walked ever since,” the woman said.

Bob laughed, driving along. “Get well or get roasted! And he’s walking okay now. We should take lessons from these guys.”

What was Donanne doing at this time? In June she graduated from Principia College. She flew to Hong Kong where she met her parents, returning with them to Phnom Penh, Cambodia, where her father was assigned as the American Embassy’s administrative chief. Before the end of the summer Donanne and her mother moved to Kuala Lumpur, Malaysia, vacationing on the island of Penang while her father stayed in Cambodia to close the embassy before joining them.

Next post: Donanne reappears!!! She’s off to conquer the world – well, at least college.

This trip to Mondombe and the woman touching the plane serve as the backdrop of Fred’s story “Elizabeth Who Disappeared,” published in his collection AFRICA, AFRICA! For a copy contact FredericHunter@aol.com.