By early August the American Cultural Center in Coquilhatville was manned by two American officers, Tom Madison and Fred Hunter and three Congolese: Iwo Pierre, who had done a “stage” in the US, N’Djoku Pierre (n’djoku means elephant) and Ahenga Raphael, a driver. The center included a library of books about the US or written by Americans, a film program that showed films locally and in the bush and an effort to circulate various materials – newspapers, pamphlets, magazines, even books – to target audiences and connect with opinion-makers.

Working with Congolese was often taxing, both for us and for them. Snippets from a letter suggest the problems – on both sides.

“I’ve been telling Tom for some weeks that I think we must supervise these guys more carefully. It simply is not fair for us to get upset with their mistakes if we are not giving them enough supervisory support. I do not agree with Tom’s giving Iwo instructions in English. He does this, Iwo fakes comprehension, then Tom is upset when the job is not satisfactory. More and more, I see our relationships with the men who work for us in terms of grammar school teacher and pupils. This is really a kind of classroom laboratory experience in ‘How We Do a Job.’

“For example, I badger N’Djoku three times a week to straighten up the Nouveaux Horizons books that are his responsibility. I ask, “Who takes care of these books?” He is silent for a long moment, his brow furrowed, his jaws clasped firm, his mind a tiny nucleus of concentration. “I do,” he says finally. If I pose a question to which the answer is for us either yes or no, N’Djoku gives a long pause. “I must think,” he says. Of course, he is deciding what answer will do him the least harm. Pierre Bogaerts feels this is merely another approach to truth. It’s amusing when you have time for it, but I feel unhappy at having to badger these guys…

“Iwo, Raphael and I went to Bikoro Friday afternoon to show movies in the town itself and at a rubber plantation. We’d written a letter and telegraphed the time we’d be there, but neither telegram nor letter arrived. We must still solve the problem of calling people to the showings. We drove through the cité calling, ‘Cinéma ce soir å la plaine de football.’ We got about 500 at each showing.” We set up a translucent screen so that people could sit on either side and a projector on the film truck. At first I thought grassy spots were more desirable, but soon learned that people wanted to sit on dirt where the likelihood of snakes or rats were less. 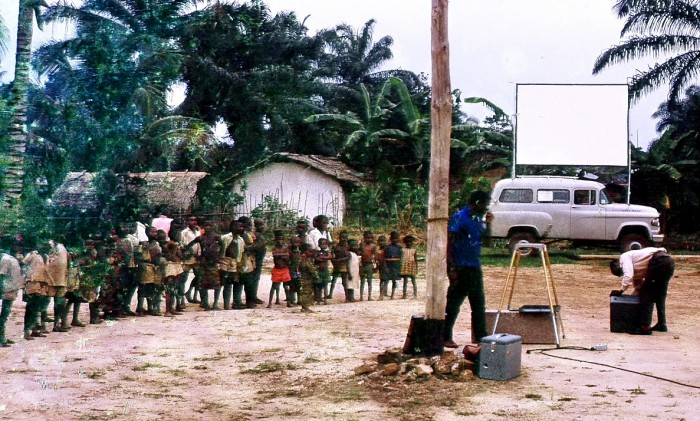 Setting up a film show

“After the showings I was tired and went immediately to the lodgings provided in an abandoned house overlooking Lake Tumba. A crude bed and mattress and rats skittering across the floor. (I put everything out of their reach on a windowsill, except a box of matches and a candle I waxed to the floor.) Having brought my own water, pillow and sheet, I was quite comfortable. Bouncing along African roads really takes it out of me. I slept most of yesterday afternoon after we got back.”

The letter goes on: “Rebels operating out of Congo-Brazzaville (where they have training camps and 5,000 Communist advisors, so it’s said, are advising them) crossed the Congo River during last week to take Bolobo, a mission station and port town, 120-150 miles south of Coq. Troops were flown from Coq to Bolobo and reports yesterday were that Bolobo had been retaken. Should rebels entrench themselves at Lukolela and Inongo, capital of our neighboring province to the south, Bikoro will emerge as a likely target with Coq waiting like a jewel at the end of 125 kms of road.

“I think it would be rather amusing to be evacuated. As I was telling Madison, if that happened I would have crowded into two years in the Foreign Service all the possibilities of the life: service in an important European capital [I had served in Brussels]; in the capital and bush of an underdeveloped country; set up a post; taken bush trips, etc., etc. If I could cap it off with an evacuation, all the rest would be repetition.” 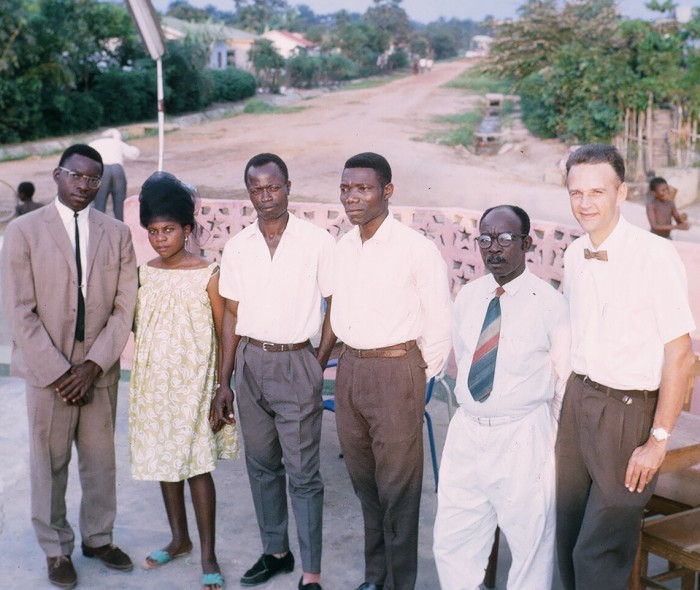