Fred and Tom Madison try to understand The Situation. Not easy.

I made notes on the reverse of the letter 8/29/64 quoted in the last post. They said:

All Congolese talking of the rebels, calling each other Soumialot, for instance. [Gaston Soumialot was one of the leaders of the rebellion, a lieutenant of the Congo’s executed first premier Patrice Lumumba.]

People being evacuated from Ubangi via Bangui [capital of the Central African Republic], to Coq, to Leo. A plane load came in as I waited with Andrés for Bugsmasher. MEU missionaries beaten up, their vehicle commandeered as they tried to get across at Bangui, Thursday a.m.

Rainy season has started. Heavy rains Thursday morning before sunrise, all morning Sunday. Haze gone. Sky has regained its clarity and lovely cloud formations. When sun shines, it’s hotter than for last 3-4 months. No haze? This dry season has been particularly long. Choruses of bullfrogs after a rain. Are they mating?

Just a quick note to keep you informed. As usual the Situation is as complicated and fluid as ever. Sunday an Air Congo plane was shot at trying to land in Lisala and was forced to seek another airfield. Monday a C-130 passed through here on its way north to Gemena to leave ANC reinforcements. There have been troubles in Ubangi for about a week now.

Radio Bobcat (Embassy Léo) relayed the message from Top Hand (the Ambassador) that Sally Madison should return to Léo “on consultation.” This at 11:00 for a 2:30 departure. “I have nothing to tell the Ambassador,” said Sally and she has stayed. But the Madisons sent out two large footlockers and their VW. I sent out a crate of my “valuables:” my notebooks and files, linens, winter clothes, my overcoat and tux, and an ivory tusk. Three women missionaries and their children also went on the plane. Two will continue on to the States, the other waiting in Léo to see what developments bring.

Yesterday Tom decided that we should leave next Monday, in five days. The idea is to get a C-130 up here to take out us and our belongings and the most valuable Center equipment. We had a short meeting with the staff late yesterday. Today we began to pack movie projectors and speakers, the addressograph machine. This morning we delivered the bulk of our Nouveaux Horizons books to local schools (although this was a project already scheduled). I’d personally like to put some equipment on planks between the roof and the ceiling: folding metal chairs and other stuff that intense heat, humidity and affectionate rats would not harm. I presume we’d do this more or less covertly. You don’t really hide anything if two or three Congolese know where it is.

It’s now 5:15 Thursday morning. I couldn’t stay awake last night. We seem to do nothing all day but listen to the radio and try to piece out bases for intelligent decisions. It’s wearying, although not physically.

I am beginning to realize how itchily ready to get out of here Madison has been for several weeks. When he went to Léo ten days ago, I thought it was to clarify things about our operations. But I wonder now if Tom may not have been seeking permission to leave. “I can’t make your decisions for you!” the Deputy Chief of Mission was supposed to have shouted at him. Tom talked at some length, I gather, with Max Kraus, former BPAO in Stanleyville. Kraus feels that the USIS departure from Stan was handled in an unnecessarily hasty and disorderly way. Stan’s intelligence was good up till about three days before the town was taken; then the rebels outran the intelligence estimates. Kraus had to hotfoot it to the airport with what he could carry. Mike Hoyt (US Consul in Stan) & Co are now presumed to be in jail as hostages. Last message from Hoyt, assumed to be broadcast under duress, asked that US stop its support of Tshombe govt and its military aid. “It may mean our lives.”

Madison lays greater stress on monetary considerations than I do. He keeps wanting to get the equipment out. He suggested yesterday that I go through our library collections and withdraw all “expensive books.” I can imagine those “expensive books” getting tossed around a Léo warehouse, covered with dust and cobwebs, forgotten in a corner, sitting in water during the rainy season. I told Tom I thought it a good suggestion when its priority came around, which we agreed would be late. Yesterday when things turned critical in the Ubangi, Tom came back into the office feeling pleased with himself, feeling exonerated about what people have called his undue pessimism. He said: “I’m going to get my skin out whole and your skin and Sal’s and I’m going to get out some of the equipment!” 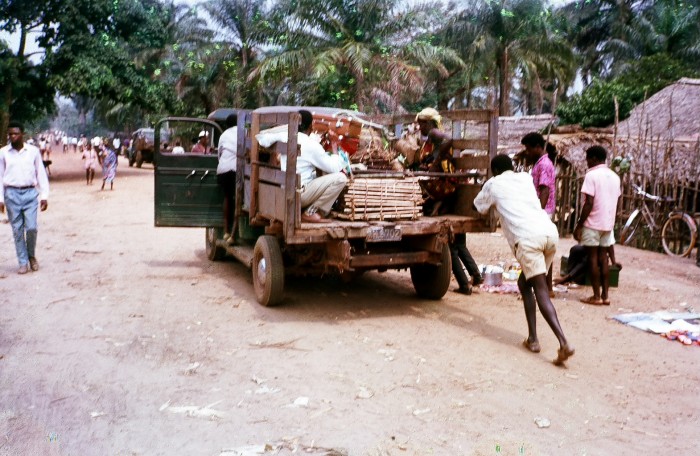 Street scene in the cités of Coquilhatville

Tom has checked with me right along to see if I agreed with his decisions and I do agree that as a USIS post we have all but lost our usefulness. Given that fact, it’s silly to take risks simply to stay in Coq. We know there are US hostages in Stan. We know also that there is no will to defend Coq from the rebels. It’s said that the town is full of jeunesse, armed with smuggled weapons. I happen to disincline to the possibility of some sudden combustion of these elements. I don’t think they’ll explode until they can work in conjunction with rebel army elements moving toward Coq. Past experience seems to have been that the jeunesse aided the rebel troops, but not before they were fairly close to the town. Tom stresses the advisability of a “graceful withdrawal.” That seems a funny way to describe an evacuation. It’s a plodder’s approach, I think; it lacks a little something of flair.

I told Tom yesterday that I thought it was a bit too early for us to make an evacuation, that it could do him professional harm. You “come out smelling like a rose” (to use his term) if you evacuate, particularly if with a suitcase and a few singed hairs. But if you get out too early, you look a little silly, regardless of how many machines you’ve brought with you. Maybe people oughtn’t to think this way, but they do, and you’re silly not to take account of it. His response was: “The professional harm is nothing compared to the physical harm of waiting too long.” Of course, there is no answer to that.

Of more concern to me is my fear that Tom will pull us out before the missionaries go. “I’ve been acting like a Consul up here,” he whines. “I’ve been acting like an intelligence officer.” To me, that seems a strange way to react to opportunity. “We have no diplomatic status,” he says. “It’s not my job to get these people out.” Well, I’ve been over this ground with both him and Sally, explaining my opinion that we are people working for our government and that our govt now needs us to do a consular job. I don’t care what the title is!

I told Tom I’d volunteer to stay on standing by the radio. “If you stay, I can stay,” he said. I told him I thought it would simplify things if Sally left. So she’ll probably start considering me a threat to her marriage. The thing that kills me about not looking at this situation as an opportunity is that it is exactly what Madison needs to get this promotion he bitches about. It’s the kind of opportunity that kicks a man one step up the line. He should be grateful for it.

Next post: As The Situation deteriorates, preparations for evacuation continue. Significant differences remain as to when it should occur.