As the rebellion gains force, the likelihood of Coq’s being threatened seems inevitable. Rumors fly around the town. Coquins flee to Léopoldville.

Went out to the airport Thursday afternoon. The military attachés had gone to fly over Lisala and Bumba [north of Coq], and Madison and I went to meet their plane while Sally showed Mowinckel the sights. (The plane didn’t arrive till 6:00; we were a little worried by then.) It was a shock to see the airport parking lot simply filled with cars, left hastily where they’re not usually parked. Couldn’t help thinking of stories of cars abandoned at the Léo-Brazza ferry dock at the time of independence. Were people abandoning their cars now and leaving Coq? Inside the waiting room was full of people. Why? No particular reason, I guess, except that two Air Congo planes took off for Léo within half an hour of each other. Rumors and incipient panic are in the air.

The Andrés were there because that afternoon Benoit, age 11, left Coq to seek his fortune in the world. He flew alone to Léo and was met there by an André friend who put him on a night flight to Brussels. He starts school Tuesday. He was dressed in a charcoal gray flannel suit with short pants that exposed most of his thighs, a tie, and a white shirt. (He would not take off the flannel coat, even though it was hot, because everyone would see the spots on his shirt.)

When Tom and I arrived Thérèse and Benoit were discussing his stopover in Athens. She said he must look for the “Acropole qui est très visible de l’air,” that he must buy some postcards to send everyone in Coq. He wondered: Would Belgian money buy him postcards? Would he have to change it into drachmas? I asked Madison (who always carries “green”) to give Benoit a dollar for postcards. “This is good anywhere in the world,” we told him. He stared at the dollar. A whole dollar. It was evidently just the thing to give him.

Benoit seemed both excited and sad to be going. But he didn’t cry. “I have the feeling he won’t spend that dollar,” said Thérèse. If it means something to him, I hope he doesn’t. He can keep it safe and take it out to impress his friends and to admire and comfort himself with when he feels little and lonely. After all, you are quite a man with a whole dollar of your own! 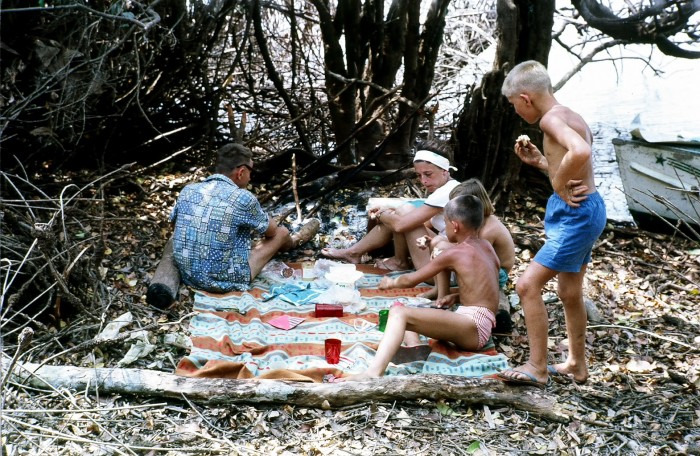 Thursday night Col Raudstein, the US military attaché, wanted to see Major Kwima so I hunted him up out at the Wangata Military Camp. (The Foreign Service is really an errand boy’s métier in spats and tails. The more successful you become the more delicate and complicated the errands, but they never stop being errands.) When I took Raudstein to the camp, we were led into a meeting including all the bigwigs in town, plus a stellar attraction, the ANC commander responsible for the mess in Lisala.

As I fed him a word or two of French when he faltered, Raudstein tried to convince these guys that there were enough men and equipment to hold out against an attacking force, particularly if an army coming up from Ikela were cut off from the ferry at Ingende. They couldn’t get it through their skulls. Numbers seemed the only thing that mattered – and reinforcements and complicated machinery. As the meeting progressed, the Lisala commander kept breaking in in Lingala to undermine what Raudstein and I were trying to say.

Raudstein told his new assistant that what he’d learned in the Congo was “patience and prejudice.” I agree that you learn something about patience. To me “prejudice” as he meant it is a stupid reaction to what one sees here. I came away from the meeting quite depressed with what seems the inevitable loss of Coq. But you can’t blame the Congolese. They live in a spirit-filled world incomprehensible to us. They talk in good faith about “fighting to the death” and they mean it, I think, when they say it – until the first bullet flies over their heads. Then it’s something else again. Sometimes you come away thinking: “Hell, let’s give it to the Chinese to see what they can make of it.”

Working hard and fast yesterday (Friday) we put out a report of findings of the attachés. We were able to tell the local population (1) that there were no rebels in the province, none at Lisala, none coming toward Ikela; (2) that there were probably no Chinese with the jeunesse elements that defeated a squad of ANC 15 kms northwest of Opala in Haut Congo (Stanleyville) province early in the week; (3) that there were enough supplies and men to defend Coq against rebel attack if (a big if) there was the will on the part of the Army and the population to do it; (4) that there were several strategic points of defense in the province; (5) that fleeing and pillaging ANC were being disarmed and sent to the Army camp at Irebu where they could do no more harm to the local population.

We heard the news last night that govt troops had staged an attack against Kindu in the west Kivu [in the eastern Congo]. ANC counterattacks in the Kivu will force regroupings of rebel troops, we assume. Thus, rebel pressure seems off us for an indefinite period of time. Where Wednesday evening I was planning to be evacuated in ten days and Thursday evening was depressed after witnessing the panic of the bigwigs, I’m now expecting to finish my tour in Coq.

That’s not to suggest, however, that the local situation is calm. Anything but. And I can’t tell you how thoroughly I’m looking forward to getting some relief from this in Europe. And seeing you. I leave here in 14 or 15 days….

Next post: The Situation gets worse – or at least it seems to.