Wednesday there seemed no reason for a precipitate departure. That evening some packing for the C-130 scheduled to take out some of our belongings. I also wanted to write down a log of what has been happening. But too tired. Despite lack of physical activity came home feeling bushed. Up Thursday morning at 4:30 to write log-letter.

Thursday morning. Nothing pressing at the office and I suggest to Tom that I go pack since we are thinking in terms of living out of suitcases. I get Joseph out of the house, asking him to wash the car, and work leisurely, cleaning out the upstairs bedroom I’ve used as a storeroom.

I find Thérèse outside the André office as I am putting the typewriter in the car. She tells me that she passed by the Duriers the previous evening and stayed a moment. Coopmans also there. They all asked her if the Americans were planning to leave. She hesitates. What can she say? But she has always proved an accomplished evader of direct questions and she tells them: “You can’t imagine the amount of stuff Americans bring to a place like Coq.” And it is true that she has been flabbergasted at all the junk that Sally has. “They are getting out some of their excess,” she explains. She laughs to me, pleased at this cunning evasion.

Packing finished, I do some errands. Stop at the Commisariat de Roulage to straighten out a traffic ticket. At Bogaerts to order a new tire for the car (the spare is no longer good). Over to missionary Ruth Reed’s to pick up eggs for Thérèse and me. In her magasin Ruth puts her entire collection of eggs into a large basket. “Give these all to Mme André,” she says.

“Are you leaving today?” I ask, amazed. This is the first I’ve heard of it.

“I heard everyone was leaving today,” says she.

I go down to the center. Engulu, finally returned from Léo, is in the office. Tom stands at the door of the radio room. I ask him: “Are we leaving today?” He begins to explain. But this is no time for explanation; I ask only for the order. He says that Engulu sees no possibility of defending Coq. Tom has called for a C-130. The plane will be in at 2:30. Things are in a high state of nervousness.

I zoom out to see Thérèse and Jules. Break the news to Thérèse. Jules is off in the chantier trying to fix the dredger half-sunk in sand. I give Thérèse the eggs and tell her that she and the children can accompany us to Léo on this evacuation flight if she wishes. Momentarily she’s caught up in the temptation. “No, if I start running, I will never stop,” she says. I know exactly what she means.

Leaving, I pass our man Raphael who has a note for Thérèse from Sally. I take the note to her; it asks her to come immediately to the Madisons. Thérèse offers to explain to Joseph in Lingala that I must leave, but first she will pack a valise; I’ve offered to carry it down to Léo.

Go out to see Jules at the dredger. He has filthy hands and offers me his wrist to shake. I tell him that Tom has ordered our evacuation. “This is a mistake,” he says. “The Congolese will think you’re abandoning them.” He asks me to come for lunch if there is time. I ask him to come to the airport.

At the house I start Joseph wrapping the dishware. I pack suitcases. Thérèse arrives with the footlocker for the Andrés’ pied-a-terre in Leo. In sort of typical André style only one of the two hasps works. But bound with filament tape the footlocker stays closed. Thérèse explains all to Joseph and I give him a month’s salary (CF 2500), the ticket for the bike tires I’ve ordered for him from Bouks (due in the end of July, they have not yet arrived) and some old clothes. Thérèse goes to help Sally.

I finish packing by 12:30 and return to the office to pay the boys. We’ve told them to stay through the lunch hour, but two have gone. Pay Ahenga Raphael and Edouard, making petty cash receipts for each. Pay each two periods in advance.

Pass by the Madisons to pick up a sandwich and rendezvous with Tom before going to the airport. Everything is more or less chaos chez les M. Thérèse is the only person working in an organized, nerveless fashion. Tom screams at everyone. Sally is packing as she did last Monday when the place was a mess, her houseboys running every which way trying to get things done. Once again she has thrown everything all over the living room. She’s indulging an innate sense of drama. No wonder the boys are upset, scared, panicky; they take their cue from her. I get instructions and zip out to the airport. The plane – a Hercules C-130 – roars over just as I am leaving the Madisons. 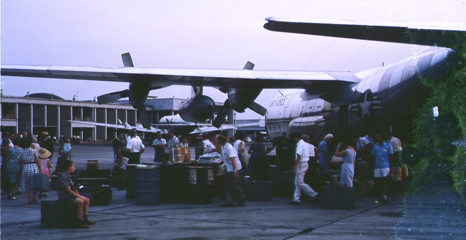 Ndjili airport, Leopoldville, after the evacuation

Out at the airport the crew wonders what is happening. They’ve been deflected from a flight going from Katanga into Luluabourg to come get us. How many people? Who will they be? What’s the local military situation? I can’t answer this last. The only report I’ve heard all morning is that eight truckloads of rebels passed Mondombe earlier in the day. There’s also been talk of rebels only a little east of Boende.

Go back to the Madisons. Tom has returned to the Center. Sally asks me to boost his morale, to reassure him he’s done the right thing. In deciding earlier in the day not to question his decisions (a superior deserves at least that much support from an underling in a crisis), I’ve suspended my sense of analysis. At the center we are still trying to pay the boys. My job. Tom collects our pertinent files.

Everyone being paid, there is nothing more to do at the office. I take the truck and get my stuff out to the field and loaded onto the C-130. Missionaries begin to arrive. I talk to Betty Erlewine, asking if DCCM leader Dick Taylor and the other men have decided to go. She doesn’t know; it’s still up in the air.

Back in town we finally get the Madisons organized. Both the André pick-up and the Center Power Wagon are loaded to the gills with tiny boxes of God only knows what, every conceivable thing. It seems strange that, coupled with this hurried decision to evacuate, there should be this unwillingness to leave the tiniest thing behind. If we are really so concerned about the burden of the American lives that hangs so heavily on us in our unwonted consular function, why are we so concerned about saving plastic plates? Why so preoccupied with sending out the center equipment? The Ambassador himself has said, “Screw the equipment!”

Sally emerges. My god! She’s dressed to call on an Ambassador’s wife. She’s in one of those girlish frocks. Bien coiffed. The switch that’s peryoxide-streaked just like her own hair rests on her head like a crown. The wrinkles that made her look so overcome by events yesterday are under control; she’s taken ten years off her age. Fresh lipstick. Even the goddamned green mascara. What is this: an evacuation or a social occasion? Next to her Thérèse looks tired, worried. Who has really done the packing?

“Sally,” I tell her, “I have never seen anyone looking so nice for an evacuation!” Shame on me! But I don’t approve of anyone looking so modish in a crisis. If her husband really needs assurance that we are leaving A Dangerous Situation, why does she look like something out of Vogue? (That’s probably why he loves her. Perhaps that’s reassurance he really needs.) As my irony-edged compliment reaches her, Sally turns on her high heels and her face lights up with such pleasure at what she, a woman (almost 50), can still do to a man (hardly 30). How can you disapprove, even in a crisis, of someone as easy to make happy as that?

We begin to get people and their belongings onto the plane. DeChalan from the Hévea plantation in Bikoro has a Dutch woman with an injured leg and an infant he wants sent out. He also gives me a letter urging light plane evacuation of the other women in Bikoro. The Hobgoods and a British family of four come in on the Basankusu plane and evacuate with us. Will Dick Taylor go? I’m concerned that if he doesn’t, Tom won’t and Sally in her turn will refuse to go. Is it that Sally refuses to leave without Tom? Or that Tom won’t stay without Sally? Dick’s aware of this; I’ve made sure he is. Fortunately, everyone is to go.

Jules André is nowhere to be found. I go search for him. The waiting room is as crowded as it was the afternoon Benoit left. Two planes come in this afternoon. A concerned-looking Herman [the Center’s landlord, an early critic of US presence in Coq] calls to me, his disapproval obvious on his face. I can’t find Jules anywhere. I say hello to the taciturn Houzé. “Vous partez?” he asks me. “Oui.” We say nothing more. His expression hardly changes, and he does not even look at me so much as at the huge plane out on the field. It’s big enough to put a house inside.

Still that small exchange makes me realize what the Europeans will think: that we’ve fled. (I feel that is what Houzé would call it). Unable to find Jules, I seek out Herman. He’s concerned about his building and I explain the set-up to him: Rent continues as usual, Edouard has the keys, we will correspond with him, when necessary, through regular channels until they are cut off, then through his bank. Tom went over this with me earlier in the day, wanting to push the Herman visit off on me. Herman tells me, “There are 100 women and children who should be gotten out of here.” He’s obviously concerned about his wife and children. He says that Jules has gone into town to write a letter to the Belgian Embassy seeking evacuation facilities for Belgians. He does not return before the plane leaves.

The flight down was no sweat, about an hour and a half. Hank Clifford, branch post coordinator, USIS Admin officer Charlotte Loris and Mowinckel’s secretary Marge Eckels met us at the plane. I’m staying at a basement apartment at the Cliffords; they are three weeks away from leaving, their tour finished. Thye’ve just had their sixth child. Dinner Thursday night with them, the new BPAO in Eville Ralph Smith and two contract English teachers whose courses with the ANC were recently cancelled.

Early to bed to read my mail and get some sleep. It’s been arranged that I will fly north the next day, first, to Gemena and then back to Coq to help evacuate refugees. If you are a good boy, you get to evacuate twice.

Next post: Fred flies the next day to evacuate missionaries from Gemena and friends from Coquilhatville.