Fred’s allowed to return to Coq. Is this wisdom? Or folly?

Dinner with Thérèse and a whiny Martine. Thérèse orders her an avocado and a Pepsi and Martine is momentarily happy, smiling, looking about her, her legs dangling from the restaurant chair. When her order comes, she grins and her eyes seem as big as the avocado itself. Contentedly she begins to spread the avocado onto a piece of bread; she sips at her Pepsi with a flirtatious smile. But before we adults have finished, she is wiggly and tired. Half the avocado lies untouched on her plate.

Thérèse has had to speak to her: “Sois sage, ma fille-fille. Viens, ma poulette, sois sage pour Maman.” Twice Martine’s face has crumbled at these encouragements; she’s looked down into her lap and dissolved into tears. Poor little kid. It’s terrible to watch. There’s no frustration, no fight, in her tears. They’re abject, worn-out beyond fighting. It’s worse for her now that her brothers have gone to school. Sometimes she plays with little girls she doesn’t know or goes to the hotel rooms of other refugees from Coq or gets dragged along on errands. 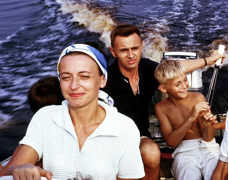 It’s been hard on Thérèse, too. Late one afternoon I passed by to say hello. Martine answered the door. There was no light on inside. Thérèse was sitting beside the tape recorder, listening to music, staring into the darkness. I’d never seen her this way before: depressed, worrying, wondering if Jules is all right, if Coq is safe, wondering what will become of them and of all they’ve tried to do in the Congo. She and the kids were not sleeping well. They’d brought no blankets and after Coq Léo seems chilly at night.

In addition, Thérèse has had headaches. I’ve dropped in several times without realizing about them. She always dissembles so well. That afternoon after I came in, she perked up, turned on the lights, gave me a cup of tea. As we drank the tea, she showed me once more the snapshots of the house and the kids in Namur.

At times my relationship with Thérèse gets a little confused. It’s something we’re both aware of, something both of us control. But still it’s there. Often I’m grateful for Martine’s presence. I know what I was able to do for the Andrés has meant a great, great deal. I just wish Jules could have shared in it. And I wish this other didn’t intrude.

But now, in the restaurant, despite Martine, Thérèse is in good form, pleased I’m going back to Coq. Happy that I’m getting the chance so many of their friends in ‘60 did not get: of proving myself (even if only to myself). I tell her of my concern that I will be in Coq when Tootie thinks me safe in Europe. She smiles and cocks her head. “As Jules’ mother says: ‘It causes me worry, but I’m glad to have sons like that.’” She gives me a letter for Jules asking for his approval, she tells me, of her plan to return to Coq on Friday.

Back at the Cliffords where I’m staying in the basement apartment, Hank follows me downstairs. I’ve just said goodnight and thanked him and Bea for their hospitality to a refugee under the perplexing circumstances of their sixth baby’s arrival and their efforts to pack effects to return to the States. Hank wants to discuss my efficiency rating. He had the task of reviewing Tom’s report and has apparently toned down Tom’s enthusiasm. He’s suggested that the Agency may want to wait another year before giving me what I consider a virtually automatic promotion. Typical Clifford. Always a friendly insertion of the knife. He asks for my comments. I make a couple of hesitant, careful beginnings. He squashes them immediately and I let it go at that.

Absolutely horrible night. Most discouraged by the interview with Hank. What does one have to do to get ahead in this accursed Agency? I’ve just talked my way into risking my life for the damn outfit only to be told I may have to wait a year for promotion. I try to think well of Hank. Not easy. By the time I’ve finished packing, I’m thinking of other things.

Still a horrible night. No water in the apartment’s cold water bathroom. The alarm clock clicks like a metronome in an echo chamber. There’s still a whisper of it after I’ve set it on the stairs leading to the bathroom. The baby who, Hank says, is “already sleeping clear through till morning” cries sporadically through the night. This cruelty to the newborn seems of a piece with telling me I’m not yet fit for promotion. Who the hell has six kids these days? I do pushups to tire my body and bring sleep.

Whereas I didn’t think I could live with the sense of disgrace this morning, now I can’t rest because of fear. What if I get caught in Coq by the rebels? What if I’m held hostage like those five guys in Stanleyville? No word has been heard from them for weeks. The fear is like a heavy weight along my back. I’m concerned that the family should think me in Europe. I want to feel the support of their thoughts. I pray, reciting quotations I’ve known since I was a child. At times it seems like a trance. Repeating quotations, I sink into slumber, then I’m jarred from it by the feeling that I must continue the repetitions. I’m up before the alarm clock, feeling better in the gray, beginning light of dawn. No sweat. I’m looking forward to getting back to Coq. Wonder at what it was inside myself that caused the emotional gymnastics in the dark. Maybe it’s partly Léo. I haven’t slept calmly since I arrived.

[Reading these notes 45 years after the events, I have complex reactions: That, on the one hand, we did leave Coq too early. But that, on the other, risking our necks in a Congo that was just beginning its long slide into chaos would have been extraordinarily foolish. That a guy has to regard machismo as valid because it may mark his reputation. But that it, too, is very foolish. That Tom Madison showed extraordinary grace in not throttling me. (However, one evening over dinner when Sally’d had too much to drink, she grew very ugly in her denunciations of me.) That the young officer portrayed here – me – was both a laudable example of American idealism and an incredible pain in the ass.]

What was Donanne doing at this time? Having returned from a summer with her parents at their Foreign Service posts in Cambodia and Malaysia, Donanne arrived at UCLA to begin a year-long master’s degree course in Library Science.

Next post: Fred manages to return to Coq. But is it too late to do any good?