Following an evacuation from the USIS post in Coquilhatville in the northwest Congo, Fred Hunter agitated to return. The embassy finally agreed that he could go back. Here’s his account of what happened when he did:

A long low flight to Coq. Besides Maj. Kohlbrand, the Assistant Army Attaché, and his crewman, we are three: an Embassy political officer, the Léo-based manager of Sédec stores, and me. The Sédec man has very kindly agreed to instruct his people that I’m to have a space on a steamboat they’ve got hidden on the river as a means of escape if the airport gets cut off. If that happens, the river will be the only way out.

Arriving at Coq in Bugsmasher [the embassy’s military attaché plane] we are met on the tarmac by Finance Minister Efambe and other provincial officials, decked out in the garb of their officialdom: dark suits and ties. (Highly placed provincial civil servants are the only people in town who wear ties; ministers the only ones who wear coats.) They have come to greet President Engulu [the provincial governor]. When Efambe realizes that Engulu has once more decided to stay in Leopoldville, a sour look of abandonment spreads across his face. He and the officials leave abruptly.

We are alone now on the tarmac. In the shade of the airport terrace, however, about one hundred yards away, a group of dejected Belgian men, former colons, watches us. They know of our arrival through the Sédec radio net. Examining the group I see that the entire Lions Club seems to be there – except my great friend Jules André. The men speak hardly at all among themselves. The commercial confidence of their earlier reactions to the rebel advance (“Rebels have to eat and buy just like everyone else, don’t they?”) has disappeared. Now their faces are worried, understandably since the rebels keep advancing on Coq and many of their fellow Belgians have already fled. We leave the plane and start toward them. They do not move. They scrutinize us. They stand alone or in pairs, watching us as – it seems to me now – they have watched all American activity since I arrived in Coq not quite a year ago. With neither affection nor open hostility.

Now a figure breaks and moves quickly toward us. Monsieur DeWalsch, conseiller technique to the Provincial President. I have never known him well, but have always liked him. His red hair and ruddy Flemish face shine in the sun as he approaches, his squat frame carried along on an activist’s stride, clad as usual in white: shirt, shorts, knee-socks. A smile bursts through his concern as he greets us with an outstretched hand. 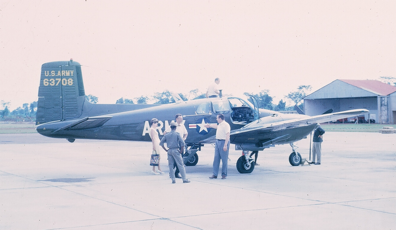 He gives us the news. Rebels now hold the riverbank across from Boende [a long day’s drive to the east]. The ANC has retreated into the town itself. It offered no resistance along the dike road leading through the swamps to the Boende ferry landing. The town is besieged. There’s no will to defend it. By now it has probably fallen.

The Ruki ferry crossing at Ingende lies only seven hours drive from Boende. Once across the Ruki, the rebels can reach Coq in three hours, Coq which is growing ever riper for change. The road is good. The ANC checkpoint at Kalamba will mean nothing.

The place to mount a defense of Coq is at the ferry crossing at Ingende. The gendarmerie has been assigned this position. Can it hold there? Does it have proper arms? Fortunately, a Belgian will have command, the technical adviser Marcus, who with his wife has often swum laps beside me in the pool at dusk. His top assistant will be the only Congolese who seemed tough and unafraid among the frightened men at Efambe’s war council.

If the rebels cross the Ruki at Ingende and head north, they will control the only land escape from Coq. So the important questions are these: Will Coq’s ANC garrison try to hold the road? Will it make a stand at the Wangata Army Camp just outside town? Once in town the rebels can quickly cut off escape by Otraco, the Congo River shipping line. And by air. They’ll place barricades across the long spur of road leading to the airport and oil drums on the strip. That leaves the alternative of staying in Coq or escaping in small boats on the river.

Thus the worried men on the airport terrace.

Next post: Is the local ANC commander competent? Is he loyal?

Respected readers:
You’ll notice something new at the top of the website; a place to subscribe to TIA. About time, you may think. We’ve only been at this almost a year. Happy to welcome you on the travels!