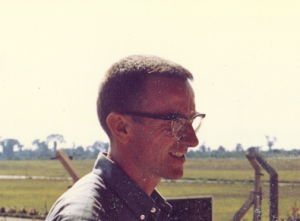 Fred Hunter at the Coquilhatville airport

When I arrive at the Center, I see that the boys yanked the letters of our sign out, tore chunks of plaster from the wall. Before going in, I assume a disgusted expression. My real reaction, though, is resignation. I psych myself up to enter, wondering what my reception will be.

Inside I greet the boys. Even before I appeared outside they knew I was in town; Africans seem always to know such things. N’Djoku, Edouard and several library clients watch me enter. Ahenga sits tensely in studied idleness at the check-out desk. We shake hands all around, but without friendship. After my performance before the facade, the greetings are sullen. I go into my routine of displeasure, asking, “Where are the letters?” The others watch as Edouard shows them to me stacked in a heap in that junkhouse storeroom across from the radio shack. Obviously nothing can be done with them now. One is broken. Screws writhe at the ends of them. The plastic dowlings that held them from the wall have been lost.

Looking at Ahenga, I hardly recognize the face of this man whom I first refused a job because his obsequiousness made my flesh creep. He tells me with his look that I am his enemy. His face contorts with hatred. “The day after you left,” he cries excitedly, “we were threatened. They said, ‘When the rebels come, you will be the first to be killed.’”

The others corroborate this, all talking at once. I believe them. We’ve known all along that dissident elements were operating in Coq. The day after we evacuated, Radio Stan congratulated Coq for “ridding itself of the Americans.” That means organized rebels with communications equipment.

There’s no point in pursuing this with them. Was there any point, I wonder, in showing my displeasure? I do, after all, sympathize with their reaction. Still there seems some obligation, as long as one’s working with these people, to insist on disciplined reactions. So that someday they will unscrew the letters instead of simply ripping them off.

But none of that seems to matter now with the rebels in Boende.

I tell Edouard to watch the library and invite the others into the office. There I try to calm their fears. I remind them that we have never asked them to endanger themselves by staying at the Center. If the danger required removing the letters, then that was more danger than we wanted them to be in. They have no loyalty to the United States beyond that of their jobs; that does not include physical danger. I suggest they answer threats by saying: “I work for the Americans because they pay me. If you pay me, I’ll work for you.” They’re mollified by the prospect of my being around to make decisions for them and become the focus of anti-American feeling.

After our little meeting I look around to see what other changes have been made. The air-conditioner is operating at high, and I’m about to freeze. Ahenga has taken the Director’s chair and N’Djoku mine. While I go over property inventory, Ahenga sits at his desk and busily reads the brochure on American aid to the Congo. I regard him with amusement and affection; at least he is trying. I realize that this is what it must have been like in 1960. Congolese found themselves sitting in the Belgians’ chairs – without the slightest idea of what to do. There has been an increase in outward symbols of authority: a confusion of ill-lettered and unnecessary announcements now block the windows in the door. N’Djoku has resumed morning film showings and has transferred the projector to the theater itself. In view of the 3:00 pm curfew, the boys have in a happy wedding of convenience and wisdom begun closing the Center at 2:30. Edouard has moved his family from the boyerie to the communes. So it goes.

I return from the Cultural Center to the André house and take my suitcase upstairs. Last Thursday’s mess lies untouched in my bedroom. Again this feeling of stepping back into an historical still life. Armoire doors hang open. A fistful of spare keys lies spread out across the dressing table. The cabinet seems quite empty without Notre Dame de la Toilette, the Memling madonna who has watched with dignity over the tiny toilet cell and the one in my apartment in Brussels. I miss her now, but she could not have been left behind.

I pull the sheets from my suitcase and make the bed. The armoire’s state of nakedness tempts me to settle in: its empty shelves, unused hangers, abandoned plastic bags. But is there any real reason to unpack?

From the bedroom window I look down at the town. How can one guess what’s going to happen here? Coq never gives hints of its mood. Its face never changes. On the surface it’s always only what it seems: a swamp town, a tiny toe-hold of man-things in the jungle, broiling in the sun. At its center, along the river, lies an unfocused scattering of corrugated roofs and white-washed walls: the European houses. Behind them stretch palm-thatch roofs and mud-and-wattle walls: the close-packed cité huts. Below me, across the unrealized concept of a central square, drifts a woman wrapped in swirls of cloth. She carries a carton of bread loaves on her head. She wanders soundlessly across the emptiness, hardly moving at all. Motion does not seem part of life here.

Man seems insignificant in the unchanging landscape: the water, the jungle and the sky. So does noise. The tangle of vegetation absorbs all sound. All morning I’ve been trying to gauge the feeling of the town, but I cannot. This eternal inactivity, this insignificance of man, and the tenuousness of his hold here: these make it impossible to believe that danger is coming. Yet in the week I’ve been gone something has changed. Something has happened. A week ago Congolese sentiment was confused, unformed; it was looking for signals, seeking a direction. I feel now – without being able to say why – that it’s found its alignment. It has moved to the side of the rebels.

What part did our evacuation play in this? It was undoubtedly one of the hand-lines used to read the future.

Nothing has changed on the surface, but this change of sentiment has created a new atmosphere. Rebel sympathizers can surface now. They can threaten our employees at the Center and other Congolese with reprisals. They can bribe or threaten or undermine what’s left of the shaky will of the Army. They can organize, enlist and train cadres. It’s an atmosphere in which that local combustion which we have so long talked about and feared, which has so long been a question mark in our planning, might actually take place. If it did, it would bring danger – possibly death – to non-rebel sympathizers. And if it turned racist or anti-American, to me as well.

I decide not to unpack my bag.

#1: A recent post referred a Coq government official Finance Minister Efambe. TIA received this comment from Paul Efambe y’Olenga:
“Dear Sir, very interesting story! i am his son and i was 1 month away from being born after my parents fled coq!
“Strange!
“p”
Mr. Efambe: Mbote! What a thrill to learn that you read TIA!

#2: Michael Hoyt, the American officer trapped in Stanleyville while I was stationed in Coq, reads these posts. He’s asked that I be more specific about dates. So let me explain what you’re reading and when it was written.

TIA’s pre-evacuation accounts all come from a letter written over several days. It was started in Coq on Wednesday, September 2, 1964, and runs for five pages single spaced. Then it breaks off at the bottom of page five, mid-sentence. The next page is dated Leo, Sunday, 6 September. It suggests that we evacuated Coq Thursday, September 3, 1964. The letter continues: “”Well, now it’s Monday evening and I’m really pretty sick of thinking about all this.”

The posts about the return to Coq come from a document – undated, alas! – titled “MORE NOTES ON THE SECOND EVACUATION FROM COQ.” It runs about 17 single-spaced pages and includes remembered dialogue. I returned to Coq Tuesday 9/8/64 or Wednesday 9/9/64.

These evacuations were a Big Deal for me. That’s why the enormous effort to get down all the details. Happily, TIA gives me a chance to share them. I assume I wrote the notes while in Leo before going to Europe. The next letter in the notebook is dated Brussels, Friday, 18 Sep 64, and I seem already to have spent most of a week in Paris.