Following a precipitate evacuation from the USIS post in Coquilhatville in the northwest Congo, Fred Hunter agitated to return. The embassy finally agreed that he could go back. Here’s his further account of what happened when he did:

Now that the US embassy plane has landed, ANC Major Kwima, commander of the local garrison, comes out to the tarmac to join our talk of Boende. As usual his clothes are so much too big for him that his slight frame seems to float inside them. His face is unlined except from petulance and tattoos. He looks no more than sixteen. There is something about him, more dangerous than simple incompetence, that has grown ever more wild and violent as the rebels have advanced. This quality – what is it? – has made Tom and me tag him “the juvenile delinquent.”

Major Kohlbrand, now finished sizing-up Kwima, looks amused, as if he does not quite believe his eyes. Nonetheless, he agrees to include him on the reconnaissance flight over Boende that he and DeWalsch have just arranged. How will Kwima act, I wonder, under attack? He who has talked so easily of “jusqu’à la mort” – until death. Can Coq rely on him? President Engulu, for one, does not think so. He has tried to issue arms to Europeans. To a man they have refused to accept them. Even for a stand at the airport.

Coquilhatville from the Congo River

Clustered near the Sureté counter inside the airport building the men of the Lions Club – minus Jules – crowd around us, full of questions. Why such inaction from Léo? Does it know what’s happening in the Equateur? Does the Embassy know? Does Bomboko? Will mercenaries come? Where is Engulu? What will the Embassy do about evacuating Belgians?

Five days ago when Jules informed these same men that a C-130 would be available, the answer was always the same: “There is no question, M. André, of my leaving Coq.” The threat to Boende has worked its change.

The Lions turn their attention to the man from the Sédec grocery chain, seeking one of their own nationality. Nearby Maître Herman wanders a bit, hands in pockets. He advances and attaches himself to me, of whom he was so distrustful when I first arrived (although, of course, he was happy to take rent from the Americans). As Jules has noted in a letter to Thérèse, part of which she read to me, Herman clings like a liana vine. He supports himself by holding onto something strong just as the liana attaches itself to jungle trees. A lawyer by profession, Herman has always struck me as too intelligent to cope with today’s Congo. He is not coping now. He stands fidgeting, the budding belly straining over his belt. His chubby gray face is full of concern. I do not like playing the tree to his vine, but pity proves stronger than irritation. The poor guy’s afraid. He has nothing to do. His wife and children have gone. He cannot practice law in a region rushing headlong into chaos. He wants desperately to leave. But he could not live with the disgrace of being the first Lion to go.

He fidgets next to me as I stand beside the typewriter, the cashbox and my suitcase. I feel terribly silly carrying them into this group of worried men and smile now to Herman to explain their presence. “I have come back to stay,” I tell him.

He is incredulous. “Mais comment?” he asks. “The rebels are at Boende.”

Only a few of us are left at the airport when the Sédec man leaves, siphoning off the majority of the Belgians. Herman offers me a ride into town in the car of his colleague Maître Cabiaux. They take me to the house and park before the gates next to Jules’ office. Even before getting out I can hear banging and Jules’ voice, life going on as usual behind the gates. Cabiaux honks. When the gate opens, Jules looks up from supervising a couple of his men. Great to see him again. He gives me a smile and comes forward, hand outstretched. “Allo, Fret,” he says in English. “Ow or you?”

During the troubles in 1960, as he has told me several times, Jules removed himself from the community, working by day in the courtyard, staying close to home at night. This, he says, is why he suffered so few annoyances and was able to stay on. I realize that he has begun to live the same way again when, after greeting me, I see him look distrustfully at Cabiaux and Herman. “At a time like this,” he says to them, “there are two good things: to have work and to have gates to work behind.” His tone is challenging, which is his way of answering criticisms. Having gotten his family to safety, he wants only to be left alone to hang on. 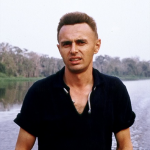 In the office, where Jules takes me after Herman and Cabiaux leave, he tells me that he will be returning to the river house shortly after noon. With typical generosity he assumes automatically that I will take my meals with him. Thus he does not bother to invite me. He gives me the keys to the house and my car, the latter of which I have already noticed parked as I left it in the courtyard. He gives me a little news of the Center. “Your boys took down the sign,” he says.

“Yes,” I nod. “Thérèse told me. She said I should be tough with them.”

Inside the house nothing has been touched. Returning is like stepping back into a stopped moment of time. A chair cushion is overturned. A book lies open on the lamptable. Someone’s ashes sit cold in the glass tray. The jars that Thérèse left for drinking glasses when I first moved in cluster on the dining table where they were when I told Joseph not to pack them. Some are still wrapped in newspaper. Strange to look into this mirror with its retained image of Thursday’s rush and disorganization.

“After you left,” Jules explains, seeing but misreading my reaction, “Thérèse was so tired from helping Sally that she did not clean up.” He shrugs. So no one has gone over the house with Joseph as I had hoped they would. I wonder if he has helped himself to any of the things the Andrés lent me. Jules confirms that he has found the radio about which he wrote Thérèse in Léo, then leaves saying he will see me at lunch. The two books I have marked for return to the Catholic Mission’s Library (Hoelstaert’s collection of Mongo folk sayings and the pamphlet “La Philosophie Bantoue”) still sit on the sideboard. I cannot, however, find Epitaphe pour un Ennemi about which Thérèse had so often raved that I was finally persuaded to borrow it.

In the kitchen Joseph has cleared out the refrigerator. That was expected. Looking at its empty shelves I remember wolfing down the crêpes he prepared the last day (he was proud of – and I complimented him on – his initiative). He’s made off with the water filter. That’s a surprise. On the shelf remains Thérèse’s brown teapot out of which I had my morning Kivu tea (instant coffee being hard to find and therefore saved for guests). Beside it lies the tiny passe-thé to strain out the tea leaves. I’m relieved to see these André possessions, especially after noticing Thérèse in Léo serving tea boiled in a sauce pan and passing it through a spaghetti strainer. Two of the lamps I balked at letting Sally Madison pack still stand in the living room. A year’s supply of toilet paper sits on the alcove bed. It never got packed.

At the UN HQ World Health doctors called in from the bush are playing ping-pong in the lounge. Rishi and Samy are in the little PX (this is the first time I’ve ever seen it), leaning on its counters for all the world like a couple of Indian merchants. They seem the same as always, unconcerned by The Situation, even by the threat to Boende. Rishi does wonder how he’s going to evacuate the last of the UN trucks with rumors floating around that Otraco may no longer accept cargo. As for himself and Samy and the doctors? He’s waiting for radio instructions from Léo. It’s reassuring – almost amusingly so – to see this calm.

At the Center “taken down the sign” seems hardly an adequate description of what has happened, judging from the wall above the facade. It’s a mess. With a little patience and control the boys could have unscrewed the individual letters. Instead they yanked them out. Chunks of plaster were torn from the wall. It looks bullet-spattered. The paint is gashed and scarred. Before going in I take a long look and assume a consciously disgusted expression, although my real reaction is resignation. This is undoubtedly a negative approach, criticizing the locals even before seeing them, but I’m most unhappy with what I see.

Even when it’s in full operation, this little Center is largely a symbol. Without officer supervision, that’s all it is: a symbol of America, of America’s link with Africa, of American encouragement of and involvement in Congolese striving for stability, development, nationhood and broadened contacts with the world. Maybe if we had simply closed the Center and left, it would still symbolize those things.

I psych myself up to go inside, wondering what my reception will be.

Next post: A change of sentiment in Coq. The town now seems pro-rebel.