Having put in a good morning’s work, Jules is pleased at lunch. With himself. With the presence of company. With having shown Cabiaux and Herman that he was working while they were worrying. “What’s Fret going to drink?” he asks as I come in. “Un petit whiskey?”

“Un petit gin-tonic Michejda,” I answer. It’s my usual request, a code phrase devised by the now-departed Polish Dr. Michejda who was uncomfortable having someone ask for a soft drink in his house.

Jules pours “un petit whiskey” and sets it before me. Then he brings my usual Pepsi-Cola and with a playful smile takes the little whiskey for himself and raises it to me. “A votre santé, Fret.”

Jules, who loves his tranquility, settles into his chair. Ah! He has been savoring the life he can now permit himself to lead. Thérèse and the children are safe. They have been away so short a time that their absence is still a vacation. A bachelor now, Jules is more talkative than usual. He thanks me again for the color film I gave him just before evacuating. As a surprise for Thérèse, he has spent one long evening photographing her paintings. It was obviously fun for him, the camera challenging his technical side, the task allowing him to be with her even while she was gone. He recounts it now in a rush of words and gestures. He shows me the camera, the settings he used, where he placed the paintings, how he lit them, even how and where he stood to press the shutter.

“When I think of the progress Thérèse has made,” I say, ‘it’s really amazing.”

He mutters his agreement, still the technician absorbed in the mechanism of the camera.

I’m amused because we’re talking about different things. I’m thinking of Thérèse’s progress in technique, progress that extends from those crude Bikoro sketches that Ron Sallade and I shook our heads about to the oil that somehow for me caught the real essence of Coq. For Jules it all seems largely something technical, a record for a record’s sake, like a secretary’s fascination with orderly files. Then he looks up from the camera. “I wanted to have a record of it,” he says and I realize he is preserving something he has seen in a Thérèse I’ll never know.

Loka, the only houseboy now, serves lunch and disappears, leaving dinner on the stove. We go to the table. “Your place has been changed,” Jules notes and I take Thérèse’s usual place facing the windows. We talk of the river. And of the dredge which scoops sand from the river shallows for the bricks that Jules and Pierre Bogaerts manufacture. It is working again. We touch on the news, but veer away from it quickly. Its presence casts a heaviness over the meal. Underneath his surface ebullience – which he tries to maintain – Jules is much concerned. At one point he says: “You know, Fret, if things turn out badly, there is a place for you in the canot.”

“What would I have ever done in the Congo,” I ask, “without you Andrés to get me out of trouble?” We laugh. It is so true! 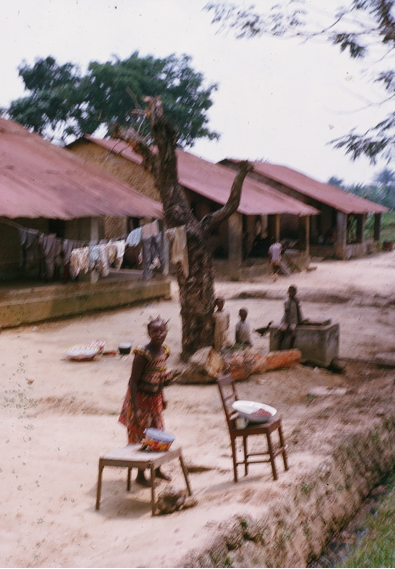 A scene in the Coq cités

Later, he mentions again how good it is to have work and gates to work behind. “In 1960,” he tells me once more, “while the others were sitting in bars and running from house to house, I worked and stayed out of sight.”

We fall silent for a time. Jules sits sideways in his chair and follows my eyes out onto the river. It is gray this afternoon under the darkening clouds that gather and drift on now that the rainy season has started. A file of water hyacinth clumps moves by, then a huge mass of them, almost a floating island. We discuss its size and fall silent again.

Finally Jules asks: “Could I send out some of Thérèse’s paintings when the plane that brought you goes back to Leo?”

Of course, I agree. The plane should be returning soon from Boende and will go on almost immediately to Léo. “We can address the package to Madison.”

“Of all the things we have here,” he answers looking around at what there is after a dozen years in the Congo, “those are, I think, what she’d most hate to lose.”

Jules hurries off to choose and wrap the paintings of Thérese he wants sent to Léo on the attache plane. I return to the Center where it is less than 45 minutes before the 2:30 closing hour. The boys and I review the disposition of expensive items of equipment. The stove that arrived for my house remains in the storage garage. Ahenga and N’Djoku have each taken one of the newly-arrived air-conditioners to their homes for “safe-keeping.” (To what extent has our influence made possible this fine example of grass roots democracy?) I tell the boys that the air-conditioners must be back tomorrow. If things grow worse, we will try to send them out via Otraco.

Instruction from Sally Madison: hunt for “an intimate item.” On the way to the airport, I stop by the Madisons’ house to check on things and to undertake the search. (After a year of down-to-earth living in the Congo, “an intimate item” seems a strange name for what Tom explained was a missing brassiere.) As usual Louis greets me, all smiles. He hurries over the gravel on bare feet to unlock the gate, as if my honk had catapulted him out of the kitchen. “Oui, Monsieur,” he grins, “tout va bien.” The house is clean and in good order. But, alas! I cannot find the intimate item. If it was actually forgotten (it would seem to be about the only thing that was), Louis’s woman is now strutting around with it in the market.