Following a precipitate evacuation from the USIS post in the northwest Congo, ordered by his superior, Fred Hunter was allowed to return. After a day and night back in the town, he found the situation much deteriorated. Here’s his account:

Dawn wakes me. Light shimmers in the room. There’s a moment of struggle to keep my slumber, a moment of savored semi-consciousness. Then my elbow pushes me toward wakefulness, lifts me off the bed and above the brink of the windowsill. The sun, just above the trees on the eastern horizon, is like a white disc standing on its edge. The morning is as crisp as chilled papaya. There is no sound. Nothing stirs on the square. It’s before 6:00. I lie back down.

When I wake again and shave and dress, the square has begun its morning life. A cluster of Congolese loiters on the terrace that jointly serves Schambourg’s bakery and the coffee shop next door. Women drift toward me carrying on their heads cardboard cartons filled at the bakery, bread for the cité markets. Clerks move toward their jobs, some of them on bicycles. They pedal slowly, conversing with friends who trudge along on foot. ANC guards on the porches of the UN Headquarters and the Conseil Monetaire seem at last to have mostly wakened. As usual they sit spread-legged and half-asleep on metal folding chairs, their rifles lying on the cement beside them.

A picture I have seen dozens of mornings.

Judging from the streets, rain did not come during the night, after all. The dawn has been sunny, but now there are dark clouds in the sky and there may well be rain before noon.

As I walk to Schambourg’s bakery, Lermusiaux passes me in his black Oldsmobile, taking his daughters the three blocks to school. We wave. The town fool, as he so often does this time of morning, stands at the Conseil Monetaire driveway, dressed only in khaki shorts with a red necktie knotted and pulled tight against his skin. He’s executing close order drill, roaring orders to himself, falling over his feet and amusing the clerks who snicker and sometimes stamp their feet in enjoyment.

Coquilhatville from the Congo River (with apologies for the photo)

In the bakery a Katangese soldier who says he has no food is begging bread from M. Schambourg. He leans on his rifle and looks imploringly into the baker’s eyes.

“You’re no different from anyone else,” Schambourg says. His tone suggests this has been going on for some time. “If you want to buy bread, I’ll sell it to you. But I won’t give you any.”

“Monsieur?” says the baker, addressing me.

As usual I buy three couques, small Flemish sweet rolls, and hand Schambourg 90 francs. He shakes his head, commenting silently on the Katangese. Before I leave the shop, his begging begins again.

Back at the house I sit down in the living room among the remainders of last Thursday’s hurry and have an unsatisfactory breakfast. Schambourg’s couques, often delicious, are too dry this morning. Soda is the only water now that all the boiling pans are gone, now that Joseph has taken the filter. It’s not a breakfast drink. I open a can of fruit juice from the food stocks that remain in the magasin and drink it as one would canned beer. I miss Joseph’s omelette and the Kivu tea. Outside I can hear Jules talking to his men.

When I go out to the courtyard and we shake hands, he asks, “Did you sleep well?”

He nods. We have been regarding each other closely during this ritual, ready to sense any change that has taken place since we saw each other last night. But we seem the same as before.

Jules shakes his head and we go our separate ways. “I’ll see you at lunch,” he calls.

The first order of business at the Center is to try to send equipment out by Otraco. As I drive N’Djoku over to the port to get the papers processed, he tells me, “Patron, I am not happy.” He knows I will leave again if I must and does not want to be left behind again. Back at the Center Ahenga seeks me out in the office with the same plea. Once more we go over the ground covered yesterday: that they are not Americans, that they have no loyalty to the United States, etc., etc. The Director, they remind me, had said that there might be places for them in the USIS operation in Léopoldville. Can I make inquiries for them? I agree to try to get some message to Madison so that a decision can be made in Léo.

N’Djoku returns to say that Otraco has taken the expected move. It will no longer accept large cargo of any kind. I can stop preoccupying myself with the equipment. I felt critical of Madison for preoccupying himself with it; now I understand that it represents something to do.

What to do now? From all indications, though I have not yet gotten many this morning, the situation is continuing to fall apart. It seems more certain that eventually I’ll have to leave again, perhaps in a matter of hours. There’s little that can be done in the Center. I tell the boys to remain at their work in the library and with the films.

When I arrive at UN HQ, Belgians are gathered outside, awaiting news of developments. When I enter, a new feeling buzzes in the air. In the Game Room, shadowy in this still early morning light, I have the impression of other figures sitting by the magazine tables, looking up with interest at every newcomer who, like me, hurries past the ping-pong table to the office.

The radio is on in the empty office, humming contentedly to itself. Rishi’s nowhere to be found. I glance around for him in the halls and other offices. The secretary appears, maybe Portuguese, maybe Indian, I can’t tell. I address her in French. She doesn’t seem to know where Rishi is either. Back in his office, I thumb through papers on his desk looking for some acknowledgment of my last night’s message from the Embassy in Léo. I find nothing.

As I leave the UN, a car speeds into the drive, a door flies open and almost before it stops DeWalsch seems to be walking from it toward the group of Belgians. They open their circle and he moves into its center. “Van Nitsen,” he says. He expels a short, brutal mouth noise and draws his finger across his throat.

Van Nitsen is the manager of the Hévea rubber plantation just outside of Boende. As such, he’s the dean of the European community there and would be the first person targeted should the conquering rebels wish to introduce a reign of terror against the whites. In addition, he’s a personal friend of most of these men.

“Where did you hear this?” 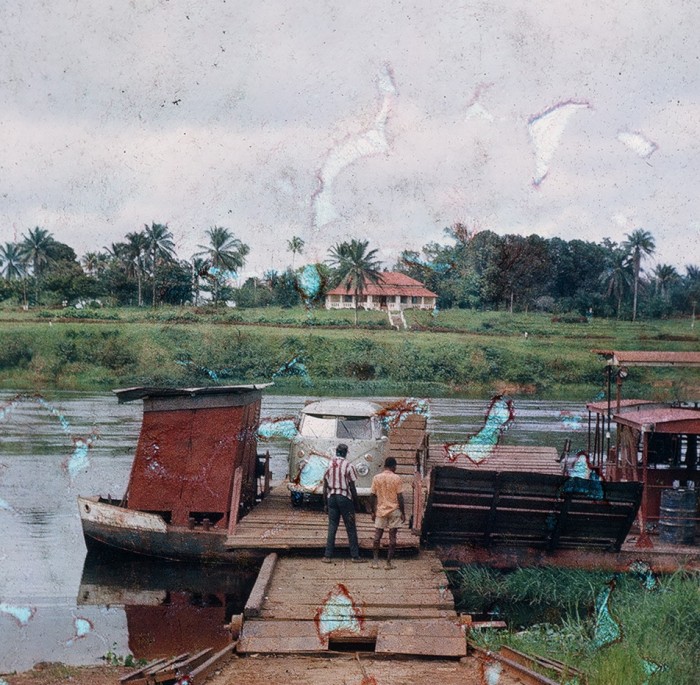 Boende: the ferry crossing where Van Nitsen was reported executed

But what kind of source is Radio Stan? We don’t know. Such an announcement would be just the thing to break the European morale in Coq – or in Boende itself if by some chance it’s still holding out. Could the rebels really have killed Van Nitsen? Many Congolese enjoy threatening a white man, from government clerks and soldiers on guard to thugs and bandits. But to kill one? For that a Congolese must overcome tremendous psychological blocks. Has the rebellion pushed Congolese beyond that psychological barrier? If so… We don’t even want to think of the cruel death Van Nitsen may have met. Or of what has happened to the Europeans and Americans in Stan.

“Radio Stan announced that Boende was taken yesterday morning,” DeWalsch reports. “And that in the afternoon Van Nitsen was executed at the edge of the river.”

There is a moment of silence.

Then DeWalsch continues: “It announced that Coq would fall soon.”

Before returning across the street to the house, I survey the men. This news has hit them hard. It has posed the question – go or stay – in a very direct way.

Back at the house I set myself to writing letters. The first to a girl I have plans to meet in less than two weeks in Munich. It’ll be Oktoberfest. A letter picked up only an hour before we evacuated last Thursday told me she’d succeeded in getting me hotel reservations. Reading over my note – which confides that I don’t know what the hell is happening – I realize that this activity is a kind of waiting. I don’t really believe any letters will be sent. But they give me, as we enter the lull before the storm, a sense of accomplishing something. What could be better than that?

Outside the usual town noises continue: cars coming and going from UN HQ; doors slamming; Congolese women yakking in shrill voices as they walk past; work sounds from Jules’ men in the courtyard. The sky grows black with clouds. Without noticing these things, none unusual, I write another friend, a Wall Street securities analyst, whom I hope to see in Europe.

Now there comes an urgent pounding at one of the windows in the courtyard door. Jules bursts through the door in the manner of la réaction vive: eyes alert, enormous strides, head poised forward (it’s as if he were sniffing).

“Did you hear that?” he asks. “Just a minute ago there was–”

Jules cocks his head as the sound repeats itself, a metallic rat-tat-tat-tat like those we heard after midnight that evening I played cards at the Madisons.

Shooting? Machine-gun fire? We look at each other, these questions in our eyes. Our ears strain for repetitions which do not come. What the–? As usual the Congo is stretching our sense of credulity. Can there actually be machine-guns firing in a town where I am living?

Next post: Fred sends a message to US Embassy Léo requesting an evacuation C-130.