Following a precipitate evacuation from the USIS post in the northwest Congo, ordered by his superior, Fred Hunter was allowed to return. He found the situation in the town much deteriorated and telexed US Embassy Léo for an evacuation plane. Here’s his further account: 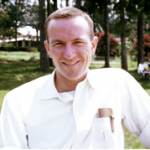 Returning to the house from the post office where I’ve sent the telex, I write Tom Madison a letter in several copies. It seems a crazy thing to do, but having been firm with the boys, it seems important to be firm enough with myself to honor my promise to write to Léo in their behalf, even though there’s no hope of getting permission to bring them out.

Half an hour later – I’m addressing envelopes to Munich, New York and Léo and wondering whether or not to write home – Rishi knocks at the door.

He watches as I read it standing in the doorway. It says:

coquilhatville=
most urgent.
tab 618 rishi from saunders. please transmit urgently following message to Fred Hunter, us consulate coquilhatville. quote c-130 scheduled arrive coquilhatville 1300 zulu today will evacuate up to 130 persons with one bag each. also understand two air congo dc3’s left this morning for coquilhatville carrying fresh troops and should be available for evacuation. you instructed to return by next aircraft.
signed godley unquote

The plane will be here in a little over three hours, at 2:00 o’clock. Since the Congo spans two time zones, messages indicate zulu hours, Greenwich mean time, an hour earlier than Coq and Léo.

I wonder what Rishi is planning to do. Of the UN personnel, beside him and Sami, only a few doctors are left, called in from the bush. These feel an obligation to the Hippocratic Oath. Earlier this morning, however, I heard a Belgian doctor, a pre-Independence hand, saying to one of them: “That’s fine, but are you going to stay around and let these savages chop you up the way they did Van Nitsen?”

“You going to send your people out?” I ask Rishi.

“I guess we’ll wait for instructions from Léo.”

Gee, he’s always calm! I admire that, but wonder about the wisdom of leaving his staff’s fate to people in Léo who don’t know what’s going on in Coq.

After Rishi leaves, I go into the courtyard to show Jules the message, then zip past Cabiaux’s house. He’s an orchidéeiste and plant boxes hang from the trees. Recognizing my car, he and Herman come out. They promise to spread news of the plane.

Next out to the Madisons’. When I honk, Louis, all smiles as usual, runs out to unlock the gate. Word has gotten around to inform him I’m in town. The house is in good shape. A pile of books stands on top of the buffet; mysteries borrowed from the DCCM, an Ian Fleming, and the Portable Conrad, which I’m tempted to make off with. I pay Louis and the other two boys and put the books in the car.

To the Mission. Dr. Mullen is there, discouraged with the futility of trying to get on an Air Congo plane. I tell him to be at the airport at 2:00, offer to fetch him when I realize he won’t want to leave the new Landrover at the airport. He’s already made other arrangements and will hide the Landrover out at Bolenge Station.

Tall, smiling Maurice is at Ron Sallade’s old desk in the Treasurer’s office. “Oui, tout va bien,” he says. I return the borrowed mysteries and ask for mail that’s arrived for the missionaries since last week. Laughing, he shows me an enormous pouch full of it. No question of trying to take that along.

Up in Gary Farmer’s old office, I visit Jean Bokeleale, new Secretary of the Church, upon whom its entire direction now depends. He opposed the missionaries’ withdrawal last week as an abandonment and greets me more coolly than he ever has before. He looks at his desk blotter as I tell him that I’m going out again this afternoon and want the Mission to use my car. “I will leave it at the airport,” I say. “You can pick it up there.” He takes the keys.

Returning to the car, I feel puzzled. Something’s changed on this mission ground that so long seemed a haven of friendship to me. Something more than the mere departure of my compatriot missionaries. The screen door that I have heard so often slam over at the Farmers/Taylors’ slams again. I glance across the road at the house, surprised to see it reoccupied already. Watching women move in and out of the house, I’m still pondering Bokeleale’s coolness. Does he feel that I was one of those who abandoned him? Yet resent my reappearance? Or is coolness his business manner? Do I want a fuss made over my presentation of the car? Now one of the Mission’s VW’s drives up and three Bolenge Congolese wave to me from it. When we greet each other, their faces are wreathed in grins.

On the way back to the house it suddenly hits me. “Les blancs partent!” “The mindeli are leaving!” The Congolese are delighted to see us go. Delighted! It’s like Independence all over again! Once more they’ll get our cars and houses, our furniture and mattressed beds, our silverware, plates, glasses, radios, soft chairs, clothes, everything that’s left. And they won’t have to work or take orders or do what they dislike doing. They’re delighted to see us go. Delighted! Most of them will welcome the rebels with open arms.

The next caller is a Belgian patron of our library whose name I do not know, though I recognize his plain face, chubby figure and slightly pigeon-toed walk. I’ve seen him around town, know that he works at Otraco and rides a bike (which suggests he’s missed out on the financial gain that is supposed to attract all colons). I haven’t talked to him since the morning he asked if we had the National Geographic in the library; he had a collection of issues that he’d sent home to Belgium. He’s my friend because, unlike so many Belgians, he’s always smiled and waved when we passed on the street.

After preliminaries he says: “I’ve heard American planes are coming this afternoon.”

I tell him the time.

“I’ll have my wife out there,” he says. “And I’ll go, too, if there’s room.” He looks a little sheepish and drops his eyes to his in-turned toes. “I stayed through all of it in 1960,” he tells me. “And nothing ever happened to me. But this time… This time I’m scared.” Indeed, he speaks for people all over town now packing their one suitcase. He smiles, relieved to have gotten it off his chest. “See you at the airport.” 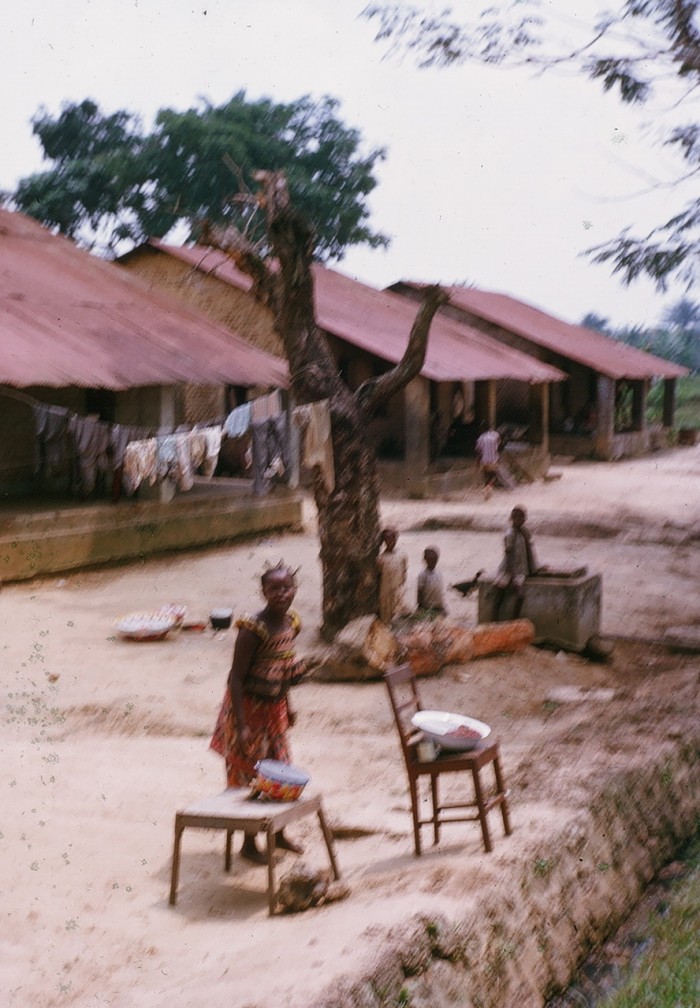 A scene from a cite in Coquilhatville

Packing myself. I pare down to one suitcase. Can’t leave the typewriter which has seen me through every day of this Coq experience, though I don’t quite know how I’ll get it on board. I decide to leave the cash box, put its money in my wallet, its papers in the suitcase. In its bottom compartment, where I’ve put them to discourage petty theft, three ball-point pens roll around. A while back I gave each clerk a pen, telling him he’d have to replace its loss from his own pocket. About six weeks later N’Djoku lost his – and began to bother me regularly for a replacement. “Patron…?” the prodigal returning, hesitant voice, big downcast repentant eyes. I’d burst out laughing, so would he and he’d wait another week before trying again. Remembering this game, I stick the pens in my pocket to give to the boys.

When I load the car, Jules and Pierre Bogaerts are talking together in front of the driveway gate. I join them, hear their speculations about the boat and the river and listen to their estimates of the safe time left in Coq. We joke a little – there’s still enough safe time for that – and Jules says he’s about to return to the river house for lunch. I say I’ll follow immediately after dropping by the center.

Contrary to my instructions, the boys have gone to lunch, leaving only Tata Edouard. More likely, they’ve closed for the day, figuring on the basis of rumors that I’ve already gone. I look around at what was only empty rooms ten months ago. That first day I was here alone, sitting on the floor. The old tata, pensioned, but still man enough to produce yearly babes, came in that day with his two tiny daughters, naked except for a little cloth and charms tied to thongs. They all stood and stared – and unnerved me with their stares. The tata and I have been father figures to each other. I’ve grown to rely on his steady presence.

When I go back outside, he shuffles up from his empty quarters. “Tu pars?” At first the familiar “tu” annoyed me.

“Oui, Edouard, I’m leaving.” I give him the pens for the clerks and realize immediately that little joke gifts built on allusions aren’t right for the occasion.

“Qui va me payer? Je demande qui va me payer?” Abruptly he’s quite angry, almost spitting the food he’s munching, waving his arms about his head. “I ask who’s going to pay me.”

Suddenly we’re in the moment before the storm where it’s dark, the wind has begun to blow. We’re shouting at each other; events are pulling us apart. Is this how things end with Edouard?

“Qui va me payer?” It’s what every Congolese wants to know.

“You’ll be paid. Have I ever failed to pay you?”

Grumbling, frowning, he walks back to the empty boyerie and I hurry off.

Passing Boudart’s house on the river road, where his partner Delinte is now living, I see Jules’ white BMW parked in the drive. Jules himself is talking on the lawn with Delinte and a man I do not recognize. Their faces are thoughtful and tense, their stances poised as if to take action. When I pause, still in the car, the man I do not recognize approaches. He’s tall, nervous and distracted, and in a quick instant he gives a bird-like impression of flying in circles.

“M. Oontaire?” he addresses me. “Are you coming with us in the boat?” I look confused, too. “The Sédec boat.”

So that is what Delinte and Jules are discussing. And this man is Clochette, manager of the local Sédec store who has been instructed by his superior from Léo that I am to be given a place in the boat.

“We are preparing the boat now,” Clochette chatters on when I do not answer. “We are about to go down and stake it now. Are you with us?”

I thank him and tell him I will leave on the plane. He hurries back to the group. I drive on to André’s house at the river.

When Jules pulls in beside my car at the house, he’s irritated. “Delinte wanted me to let him put the Sédec boat into this pier!” he says. “He would have this beach the center of attention for everyone watching the shore.”

Hardly have we entered the house when a car speeds into the chantier and throws up a mist of dust in skidding to a stop. We rush outside. It’s Clochette again.

“Your plane has come in,” he says.

Already? It’s not due yet for an hour.

“Someone told me it was in.” He pauses a moment. “Major Kwima won’t let anyone board it.”

“Major Kwima refuses to give anyone permission to board it.”

Next post: Fred gets to the C-130, but Major Kwima refuses to let refugees board.