Following a precipitate evacuation from the USIS post in the northwest Congo, ordered by his superior, Fred Hunter was allowed to return, only to evacuate again two days later. Once more he feels in limbo in Léo. 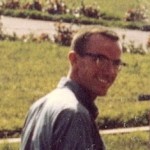 Léo is another world altogether.

At the Embassy I feel the chill of air-conditioners. My shivering corpuscles swim in thin blood. Officers frown into telephones: coats, beautifully knotted ties. Political section secretaries (scarlet lips, pancaked cheeks, titillating tits) swing girdled asses inside tailored skirts. Like Ad Agency Career Girls in New York. They wonder at the bush bumpkin sitting cold and wide-eyed in short-sleeved shirt, cotton trousers and gooseflesh. Is he really Officer Corps (as they’ve been told) or Staff Corps (as they suspect).

A short meeting with the Ambassador. This huge, friendly man stands behind his desk in rolled shirtsleeves, wrinkled trousers. His hair is mussed. Political Section officers, coated, unmussed, dance attendance in the great space of his office. He regards me over the top of reading glasses with lenses shaped like quarter moons.

Very quickly we review how things have deteriorated.

“What about our locals up there?” he asks.

I report what I’ve told them about loyalties to the United States.

That’s the end of the interview. He looks around at his POL officers and says, “Well, we’re out of that one.”

As I leave the office, I have the sinking feeling that the people in Coq – and what I’ve tried to build there – have been wiped away.

A long session in his POL Section office with the good Paul Bergman. He feels the US government usually tries to do too much. We compose a telegram to the Department. As we are sitting in his office, the Press Attaché comes in, then USIS chief John Mowinkel. He greets me with his big Norwegian smile and sparkling eyes.

When Bergman steps out of the room, Mowinkel asks: “Did you take the first plane out?”

I tell him that I did.

“Good. That’ll make the Old Man happy.” He lowers his voice a little. “There’s been cable traffic going back and forth about you. The Department questioned his judgment in sending you back there and told him to get you out.”

At last out alone into the Léopoldville night. I pass by the pied-à-terre. Thérèse and Martine are out somewhere. I go over to the Hotel Memling lobby where there’s some light and scribble on the open spaces of a Sabena timetable a note to Thérèse about Jules. Returning to the apartment, I slip the note under the door. Leaving, I meet Thérèse and Martine on the street, coming back from dinner. In the apartment Thérèse reads my note about Jules; that avoids the necessity of discussing his safety before Martine. She gets me a Pepsi from the frigo and tells me a little of what she knows. A second C-130, only partially loaded, has come down from Coq. On it, among others, were Mme. Bogaerts, whose son finally persuaded her to go, and M. DeWalsch. The ANC finally arrested him and the Belgian attaché, realizing they’d sent the message. The telephone rings. Someone asks about Jules. Hanging up, Thérèse re-reads the note. Finishing it again, she stares woefully at the wall.

“You said DeWalsch came on the second plane,” I say to jog her thoughts.

“Oh, yes,” she answers. She has to pull her thoughts back to that story. She gives one of her ironic smiles. According to what she’s heard, the attaché and DeWalsch were taken to ANC HQ. At a propitious moment DeWalsch, who had no diplomatic immunity, snuck out, went to the airfield and boarded the plane. And word has come that the attaché was released.

“I hope he’s out on the river right now,” she says, assuming that Jules will have made his escape in the boat with Delinte, Clochette and Pierre Bogaerts. “Do you think he could be?”

“I’m sure he’s safe. He can take care of himself.”

Martine whimpers with boredom. Thérèse reads the note yet again. I excuse myself. I have some dinner, get out to the basement apartment where I sleep in Léo and decide to fly to Europe as soon as possible. 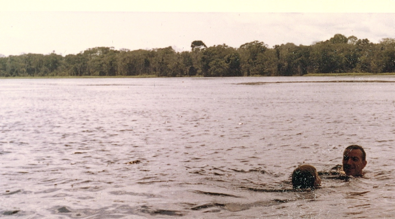 Swimming with Martine André, age six, in the Congo River

Coq was never taken. The mercenaries Marcus told me about arrived late the afternoon I left. They did not take up positions to hold the airport, but went instead directly to Ingende where they stopped the rebel advance.

With the failure of the rebels to take Coq, news of the rebellion seemed to fall out of the international press. In Munich at Oktoberfest with friends from the States, I tried not to think at all of the Congo.

What was Donanne doing at this time? Having returned from a summer with her parents at their Foreign Service posts in Cambodia and Malaysia, Donanne arrived at UCLA to begin a year-long master’s degree course in Library Science.

Next post: Fred returns to Bukavu in the eastern Congo where he first served.