TRAVELS IN AFRICA: The Crew at USIS Bukavu in the Congo, 1965

Perhaps it’s appropriate on our travels in Africa that we pause for a moment to meet some of the people. Here’s my crew at USIS Bukavu:

Jean Rusenyagugu spoke to me in smiles, in chuckles and laughter. That was because French was our common language, and neither of us spoke it well.

Jean was janitor-factotum at the USIS Cultural Center in Bukavu in the eastern Congo when I was the inexperienced, twentysomething bossman there. Soon after I arrived, he studied me with his broom. “Vous etes marié, Monsieur?” he asked at last.

No, I said, I was not married.

Jean scrutinized me, stunned. How could I not be married? Was I not an adult? Was not marriage a symbol of adulthood? How could foreigners be so strange?

Many months later, about to leave Bukavu, I bought a souvenir: a large cowhide drum, three feet tall and almost as wide. When I lugged it into the office, Jean smiled with delight. “A wedding drum!” he exulted. “You are going home to get married!” I’m sure he thought that my parents had finally found me a bride.

When I asked to take a photo of Jean, he cast his dustcloth aside and ran off, reappearing with a book in his hand. He posed for me in the sunny parking lot: stiff of stance, but grinning, nonetheless. He held the book before him, tenderly and proudly, and I photographed Jean Rusenyagugu, Bukavu janitor, fluent communicator with smiles, proud holder of a book he could not read. 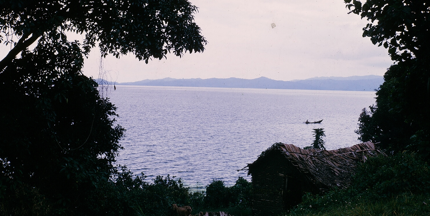 Déogratias Mpunyu, librarian-driver, was a long sliver of a man, easily 6′ 8″. He was a Tutsi, a refugee from Rwanda, the neighboring country just across Lake Kivu where Tutsi rule, stretching back into unremembered time, had recently been overthrown.

Literate, educated, adept in French and even attempting English, “Déo” seemed an ideal librarian. But the passion of his life was to drive. He longed to fold his long frame behind the steering wheel of the Center’s truck and drive it around town, honking and waving and shouting at friends. Young ladies with bundles on their heads would stop and turn their bodies to watch him pass.

Reports came that Déo brought little more than jubilation to his driving. He had no license – not too surprising in the strife-torn, newly independent Congo – and he was vague about how he had learned to drive. I grew concerned that claims of damages might be brought against the Center – for why were Americans in the Congo if they were not rich enough to pay damages? It became clear that I myself must be the licensing authority.

I proposed a test drive. Déo seemed delighted, laughing gaily. Anything to get behind the wheel! But I detected some uncertainty, too. I remember, as we started out, hoping very much that Déo really knew how to drive.

Perhaps his legs and arms were too long. Perhaps his head sat so high on his long Tutsi neck that his eyes had no proper field of vision. Perhaps I unnerved him. Whatever the cause, at the end of the first block, Déo drove into a traffic sign. It was wood; it splintered in half. Déo graciously accepted the consequences of his mishap and contented himself in the library. 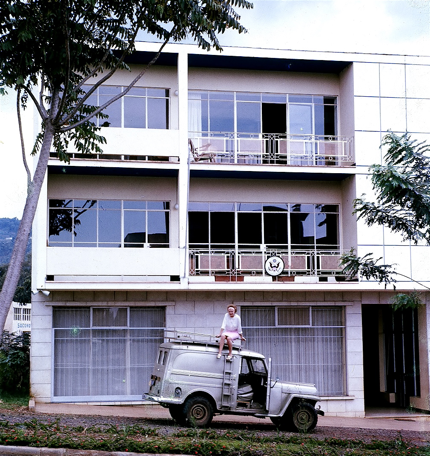 The film truck Déo could not drive outside US Consulate, Bukavu

My first morning in Bukavu Paul entered my office with distressing news. His wife’s mother had just passed on. Could he have time off to attend her funeral in Usumbura, the nearby capital of Burundi?

Of course I was being tested. But I did not even know yet what I was supposed to accomplish as Center director. So why play martinet? I let Paul go. If he liked to travel, that was fine with me. If I had any goal in Bukavu, it was to see some country.

I never figured out exactly how many wives Paul had – serially or simultaneously – or how many mothers-in-law he could claim. But Paul and I did see country.

We traveled into northern Kivu Province, quickly on a weekend. I went to see wildlife. Paul managed to find a very comely companion at a local bar. When I had to disturb him for the key to the truck, he walked through the lobby of the Hotel des Grands Lacs in pink silk pajamas to demonstrate for all to see how I was disturbing his amours.

On another trip, this one to show USIS films, we returned to Bukavu via Kagera National Park in Rwanda. I waxed poetic about the sleekness and grace of gazelles. He said: “Beaucoup steaks, Monsieur.” 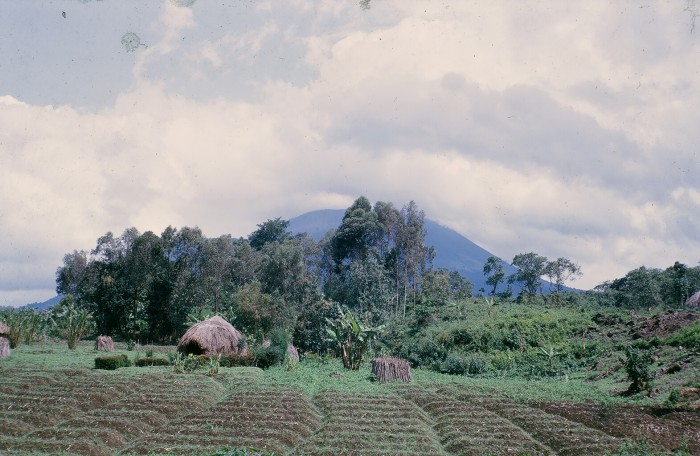 Paul Wemboyendja. Jean Rusenyagugu. Déogratias Mpunyu. I think of them now and then. Sometimes I smile wondering what they thought of me. Did “Frederic Hunter” seem a strange music in their ears? (How can it be otherwise?) Did I seem over-diligent, time-worshipping, gauche and a fool? (What white bossman in black Africa does not seem so?)

Perhaps there are nights when talk turns to the strangeness of white people: how ill-odored they are, how vulnerable to the sun. And perhaps one of these men – Paul or Jean or Déo – will say: “I knew an American once, worked for him.” And he will laugh. “Too much book!” he will say, thinking of the library at USIS Bukavu. “Hundreds of books and no woman!”

A confession: I vividly remember the photo I took of Jean Rusenyagugu, proudly holding the book outside the Bukavu cultural center. In my mind’s eye right now I can see the image of Paul Wemboyendja, with his pillbox haircut, sitting atop the film truck in Parc Albert. I have looked high and low for the pictures. Alas! There have been many moves in the intervening years. The photos seem to have disappeared.

If I think occasionally of Paul, Jean and Déo, I actually see Paul Polakoff now and then. Paul was the American officer at USIS Bukavu who made truly important contributions to the work there. He had excellent French and good contacts with local Europeans through the Table Ronde, a men’s lunch group of which he was a member. Paul contributed continuity, both preceding me in my second tour in Bukavu and outlasting me. Paul also helped me get set up in an apartment overlooking Lake Kivu once it became clear that my stay would last until my Congo tour ended.

While it’s often difficult to judge if information work is having any positive effect, Paul took items from the nightly Voice of America broadcasts and used them to produce a daily news bulletin for the elite of the town, a real contribution.

After I left, Paul pulled off one of the great Congo coups! He enticed his college sweetheart to come out to the Kivu with her two children and marry him. Paul and Claire, whom I knew in Los Angeles, made a great foreign service couple. Paul had a terrific career for the agency, most of it involving Africa.

What was Donanne doing in the late spring of 1965? She was living in a dorm at UCLA, finishing her year-long graduate degree in Library Science. Her father Don Ralston was about to retire from the Foreign Service and follow his daughter’s lead by becoming a librarian (he worked for many years as the deputy senior librarian at UCSB). The Ralstons would shortly join Donanne in West Los Angeles and they would all live together for about a year during which Donanne began working at the Santa Monica public library. She reappears in these posts in two more weeks!

Next post: As he finishes his Congo tour, Fred lucks into supreme animal viewing during the annual migration on the Serengeti plains.