Fred Hunter returned to the States from the Congo uncertain what lay ahead. Would he stay in USIS? What about marriage? Here’s what happened:

When I returned from Africa at the end of my two-year tour in the Congo, I felt torn about a future in USIS. By and large the work was satisfying – at least for a young man of 31. I found Foreign Service people vital and interesting – if perhaps unduly focused on personal status and attaining rank. I enjoyed living overseas, immersing myself in other cultures.

But Foreign Service life was obviously much more satisfying when shared with someone you loved. The single officer had to deal with loneliness, no one to talk to and have dinner with, no one to take along to – and seek refuge with – at the interminable cocktail parties. Some officers made do with casual relationships. That was not my style. I needed someone to whom I could commit myself.

The agency assigned me to Karachi, Pakistan. I was to report there at the end of home leave. Tour #1: Belgium. Tour #2: Congo. Tour #3: Pakistan. There seemed no unity of focus in that trio.

Moreover, I felt unready for a new continent. I wanted to understand more of what I had witnessed in Africa. “I felt no racial prejudice before I came to the Congo,” claimed an American Army officer I met in Léopoldville. “But I sure feel it now.” That struck me as stupid thinking. But many people felt that way. It might make sense to do graduate work in African Studies. Maybe I just needed some time to figure out what my next steps should be.

I resigned from USIS, returned to Los Angeles, drifted a bit and then opted to do a masters degree in African Studies at UCLA. I moved into an apartment in Brentwood. I began dating. Two of the girls were daughters of retired Foreign Service officers. I was not consciously looking for a wife. But I suppose I was ready to fall in love.

Carol Waymire, a young woman at the Christian Science church in Westwood, had been in the first Peace Corps class, serving in Ghana. We hit it off, for very few people had had any experience of Africa in those days. As we crossed the street from the church one Sunday morning, Carol introduced me to a girl who was doing a degree in Library Science at UCLA. She happened to be, as I was, a graduate of Principia College and had lived for two years in South Africa. Newly resigned from USIS, I tried to convince her that the agency was full of great opportunities for librarians. So Carol’s stint in Ghana was the African linkage that got me introduced to Donanne.

Donanne finished her degree and got a job as a reference librarian at the new library in Santa Monica. I would drive down there evenings to hang around and see her home; she was living with her parents then. She kept telling me she didn’t want to see me so frequently. Whenever she said that we began to see each other more often. When she worked nights at the library, I sometimes brought her a picnic dinner.

Then I took a trip east (my twin brother was having a play done in Tennessee and I had to see it). I had been pressing Donanne so hard that she expected to get letters from me every day. But I was too busy to write. That omission got her attention. Maybe she should not take me for granted, after all. Hmm. Donanne left her parents’ apartment to room with Carol and another friend. She left the library and began working in the Research Department of Universal Studios.

I was not the kind of guy to ask a girl to marry him more than once. If I would allow myself to ask only once, I had better be like a competent attorney: he knows the answer before he asks the question. I asked the question shortly before Christmas, 1966. The answer was the one I wanted. Donanne soon quit her job. Why work? She was getting married! No long engagements, thanks. We were married in March, 1967. 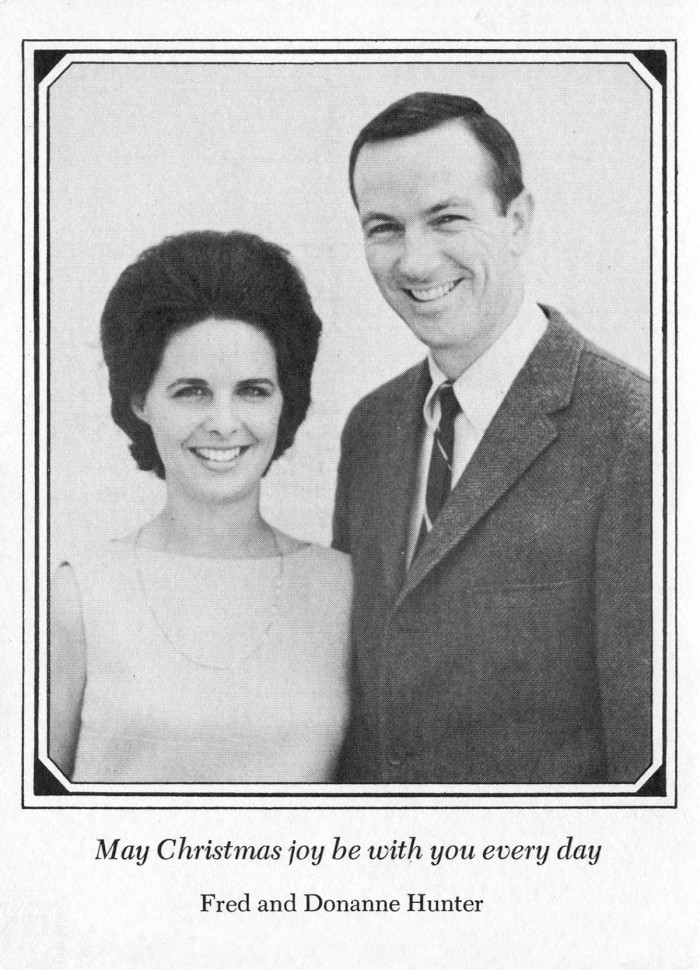 That spring I finished my degree in African Studies. I’d been writing a novel about Coquilhatville that was less a novel than a means of thinking through that experience. We had money that I’d saved from the hardship pay I’d amassed in the Congo and my brother and I began to do some menial television writing: concocting voiceover narration for Cesar Romero to record for a show called Cesar’s World, produced by Mustapha Akkad.

About this time I sent an essay to The Home Forum page of The Christian Science Monitor, then an international daily newspaper, now a weekly magazine. Called “The Terrace,” it was a young husband’s view of his first year of marriage. The bonding that occurred showed him he’d hardly known his wife when he married her. Silence Buck Bellows – there’s a New England name for you! – accepted this piece from a writer unknown to her. Curious about me, she asked for background information. I replied that I’d been in the Congo and had just finished a degree in African Studies.

Silence wrote back, wondering if I’d be interested in putting my knowledge and experience of Africa at the service of the paper. A second African linkage! I thought: Why not? I can write book reviews. Then DeWitt John, The Monitor’s editor, wrote, asking much the same thing. I replied positively, still doubtful that the paper wanted more than book reviews. I may have noticed, however, that the byline of Jack Shideler, the Africa man, had disappeared from The Monitor’s pages. I hoped I would hear from John before Donanne and I were to go on a super-cheap Hawaiian vacation, occupying an Oahu apartment for $5 a day. But we heard nothing.

Then in the fall I went back to Boston to interview with DeWitt John, Courtney Sheldon, the managing editor, and Hank Hayward, the foreign editor. The Monitor was looking for a new Africa correspondent. Both Jack Shideler and Bob Hallett had died in the field. No staffer on the paper would take the assignment. It was daunting to think that correspondents were dropping as quickly as the first Europeans sent to the Ivory and Gold Coasts. But I had survived the Congo. Donanne was more than willing to return to Africa; she had said to me shortly after we were married, “We aren’t going to live in Los Angeles all our lives, are we?” I was unemployed. Fall into a foreign correspondent’s job on the basis of an uxorious essay? Thank you very much! I’ll take it!

Next post: Donanne and Fred arrive in Senegal where he will write his first dispatch as The Christian Science Monitor’s on-the-ground Africa correspondent.