When Donanne and I first arrived in Nairobi where I would start work as the Africa Correspondent of The Christian Science Monitor, we, of course, had no place to live. What this meant: 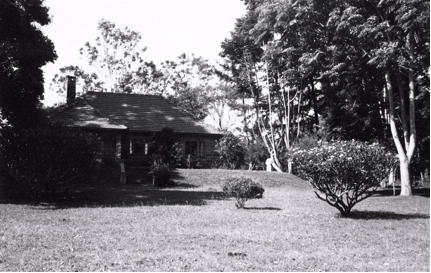 Hotel-living at first. We lodged at the Norfolk Hotel, famous for high-living British colonials riding horses through the dining room in long ago yesteryears. We had a small cottage at the back of the property out beyond the garden where superb starlings – my first acquaintance with them – jumped around inside an aviary. There was no heat in the cottage. This was East Africa, mere miles below the Equator and you weren’t supposed to need heat. There were even open vents at the ceiling for the circulation of air. But Nairobi lay in mile-high country and it was chilly. We bought East African Standards and Daily Nations so that I could keep abreast of the news. Once finished with the papers, we stuffed them into the air-vents to stay warm.

We had the devil of a time trying to find a place to live. We talked with estate agents. We rented a car from a place called Odd Jobs on Muindi Mbingu Street and went house- and apartment-hunting. Alas! without success. Finally we heard of a house, rent-controlled and empty, seven miles outside of Nairobi on Rosslyn Lone Tree Estate. A widow living in British Columbia owned the place and wanted desperately to sell it, but had been unable to do so for several years. We took a look. It was “old Nairobi.” Constructed of field stone, it offered an adequate living/dining room, a largish master bedroom, two smaller rooms (each room had its own wash basin) and a kitchen that defined the term “basic.” It was dark. The “cooker” was pre-World War II. The basin stood on two legs anchored to the wall, apparently on the verge of collapse. The young Kikuyu tending the place seemed awfully nice and probably could be hired as a servant. Hmm.

But no. Seven miles was too far out. Moreover, the place had its own well; the water was potable but bad for one’s teeth. Residents had to cart drinking water from Nairobi. But the deal-breaker was the kitchen. It was simply unbelievable..

I went off to Ghana to cover the elections and the restoration of civilian rule.

When I returned from Accra two weeks later, Donanne had not been able to find anything. By then we wanted very much to get out of hotels. We took another look at the house at Rosslyn Lone Tree Estate. On the minus side, the kitchen was not to be tolerated. On the plus side, the property was “real Africa;” at seven miles out it would offer a refuge from the bustle of Nairobi. Moreover, it was or had been a coffee plantation. Karen Blixen (Isak Dinesen) had lived on a coffee plantation, probably in a house made of field stone, maybe with a 12-foot-high anthill at the end of the drive just like the one this house featured. Who could forget the first line of Blixen’s masterpiece? “I had a farm in Africa, at the foot on the Ngong Hills.” We all pay homage to Karen Blixen in differing ways. We paid ours by taking the Rosslyn house. 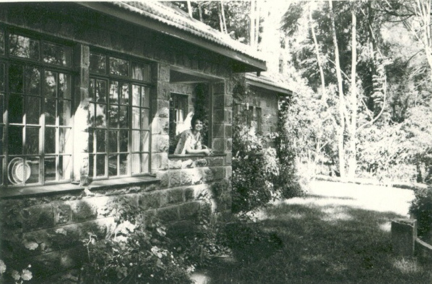 Even so, we continued to look for a more permanent place to live. After all, the Rosslyn house could be sold out from under us at almost any time. These efforts did not bear fruit. Finally we settled into the house, expecting to live there indefinitely.

Recollections of that house:

We were not its only occupants. There was a resident upstairs – whom we never saw – living above the ceilings. We could hear it at night. We would lie awake, staring at the ceiling, wondering if it would emerge, as this neighbor went sliding about its quarters. (It did not step; it slid.) Was it a giant slug? A sloth? A dragon? We never knew.

There were spiders in the house. Not necessarily a bad thing because they keep down insects. But they seemed to be very pregnant spiders and they kept having babies. Sometimes, returning from dinner or a movie in Nairobi, we would find dozens of tiny baby spiders hanging from the hall ceiling. Donanne would get out the vacuum cleaner, suck the babies into its innards and then seal the machine so that none could escape. 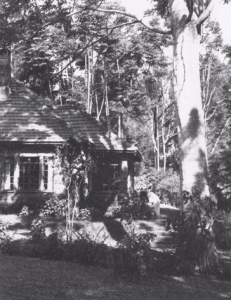 The house had been built in the colonial days. Its water came from a well, not from a city waterworks. Without problems water flowed into basins and then emptied into– Well, we hadn’t inquired into what. One evening I was working on a dispatch in my office, the small bedroom overlooking the expansive yard outside. I heard a strange scratching. Stopped work. Looked about. Was it the sloth? The dragon? Nothing. Hmm. Went back to work. More scratching. More looking. Again returned to work. More scratching, a metallic sound. Then scratching of the sort that might be made on porcelain. I glanced at the basin behind the desk. Something was peddling furiously to escape the basin. A mouse. I nearly jumped out of my chair. I may have yelled with surprise. (Men do sometimes yell at the sight of a mouse.) Donanne came running.

We caught the critter and escorted it from the house. Then we carefully examined the basin. It did not empty into under-house plumbing, but simply into the garden outside. The scratchings I’d heard were those of the mouse making its way up the pipe. We put a stopper into the basin.

The neighbors along the estate road never paid any attention to us. (Because we’d like to have known our neighbors, Donanne once took a welcoming plate of cookies to a couple who had just moved in. Never heard further from them.) But Thomas, the neighbors’ cat, did wander over, picking its high-stepping way over the tall grass. We like cats, thought it would be fun to have a friend. 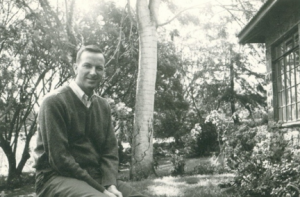 Over a period of days we worked at becoming acquainted. We even allowed Thomas inside the house. He so liked the house that he wanted to mark the territory as his own. We came upon him one day, tail held aloft, one masculine hind leg in the air, anointing our best chair. Wowee! If that was merely marking territory, it very much looked like something else. Yeegads! Was the chair ruined? Would the whole living room smell? Rather too excitedly I rushed at Thomas, shouting and clapping my hands. I chased the poor guy outside. We were too new in our acquisition of wildlife lore to realize an animal would mark its territory. Whatever. Thomas never came back.

Seven miles out was not all that convenient, more of a problem for Donanne (who was stuck at the house) than for me who used the car to chase stories. When we were in town at night, it seemed like a long drive home along a very dark road. One night driving home we had to slam on the brakes to avoid hitting an obstacle in the road. At first we were not sure what it was. Moving closer, we saw that it was a truck, parked smack in the middle of the two-lane road. As we moved closer, we saw that the hood was up. Still closer we made out the haunches of an African bent over, messing with the innards of the vehicle. We crept past and sent a good thought to him and all drivers on that road.

I will let Donanne describe that famous kitchen:

In retrospect it wasn’t that bad. It included the basics. A small fridge, a sink, a cooker, a few shelves, a light bulb – and a pothole in the middle of the cement floor. Filled with crumpled newspapers and covered with a woven mat from the bazaar the pothole in the floor mostly disappeared. The two-legged sink leaned against the wall under a window which opened onto the back of the property and through which a smiling Laban delivered tetra-pak milk cartons. The cooker was up a step in a shadowy alcove. From the heights of its hooded vent came strange sounds that made one wonder what might fall into the cooking pot. Stirring semolina was not without its drama. Something did fall once, black and wiggly, but I don’t know what it was. When it arrived, I left. Best of all, through the open windows of the kitchen and the rest of the house wafted the memorable fragrance of jasmine. We had no real grounds for complaint. After all, now we “had a [place] in Africa” if not “at the foot of the Ngong Hills,” at least on the road to Banana Hill.

After we’d been in the house about five months, we were notified that the widow in British Columbia had succeeded at last in selling the place. We would have to start house-hunting all over again. But wait! Sub-Saharan Africa was an enormous beat to cover. Maybe it made more sense for us to wander the territory for a time, visiting the countries I was supposed to cover and sending The Monitor reports about them. I proposed the idea to my editors. With extraordinary generosity they agreed. The housing allowance that I would no longer receive would help defray the costs of Donanne’s traveling with me. So we said goodbye to the house at Rosslyn Lone Tree Estate and set out on eight months of travel.