TRAVELS IN AFRICA: PARIS: Trying to Get to Ghana, 1970

In June, 1970, Fred and Donanne Hunter headed to Ghana to cover what might be the last great exhibition of tribal ritual in Africa: the enstoolment of the Asantehene. 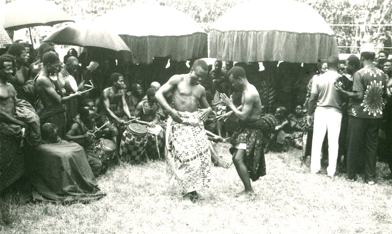 What we hoped to see in Ghana

Donanne and I had been in South Africa to cover the election. Now we started north from Johannesburg to witness an event of signal importance in Ghana. This was the accession of the new king of the Ashanti people, called the Asantehene, to the tribal throne, the Golden Stool. The ceremonies surrounding the “enstoolment” might be the last great exhibition of tribal ritual in Africa. I did not want to miss it.

We flew into Lusaka, Zambia – but not directly. That was because most of black Africa had no relations with white-ruled South Africa. Malawi did. And so a brief lay-over in Blantyre, Malawi, was required to remove from us the taint of having been in South Africa. From Lusaka we took a UTA flight to Douala in Cameroon, expecting to spend several weeks in that country and Nigeria. From there we would go on to Ghana and to Kumasi, the capital of the Ashanti.

But problems awaited us in Douala. We were refused entry into Cameroon. Why? Because we had South African visas and entry stamps in our passports. In other words, what worked in Zambia, a state neighboring South Africa, did not work in far-away Cameroon. We were not permitted to telephone our embassy. Our passports were taken from us; so were the air tickets that Lufthansa in Johannesburg had written for us. While our luggage was retrieved from the baggage claim, we were guarded by police in the transit lounge. When the UTA flight was ready to leave for Paris, we were escorted across the tarmac to it. We were given our Lufthansa tickets from which the sections for onward travel to Lagos and Accra had been removed. A new section had been written sending us to Paris.

We arrived there at night. A thunderstorm had just broken over the city. The Service d’Accueil told us of a room with shower in the Latin Quarter. We took it. We taxied through pelting rain to the hotel. The room was on the sixth floor (no elevator). Yes, it had a shower. Complete with appropriate curtain. Smack in the middle of the room. Where was the toilet? The men’s was down the hall. The women’s was on the floor below.

At the American Embassy we obtained a second set of passports. We got new visas at the Ghanaian Embassy. We spent six days trying to return to West Africa. Why six days? Because I was damned if I was going to pay new fares to get us back there.

At the UTA ticket office I was told that the fault was Lufthansa’s; after all, we were flying on Lufthansa tickets. At Lufthansa I was told the fault was UTA’s; after all, we had been pulled off their flight. For days I bounced back and forth between the two tickets offices. Finally a Lufthansa supervisor said an unequivocal no. He turned his back and walked away. I was so pissed I vaulted the ticket counter and went after him. He ran upstairs. I pursued him. He turned to face me in his office, uncertain what I might do. I insisted that in issuing our tickets Lufthansa Joburg should have known we could not enter Cameroon coming from South Africa. He said nothing. Therefore, Lufthansa had a responsibility to return us to West Africa. He looked at me. I was taller than him; I was clearly intemperate. If Lufthansa returned us to Accra, he stammered… Yes? Yes? Would I agree to make no claim against the airline? Of course! Ya wohl! We could go!