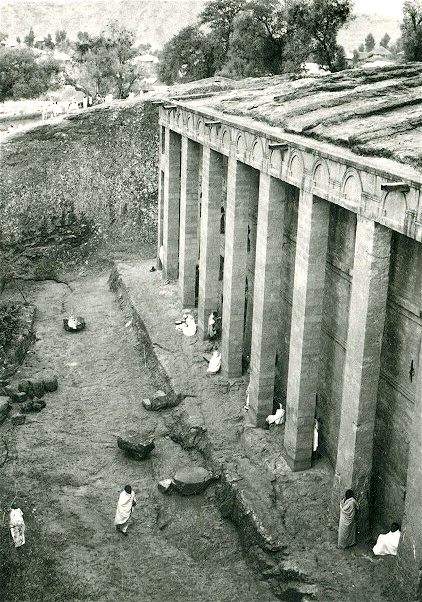 Sunday at one of the sunken churches at Lalibela

Donanne and I flew north from Kenya to do some reporting in Ethiopia about its ancient cities: Lalibela, Gondar, Axum. When we flew over Haile Selassie’s kingdom, the gorges below us dwarfed that of the Grand Canyon. An explorer of Ethiopia – James Bruce, I believe – wrote that he had been told the country was tableland. This was true, he discovered, but the table was upside down. Venturing into the ancient kingdom meant climbing up and down the legs.

On the plateaus above some of the canyons, farmers had carefully laid out fields; they were green with crops. But the fields were edged with chasms. You could not help wondering how farmers ever got their produce to market. Perhaps they were subsistence farmers and ate what they grew. 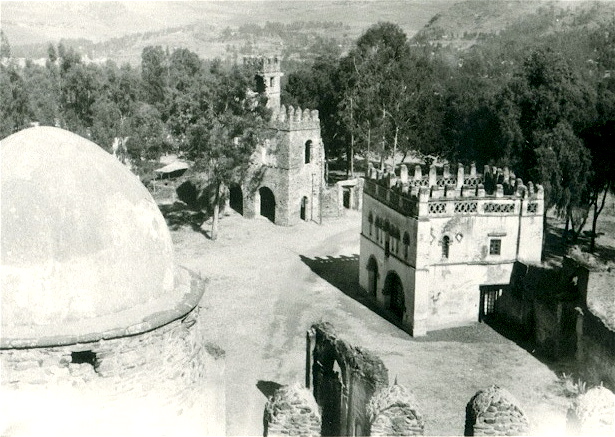 Ancient palaces at Gondar, Ethiopia, here and below

We stopped first in Gondar, a city of ancient palaces. Before the 16th century the rulers of Ethiopia and their followers moved around the realm, living in temporary royal camps, feeding off the surplus crops of farmers who, for that reason, did not need to worry about marketing their produce. By the mid-1500s they began regularly to spend the rainy season near Lake Tana. In 1635 Emperor Fasilides founded Gondar which was nearby. Palaces were built there over the next century, scenic and quite unexpected by the traveler.

There was no story there for me, but I made the mistake – you only make it once – of wising off to an airport guard. He was searching my luggage for small arms. Donanne and I were both whisked away, sequestered, body-searched and separated. Separated concerned me. Donanne was searched again, but we made our flight. And then discovered that a similar plane had been hijacked the week before, putting Ethiopian security services on high alert. As I say, you make that mistake only once. 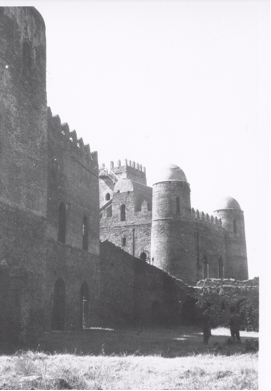 Our flight to Lalibela – sheep and goats flew with us in the baggage compartment – landed in a wide opening at the end of a canyon, a wash through which water would surge if rainfall were ever torrential. But it was dry now. The sun had baked the canyon walls a parched yellow. It sucked the moisture from our skin. We breathed dust. A man sat beneath a tree at one side of the runway. His donkey grazed nearby. Goats pulled at grass further along. Close by a jeep awaited debarking passengers. Lalibela itself was a good ways off.

We jounced the miles to it and got settled at the Seven Olives Hotel, a single-story structure, maybe five rooms.

We had come to Lalibela to see African cathedrals built about the same time as the great Gothic cathedrals of Europe, in the 12th and 13th centuries. But these Ethiopian churches were remarkably different for the Gothic cathedrals soar upward, over the surrounding countryside. The structures in Lalibela do not soar at all. In fact, they are hardly visible on the horizon.

Still, a visitor to Lalibela feels a similar reverence for the dedication and workmanship that gave– No, not “rise.” For in Lalibela the impulses, religious and architectural, gave “rise” to nothing. The churches were not built at all. Rather workmen carved them, hewed them out of granite rock.

As we walked along the path, the ground ahead of us suddenly fell away. At our feet, across a trench of perhaps fifteen yards, we saw a church. We descended to the terraceway outside the church and entered. A dozen churches existed at the site.

Cut out of solid rock, the interiors of the churches were dark – despite the windows carved into the walls. Some of these had cross motifs. We had visited European cathedrals. The craftsmanship and deep devotion that created them awed us. We felt the same awe here – and asked the same questions: Why? How? How long?

We visited one church after the other. Coptic priests tended them, light-colored woolen cloths draped about their bodies. They reckoned time by the Julian calendar. The year might have been 1470. They seemed receptacles of tradition, purveyors of superstition. They watched us; we nodded. 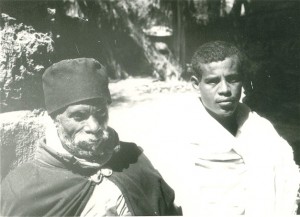 Coptic priests seemed to live in the 13th century

In the late afternoon we had tea on the terrace of the Seven Olives. We watched shadows inch up the canyon walls and had dinner with three Americans, Department of the Army civilians stationed in Korea.

The next morning we went back to the churches. It was Sunday. Worshippers wrapped in white cloths walked at the edges of the trenches. They filled the terraces outside the churches. They propelled our imaginations back through time, to New Testament days. It seemed perfectly plausible that Jesus had healed and preached to people that looked and thought very much like these. 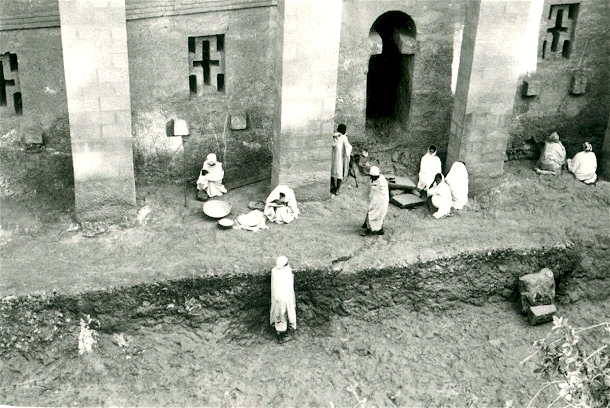 Sunday at one of the sunken churches in Lalibela