TRAVELS IN AFRICA: BURKINA FASO, The Burkinabe woman in Ouagadougou, 1970

Perhaps it’s appropriate on our travels in Africa to pause for a moment to meet some of the people. Here’s an African I keep thinking about:

Sometimes a man catches sight of a woman, maybe only fleetingly, just a shared glance, not even a word exchanged. And the woman makes a captive of him. Months, even years go by, then unbidden she’s moving around inside his head. She’ll tiptoe through his memory. She becomes a kind of friend. He finds that he’s rather pleased when he stumbles upon her in his thoughts.

But I did. The country was called Upper Volta then and having stumbled on the entry in my daily diary for August 4, 1970, I see that I was on my way to interview a local politician called Joseph Ki-Zerbo at his home. He ate his lunch while I questioned him. The woman did not rate a mention in my diary. But while I have little recollection of Ki-Zerbo, my mind’s eye still has an image of her. It’s not that she excited my virility. She struck something different – and awakened in me a sense of what it was to be African.

I was in a downtown street. Not the main street because there were no cars. I was walking in the center of it. Sweating probably because it was shortly after noon and the sun was glaring overhead. All around me vibrated the cacophony of African life. Kids were playing. Trucks were honking. The air carried the laughter of market women.

Then something magical happened. Ahead of me I noticed a large, tall, amply rounded Ouaga woman dressed in a bodice and cloth. She wore a pink, diaphanous headcloth of some faux silk material, tied in a manner that was all the mode in town just then. The pink was perfect against the lustrous dark-chocolate of her skin and inside an over-garment of the same material she floated along. She was barefoot in sandals and she really did float. The heat did not oppress her even though I noticed on her brow beads of perspiration catching the light. Her hands waved delicately a little out from her sides.

As I drew parallel to her, I caught a sweet, womanly scent – not at all what I would have expected in that heat. She glanced at me. I nodded. She smiled. Smiled in a way that was like a shining in her face. She was a large, sweating woman, walking in the noontime sun. But she moved with absolute grace. She was serene; she was beautiful. She knew who she was. She was happy to be that person and was happy to have someone friendly walking beside her.

I think of her now and then. So many Americans want to be somebody else: a fashion model, a movie star, a CEO. This woman was happy to be who she was. Much to my surprise I’ll find her sometimes walking with me in the road. Whenever I nod at her, she smiles. 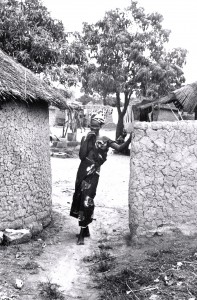 Burkinabe girl at a village outside Ouagadougou

Fred’s novel “Joss The Ambassador’s Wife” has just been published!