For four years Fred and Donanne Hunter lived in Nairobi. From there he covered sub-Saharan Africa for The Christian Science Monitor. One weekend they visited an anthropologist friend working on a rural district north of Nairobi. Here’s their report:

When we were living in Nairobi, Donanne and I got together occasionally with David, an anthropologist acquaintance from the University of California at Santa Barbara. He was a neighbor of Donanne’s parents. He was conducting a field study in Mbere District in Kenya’s Kikuyu heartland and invited us to visit him.

One Saturday afternoon in May we drove out of Nairobi, headed for Mbere. After recent rains dark clouds hung above us. But the road north was in good repair. Once out of town we sped past Kikuyu farmers working in their shambas. The air smelled fresh after the rains. We watched women carrying water on their backs in huge oil cans. Tumplines stretching across their foreheads supported the weight of the cans and eventually formed depressions across them. Kids in villages with Harambee schools built by local volunteers waved to us and we waved back.

This, it seemed to me, was how the real life of Africa was lived, in the countryside. But the coverage most reporters provided from Africa rarely dealt with rural happenings. They weren’t considered news. The Monitor, however, might devote some space to reportage from Mbere. I was thinking like most journalists do, hoping to get something usable out of our visit with David.

When we turned off the highway at Embu, the paving gave way to murram. In places the murram gave way to mud. We saw stretches where our little Datsun might get stuck, places ascending to a ridge line and dotted with potholes where tires had dug in for traction. Fortunately, we had no trouble. We found the house where David was staying – very splendid for Mbere! – the former home of the overseer of a now defunct British-American Tobacco Co. operation. He had other guests: a government economist and his wife, both Brits, and an American with the Special Rural Development Program that David was studying. Once we got settled, we all had tea and expat chat: where we’d been, what we’d seen, David reminiscing about the Ghanaian community outside Accra where he’d lived while writing his dissertation. The others left to get back to the paved road before rain began to fall.

David’s house servant was of fragile health, his condition varying in direct proportion to the number of guests, the greater the number of guests the more fragile his health. Although three of the guests had left, the servant proved unable to face dinner. David asked Donanne to officiate and declared himself unembarrassed to make this request. (I was pleased that this strangely pre-women’s lib act did not embarrass David for it rather embarrassed me. David, former District Commissioner, knew how to get people to do things for him. Donanne’s dinner was undoubtedly better than David’s would have been.) While the three of us ate, rain started pounding on the roof.

David said that he usually spent Sundays, greeting people he’d gotten to know and checking in with his informants. He’d be happy to have us tag along. I hoped such an excursion would produce interesting stories of rural Kenya.

David had already told stories that intrigued me. One concerned a rare event in Mbere. A man, husband to four wives, had recently received cattle as bridewealth for a daughter. He decided to use the cattle to pay for a new wife for himself, his fifth. And, in fact, he did this. But, by custom, these new cattle were supposed to be used as bridewealth for his recently married daughter’s brother, the offspring of the same mother. Eventually there was a reaction in the community. By using his daughter’s bridewealth, he was seen, according to Mbere reckoning, as having married his own daughter, thereby violating the incest taboo. The man attempted to retrieve the cattle used as bridewealth for the fifth wife. This proved to be impossible; the fifth wife’s family would not return the cattle. Out of options, the man committed suicide, a rare act in Mbere.

Another story dealt with problems between Mbere/Kikuyu initiation practices and those of outsider Luos. A Luo had been sent to Mbere as a government official. The national ideology proclaimed everyone to be Kenyan now; that was the new identity. But some Mbere did not like a Luo official living among them.

At initiation the Mbere/Kikuyu circumcise; no male Mbere/Kikuyu could be considered an adult unless circumcision had occurred. Luos do not circumcise. The Luo official had a post-initiation teenage son. Some Mbere objected to this young man acting as an adult. Probably to express their hostility toward his father, whom they considered arrogant, Mbere ruffians seized the teenaged son. They forcibly circumcised him.

I hoped The Monitor would not feel itself too strait-laced to print this material. An earlier piece I had written about the spread of venereal disease causing young men of a Tanzanian tribe to seek brides outside the tribe, an unusual step, had challenged the editors, though a version of it did run.

The next day, David promised us, we would meet local people as he made his rounds of the area, checking in with informants. We looked forward to meeting them! 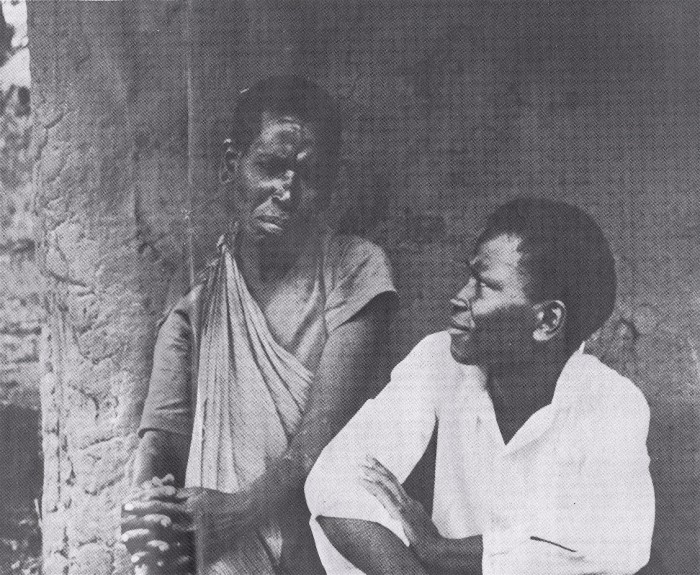 Anastasio and his mother whom you meet next post

Next post: Meet Anastasio, one of David’s Mbere informants.

This visit to Mbere served as the basic material for Fred’s story North of Nairobi in the collection Africa, Africa! Fifteen Stories. Check AA out at www.FredericHunter.com.

TRAVELS IN AFRICA: BURKINA FASO, The Burkinabe woman in Ouagadougou, 1970