Fred Hunter covered sub-Saharan Africa for The Christian Science Monitor in the early years of the ‘70s. Here’s the first of several accounts of a trip to Southern Africa before independence swept the region and everything changed.

In early 1972 the British and the white minority Rhodesian governments negotiated terms to settle the dispute between them.  The dispute stemmed from white Rhodesians declaring a unilateral declaration of independence (UDI) and forming a government that excluded Africans from any meaningful political participation. Once negotiated, the two sides then faced the challenge of selling the settlement terms reached by the Pearce Commission to the country’s African majority. That, they hoped, would cut the Gordian knot tied by UDI.

These sales efforts and African reactions to them were news.  Most of the World Press from Nairobi flew to Salisbury, the Rhodesian capital (now Harare), to cover the story. I arrived on Sunday via Blantyre, Malawi; it was not possible to fly directly from African-ruled Kenya to white-ruled Rhodesia.

On Monday I drove to Mrewa with Stan Meisler of the Los Angeles Times, Jim Hoagland of the Washington Post and Charlie Mohr of the New York Times to attend a meeting where Africans shouted no when queried about accepting the settlement terms.

On Tuesday I went to Sinoia where I talked with a Pearce Commission member and saw white farmers bringing in their laborers to testify in support of the settlement. On Wednesday I drove again to Sinoia, this time with Stan Meisler, to go with a group of journalists to Zwimiba Tribal Trust Land where we witnessed chiefs accepting the settlement terms inside a building while a crowd of 700 rejected it outside.

Later that Wednesday my wife Donanne arrived. She was five months pregnant. Fortunately, our good friends Michael and Gillian Noyce, whom we had first met in Boston, came to the airport with me. We later had dinner with other Rhodesian friends Ralph and Sheila Burr and the Noyce’s baby boy Alistair, aged four weeks. He slept peacefully under the table at Zorba’s Tavern. (Ralph Burr knew details of how sanctions-plagued Rhodesia succeeded in smuggling gasoline into the country, but never dropped a hint as to how it was done.) We spent a week in Salisbury, Donanne frequently sharing new mother talk with Jill Noyce.  I chased down stories and eventually wrote a piece about African rejection of the settlement terms. 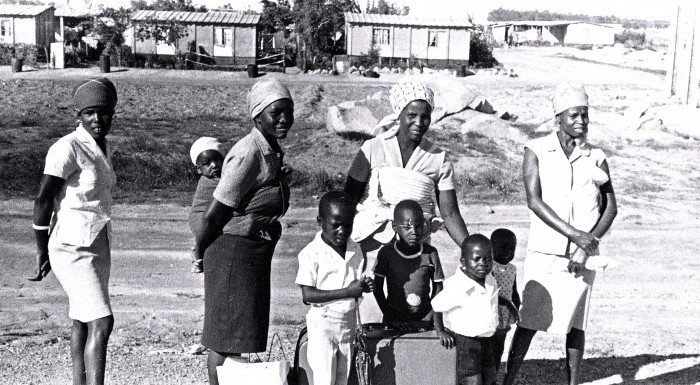 After another full week in Rhodesia we flew to Johannesburg the following Wednesday for my second exposure to the South Africa where Donanne had finished her secondary education as the daughter of the American diplomat assigned as the consul in Port Elizabeth. This was still the era of apartheid, the ideology of the Afrikaner-dominated National Party. That era – which now blessedly seems ancient history – enforced a rigid system of racial separation on all South Africans. It conceived of Europeans or white people as a master race, Africans as fitted only to act as their “hewers of wood and drawers of water.” Apartheid also established special racial categories for other people: Indians, Malays and Coloureds (those of mixed race).

This racial system – so I thought – created special responsibilities for an American journalist. Presumably he arrived in South Africa deploring what he’d heard about apartheid or “separate development.” (This was certainly the case if he had married the daughter of a Foreign Service officer who had served there.) His disapproval increased the more he examined it. Even so, for the sake of fair reporting he needed to understand how it had come to be and why it persisted in its ever more rigid forms. And why it was tragic for virtually all South Africans, making victims of them all. The oppressed were obviously victims of it, but so were those – regardless of the creature comforts they enjoyed as a result of it – who were born into a system that they had no part in constructing. They could protest or take action against it only at great cost to themselves. I thought, too, that a journalist should try to make sure that his reporting shed new light on the situation rather than merely covering aspects of it already familiar to his readers. That was a worthy aim, not always easy to achieve.