Fred Hunter covered sub-Saharan Africa for The Christian Science Monitor in the early 1970s. Here’s the second of several accounts of a trip to Southern Africa before independence swept the region and everything changed.

After interviewing and writing stories from Joburg, Donanne and I pushed on to Windhoek, the capital of diamond-rich South-West Africa (now Namibia), then a UN trust territory administered by South Africa. Windhoek was then a sleepy, very German town; Germany had colonized South-West before World War I and many Germans still resided there.

When Donanne and I checked into the Continental Hotel, an African bellman escorted us to our room. As we rode up in the elevator, he quietly sang, “We Shall Overcome.” The three of us smiled together.

In my interviews I had the pleasure of connecting with and getting tips and contacts from the tall, red-haired and very courageous 24-year-old David De Beer, the lay treasurer of South-West’s Anglican Diocese. David had reported for the BBC on a recent strike – striking was a dangerous tactic in South-West – by contract laborers of the Ovambo tribe.  They had rioted, destroying hundreds of unassigned beds in the suddenly famous Ovambo compound where the municipality housed them.

David’s opposition to the South African government acted as a provocation of the sort that only a young person would attempt against an authority able to take measures against him. (David was later declared a banned person, banning being a sort of house arrest in which he could not be in the presence of more than two other people at one time. Journalists being anathema, it would also have precluded me from interviewing him again.)

Since the strike occurred in the walled Ovambo compound, gaining access to it was a tempting idea. But the authorities were not likely to authorize a visit. So I simply walked in. It was the middle of the morning; the contract workers were at their jobs. The compound was virtually empty. I entered a building and took an up-close look at the way the workers were housed, at the “beds” they had destroyed. These were not beds at all, but structures of wood and stucco built onto the floors. On my way out I encountered a police squad car entering the compound to check out a report that a white man was walking around inside. (It must be said that the South African police who had a reputation for brutality never gave me any trouble and they did not on this occasion.) 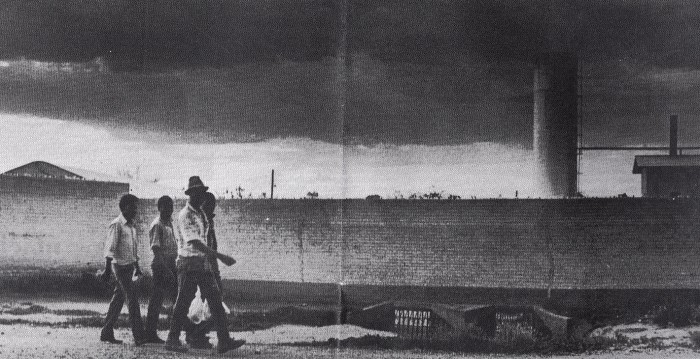 Outside the Ovambo Compound, Windhoek, South-West Africa (now Namibia) as photo appeared in The Monitor

We pushed on from Windhoek the following Thursday, arriving in Cape Town. We stayed in the Cape for ten days. My daily log for February 19 notes my meeting “David Curry, Deputy Leader of the Coloured Labor Party at 9:20. Tour with Curry and six United Party MPs [the United Party was the opposition to the dominant National Party] to Macassar Coloured Township and Bellville Coloured ‘Transit Camp,’ a shocking shantytown.” This visit made me an eye-witness of the poverty and deprivation in which non-whites lived.

Donanne and I drove from the Cape through the Bantustan of the Transkei, “homeland” of the Xhosa people, to Durban. At Fort Hare University (for Africans) at Alice I interviewed an infuriating Afrikaner university official who suggested that Africans should emulate the way in which the once-deprived Afrikaners had pulled themselves up by their bootstraps. I noted that Afrikaners had always possessed the vote, which they had successfully exploited to take control. He acknowledged that the Afrikaners would never make that mistake with Africans whom he conveniently presumed would be perpetually unprepared to exercise it.

In King William’s Town we had tea with Reverend David Russell, an intense young cleric consumed by the injustices to Africans and committed to a battle that would not be won for years. He showed us an Oxford University Press History of South Africa that included a chapter of blank pages by Professor Leo Kuper (with whom I had done African Studies at UCLA). The press had published Kuper’s chapter blank so as not to contravene South African government censorship. (I had the book with the complete text in Nairobi.) The Oxford University Press was walking a tricky tight-rope. Its volume had authoritative information important to South Africans. They were its major audience and depriving them of it made no sense. But accommodating South African censorship demonstrated why the battle of David Russell and others would take so long.

Wanting to provide readers a sense of how that drive through the eastern Cape had struck me, The Monitor ran a front-page Focus column datelined Port Elizabeth, South Africa.  It started this way:  “We drove two full days in the rain. At the end of each day we passed Bantu walking away from the town. They were women, house servants in cloth coats, men trudging alone or in pairs, rainwater coursing off their hats.

“We saw no whites on the streets. Outside the towns we saw where the Bantu were going. Off the road in open country there would be a collection of small houses, metal-roofed, with outhouses in the back. The Bantu would walk up muddy tracks toward them, past people waiting at communal faucets to get water in the rain.

“At the Magistrate’s Court in Zwelitsha Township I asked for a permit to enter Dimbaza Resettlement Camp.

“The official looked cold. He sat in an overcoat in the unlighted, unheated room. I explained that I had encountered no difficulty getting permits elsewhere.

“’If you were South African, I could give you a permit,’ he said. ‘But you can’t go to Dimbaza.’

The column went on to recount Reverend David Russell’s report of who the inhabitants of the townships were: Africans who had lost their rights to live in white towns; widows, women deserted by their husbands, people under disciplinary council or those forced off farms.

In Umtata, the Transkei capital, I interviewed the tall, hyper-dignified and inscrutable Kaiser Matanzima, the Bantustan’s Chief Minister. The hostility I felt from him may have sprung from the hostility he expected from me. Most journalists disdained him as a tool of the apartheid government. As we talked, he told me a bare-faced lie. I easily checked it out the next day. (Thus, unfortunately, he deserved disdain.)