Fred and Donanne Hunter were living in Nairobi, Kenya, his base for covering sub-Saharan Africa as a correspondent for The Christian Science Monitor when they decided to start a family.  Donanne offers a multi-part account of having a baby in 1970s Kenya. 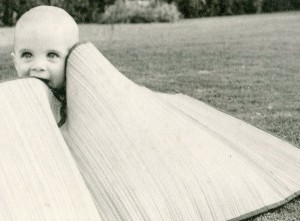 The trip was not a long one – just across town.  We had been waiting the better part of a year to start this new adventure: a short trip at the beginning of a long journey.  I was going to Nairobi Hospital to have a baby.  Two months earlier we had returned from a stimulating nine-week reporting jaunt through seven countries.   Traveling “with child” turned out to be effortless as we ventured into South Africa, Rhodesia (now Zimbabwe), Botswana, South-West Africa, Swaziland, Lesotho, Mozambique and Madagascar.

More than one friend in the States was concerned about my giving birth in Africa.  She thought I might deliver my first-born “under a bush” or in a mud hut with just the stunning East African sky – that blue sea across which sailed orderly armadas of white clouds – for company.  (In fact, one of our good friends had returned three times to the States to have her babies.)

In the first place, mile-high Nairobi, 300 kilometers inland from the Indian Ocean, was no “hardship post.”  No tropical outpost.  The temperature was moderate.  The seasons were: the short rains, the long rains and no rain.  Situated on a plateau two degrees south of the Equator, the sun set at just about the same time all year round. 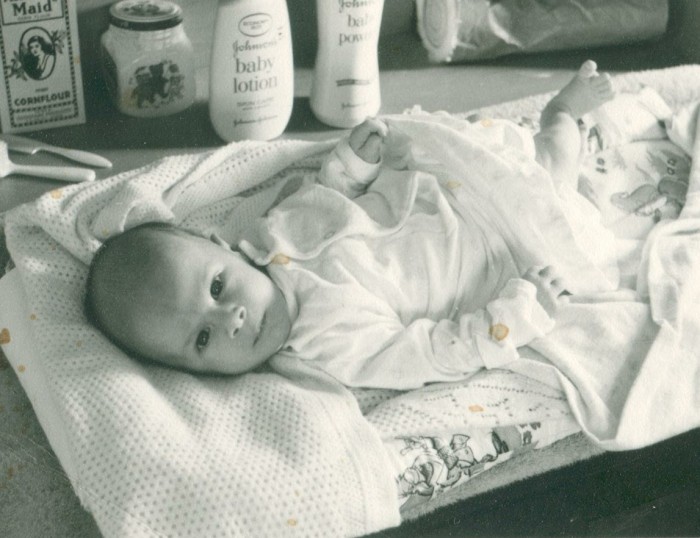 And unlike some agricultural aid workers or Peace Corps volunteers, we lived an urban life.  The house we were now renting stood at the far end of a cul-de-sac called Riverside Paddocks (so named by our horse-lover landlord who had once kept race horses and a pet ostrich named Daisy).  It was not cow dung-and-wattle, but a small, pretty stucco bungalow with a tile roof, parquet floors, a fireplace – light, airy and very livable.  I had “decorated” in assorted colors of raw burlap from a factory in the city’s industrial area out near the international airport. It boasted three bedrooms, one and a half baths, a living room, dining room, kitchen, a porch with louvered windows which became Fred’s office – and a separate room beyond the kitchen courtyard occupied by Laban, who helped us with the house and garden and educated us in things Kikuyu.  The living room and office overlooked the spacious backyard with a pepper tree in the middle of it.

Although the short front drive was ungated, we shared stone walls with neighbors on either side.  The wall at the back of the garden had a latched gate and looked out on an expanse of open land and a distant stand of eucalyptus.  It must have been a great space for running because our landlord occasionally brought Olympic hopefuls through the yard and out the gate for a sprint.  Once, before they disappeared into the morning, he introduced us to Kipchoge Keino who would soon be the first Kenyan to bring home an Olympic gold medal. 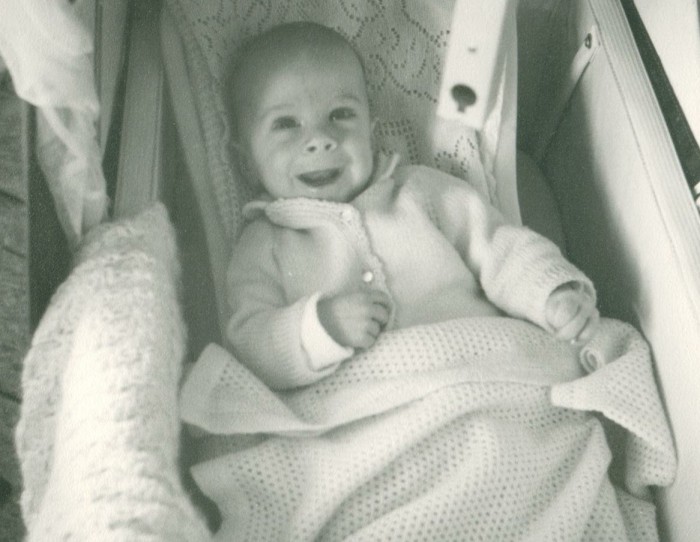 The expansion of our family took an unexpected turn one day during my eighth month as I glanced out the living room window into a bed of geraniums.  My eye followed a ray of sun shining down between the leaves onto the furry white tummy of a tiny sleeping kitten.  Its mother, we soon discovered, was wild, an abandoned house cat that had given birth in the woodpile off the kitchen stoep (Afrikaans, stoop in English).  Feather B. the kitten, as she shortly became known, would sometimes accompany us on our walks around the paddocks trotting along with her plume-like tail upright, gracefully waving, the tip slightly canted.

Under the pepper tree in the garden we had arranged a table and chairs of bent wood, bought at a roadside stand on the outskirts of town.  Late almost every afternoon we had tea beneath it and listened to the BBC’s African Service.  Seasonally we had to move the table out from under the tree to avoid having thumb-sized caterpillars fall onto the tea tray.  The tree would eventually become a perfect spot near which to park the pram for afternoon naps, covered with camouflage green netting as defense against the invasion of bright caterpillars and other creepy-crawlies.  We were assured that to protect their eyes from the strong Equatorial sun, babies born at this altitude are blessed with long lashes.  This would prove to be true at our house.

Fortunately, fragrant frangipani grew in abundance across from the entry door.  (The scent of night-blooming jasmine had pervaded our first Nairobi house on the coffee plantation.  But it wasn’t until I expectantly planted jasmine outside our bedroom window at this new house that I discovered that not all jasmine has perfume.)  Lantana thrived along the front of the house and a bright orange-blossomed vine draped itself festively over the kitchen courtyard walls.  Long after dark we would fall asleep listening to the haunting, sad, sweet lullaby of the night jars. Despite what my American friends might think, it was a truly fine place for a baby. 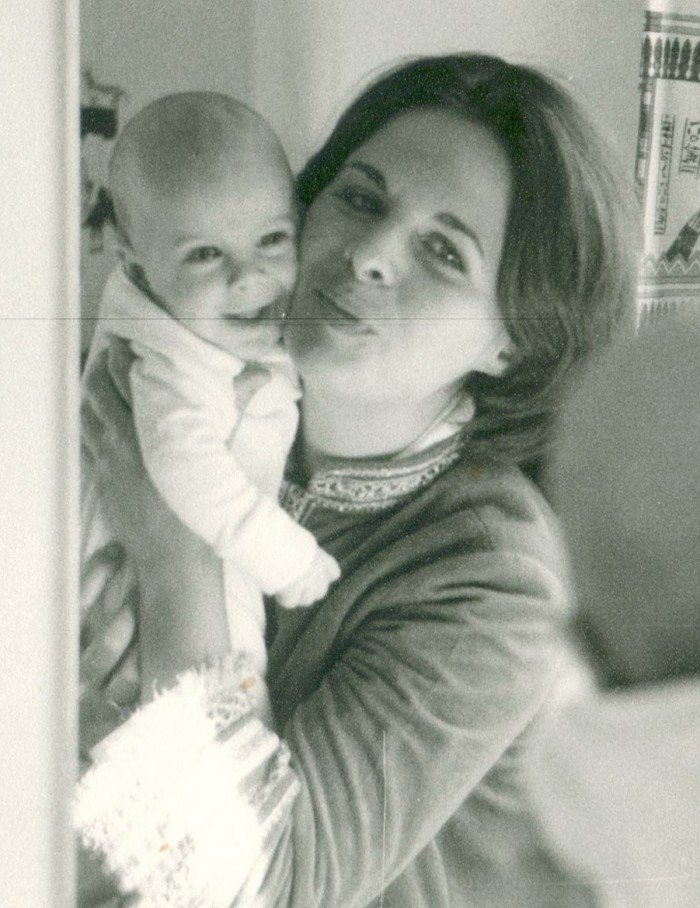 We began to furnish the baby’s room – handily complete with sink – by answering “adverts” in the press, the Daily Nation and the East African Standard.  Our first big purchase was a handsome wooden Kenyan crib for $24, less than a third the price of an imported one.  An American friend loaned us a plaid pram that conveniently converted to a car-bed.  We soon added a sturdy wood chest of drawers/changing table.  Our “must-have list” also included a rocking chair for lullabies.

Occasionally during evenings-on-the-town we’d treat ourselves to filet mignon at the newly-opened Hilton followed by the current English comedy performed at the resident rep company at the Donovan Maule Theatre.  (The total cost for the evening: $12.)  On the play’s set one night we spotted our rocker – in designer bamboo!  The next day we traced it to Flair, a small decorator store.  We splurged.  We also acquired its companion, a bamboo straight chair.  The latter completed the furnishings for the nursery, and the rocker added FLAIR to the living room beside the fireplace.

All the trips we had taken in Africa had known starting dates.   So did this one, thanks to my periodic visits to a kindly English physician, Dr. Mary Robertson-Glasgow, who’d delivered the babies of two of our friends.  (I had thought Dr. Mary simply an obstetrician and I didn’t know she was a G.P. until, on one of my visits, I passed a man coming out of her office!  Then I noticed the initials after her name.)  She estimated that the baby would arrive on June 1st.

On Sunday, May 28th, Fred and I went to the Norfolk Hotel attracted by their famous Sunday specialty, the fabulous curry lunch.  Ever since then we’ve maintained that that memorable (and spicy!) meal prompted what followed. Early the next morning something very strange happened on my way to the bathroom.  My waters broke.  I woke Fred with mystified squeals.  What an exciting moment!  He jumped out of bed and rushed to my side.  We laughed and looked at one another knowing our journey as parents was about to begin. 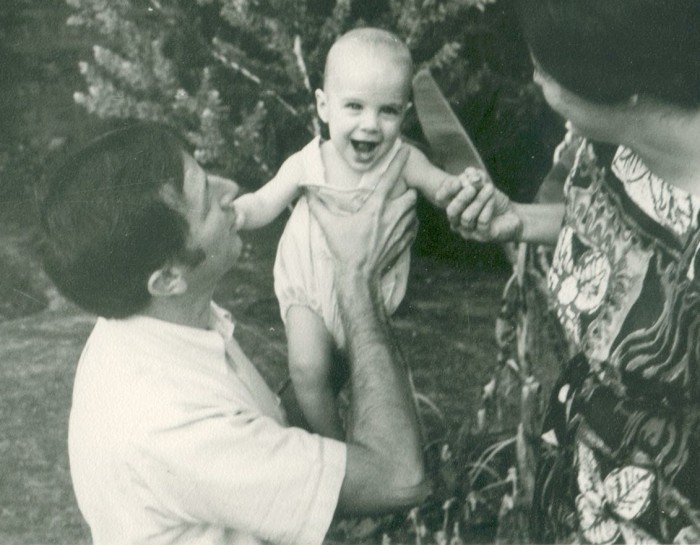 TRAVELS IN AFRICA: A Journey into Parenthood #2, Kenya, 1972