Fred Hunter covered sub-Saharan Africa for The Christian Science Monitor in the early years of the ‘70s.  Here’s the fifth and last of several accounts of a trip to Southern Africa before independence swept the region and everything changed.

Madagascar floats (but only metaphorically) tranquilly 250 miles off the African coast.  It struck Donanne and me as not African at all.  Not surprisingly.  Malagasies, the basic population, are Malay-Polynesian.  Their ancestors came originally from the east, across the Indian Ocean.   In some locales Madagascar resembled Hawaii.  In others it reminded us of Mexico.  Or the Far East.  Parts of its capital city had a pronounced Gallic flavor, a legacy of 60-plus years of French colonial rule.

We spent a week mainly in that capital, Tananarive.  We had been on the road for two months.  Donanne was now well into her seventh month of pregnancy.  We had gotten so used to her appearance that we did not think she looked noticeably pregnant.  But when we were taken to a party of Radio Malagasy people by the USIS press officer, every man in the room immediately sprang to his feet.

This press officer, Fred Gaynor, could not have been more generous to us.  Divorced, single and occupying a large apartment, he insisted on sharing it with us, noting correctly that his beds would prove more comfortable than those at the downtown Hilton.  Fred lived a joyous bachelor life.  He clearly had many friends and many “friends.”  He ate out frequently; his refrigerator was virtually empty.

For a Saturday night outside the capital we drove south through the suburbs of the capital, past horse carts and rice fields and the plateau people’s burial tombs to Antsirabe, an old-time colonial watering spot, with Fred and the delightful Vivienne, a French girl born on the island.  The Hotel Truchet was splendid, if a bit faded, a monument to a bygone era.  Donanne suggested I retreat to the balcony, which I obediently did, when she went through the beaded curtain that served as the door to the bathroom.  The bed, very much in the French style, sagged in the middle, pushing its occupants together, more satisfactory to Fred and Vivienne than to Fred and Donanne.

We two couples went to see the original, Michael Caine version of “The Italian Job” in a small theater filled with young Malagasies.  It was unclear how much they understood of the movie for it seemed not to bother them that the projectionist showed reels of the film out of sequence.  The oversight proved noticeable, however, to native speakers of English.  After whisperings back and forth, I went to the projection booth and tried to explain in fractured French why the movie made even less sense than it was meant to.  No reaction.  Well into the mistaken reel, the projectionist apparently understood what I had been trying to convey.  He stopped the movie and showed it over again in its entirety. 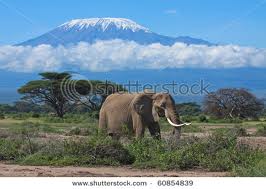 After Tananarive, home to Nairobi.  We flew at night, in moonlight.  Below us a mountain rose up, silent and majestic, with a great saddle of snow.  It was late.  The pilot decided that sleeping passengers would not want to be wakened to learn what was below.  We suddenly realized it was Mount Kilimanjaro.  We recognized it because on the summit we made out the form of the “dried and frozen carcass” of the leopard in the Hemingway story that bears the mountain’s name.

Can you find the leopard on Kilimajaro? (internet photo)

Next post: Meet the best thing we got out of Africa!