When Fred and Donanne Hunter spent a weekend in Mbere District near Embu in Kenya, they met teenagers Anastasio and Barnabas.  Two years later, weeks before leaving Kenya, they connected with some Embu girls in Nairobi.

It was late on a Tuesday afternoon, around 5:50 p.m., the last day of the run of Franco Zefferelli’s film of Romeo and Juliet.   We arrived after the film had started – in fact, in the middle of the first fight.

Lettuces were rolling across cobblestones, women were shrieking and tradesmen scattering as Capulets and Montagues fought through the streets of medieval Verona.  Carrots and tomatoes flew at us from off the screen.  We had an odd sense of trying to dodge them as we looked for seats.

We expected the theater to be almost empty.  What, after all, did a Shakespearean play, four hundred years old, have to say to moviegoers of modern-day Kenya?  But the rear third of the theater was solidly filled – with teenagers.  We learned later that Romeo and Juliet was something secondary students throughout the former British Empire were being tested on.  So these students had come to take a look.

The film clearly connected with them.  They guffawed at Mercutio, a teen himself, spouting words at a fountain that was spouting water.  They cackled at Juliet’s nurse wrestling Romeo to her lap in church.  Perhaps surprisingly – certainly I was surprised – they found that Shakespeare could inspire real reactions, instead of merely reverential ones.  That Zefferelli’s Romeo and Juliet looked and acted like teens.  That the horseplay was funny and the sword play rough and exciting.

During the balcony scene, played with great ardor, we heard young voices softly whispering that poetry.  At the end of the scene one of them sighed with anguish, “Parting is such sweet sorrow.”  I stole a glance behind us.  A dozen teen-aged African girls were sitting there.  They were secondary school students in school uniforms – gray wool skirts, white blouses and dark green blazers.  They were spellbound.  Their open-mouthed, wide-eyed faces all tilted upward toward the screen.

No wonder they were involved.  They were teens, after all.  Some of them may have already been deeply entangled in first love, perhaps even in star-crossed teenage romance.  The girls probably believed in love at first sight just as do so many American teens.     But they more than American teens were living in a society with fairly close parallels to medieval Italy.  If they were Kikuyu girls – as it turned out they were – any idea of marrying a Luo boyfriend was as unlikely as a Capulet marrying a Montague.  Just as Juliet’s father was determined to marry her advantageously to Count Paris so these girls’ fathers might be lining up middle-aged men to marry them, perhaps even as second or third wives.  It probably depended on how bounteous was the bridewealth.  These girls would be expected, despite a secondary education, to do as their fathers directed.  The teen version of true love might be something that some of them considered dying for.

Certainly, when Juliet awakened in the tomb, a hush fell over the theater.  The tension grew when she came upon Romeo, dead by his own hand, and gazed at him with confusion.  Not a sound in the theater when she whispered, “Your lips still warm!”  When she picked up his flask of poison, then lifted his dagger, the girls behind us knew what she was considering.  They drew in their breath.  “Don’t!” they whispered.  “Don’t!”

A strange sensation of animal dread exuded from the row behind us.  Then Juliet drove the dagger into her heart.  From the teenaged throats: muted gasps.

A few moments later the movie ended.  The lights came on.  Donanne and I were catapulted out of medieval Verona back into modern-day Nairobi.  We filed out of the row, knowing the story had ended.  Soon we would be walking over to the Hilton coffee shop to enjoy the best American hamburgers on offer in East Africa.

Not so the school girls behind us.  The story had not ended for them.  They remained in their seats.  Some had tears in their eyes. 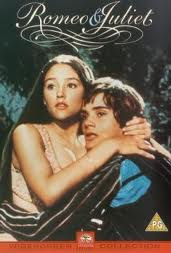 When they finally got up, I asked one of them, “Where are you from?”

“Embu.”  The girl replied softly, not wanting to break the mood into which the film had plunged her.

Embu is a small Kikuyu town two hours north of Nairobi.  If the girls were returning there by bus, they would have time to stare at the darkness lying across the countryside and think about the play. Most of Embu’s people are peasants just as those of medieval Verona must have been.  Unemployment, the difficulty of securing school positions and the pattern of rural life all combine to give particularly teenage Kenyan guys a good deal of time to loaf about the open-air markets and the bus stops just as Romeo, Tybalt and Mercutio hung out in Verona’s piazza.  There they will look suspiciously at any young Kambas or Kalenjins or Luos who happen to be there.  An Embu girl in secondary school probably has a rich father.  She understands that she will be expected to marry well and inside her tribe – not with some teen, however handsome and well-spoken, from outside the tribe

I asked the Embu girl, “Did you enjoy the movie?”

She was pretty and very silent.  She nodded and gazed at me with large dark eyes.

“Do you think Juliet was foolish,” I asked her, “to kill herself like that?”

She looked at me for a very long moment.  “No,” she finally said, “I do not think she was foolish.”

Over hamburgers at the Hilton I mused about the girl.  She had a couple of hours, until she returned to Embu, to remember that children, not a spouse, were the basis of the affections in Africa.  On the bus ride she would realize that Romeo had been young and impulsive, that Juliet would have been happier to let her father direct the path of her life and choose for her a husband who could provide for her and give her those children.

Next post:  As we prepare to leave Africa, a serious problem arises with Murugi.

Already considering books as holiday gifts?  Think about JOSS The Ambassador’s Wife or ABE AND MOLLY: The Lincoln Courtship. Look them over at www.FredericHunter.com.